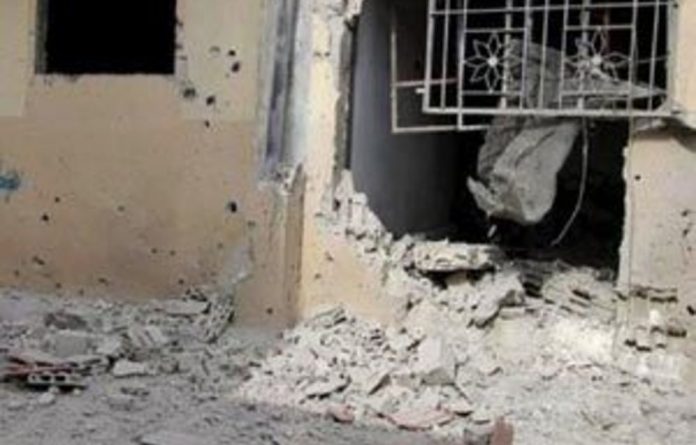 Syrian troops sealed off the population of a rebel stronghold in the city of Homs on Thursday and bombarded it using tanks, helicopters and artillery, as the international community struggled to find a common voice with which to confront President Bashar al-Assad.

Eyewitnesses said roads in and out of Baba Amr, in the south-east of Homs, were blocked, preventing the evacuation of children or the wounded, and food, water and medicine were running out fast in the besieged suburb.

The international community appeared to flounder over a coherent response. The UN secretary-general, Ban Ki-moon, condemned the Russian and Chinese veto of a Security Council resolution on the crisis over the weekend as “disastrous for the Syrian people”. He said the failure to agree on collective action “has encouraged the Syrian government to step up its war on its own people”.

The UN and the Arab League proposed a joint observer mission and talks continued over the formation of an ad hoc “friends of the Syrian people” group to put pressure on the Assad regime without help from Moscow and Beijing.

Speaking at an international gathering in Sweden, David Cameron said: “It is quite clear that this is a regime hell bent on killing, murdering and maiming its own citizens … we need to take the toughest possible response we can.”

Incremental approach
The options the prime minister listed, however, reflected a cautious, incremental approach the UK and other western governments have pursued after the Security Council debacle. “We also need to work with the [Syrian] opposition to try and help shape their future and assist them in whatever way we can. We also need to put together the strongest possible contact group of like-minded nations,” Cameron said.

In the absence of international consensus, there was no sign of any decisive action that might stop the worsening bloodshed in Syria.

More than 100 people were reported dead in Homs on a day of heavy bombardment by government forces but the figure could not be independently confirmed in the absence of observers or humanitarian organisations. A local resident, Basil Abu Fouad, said it was impossible to estimate casualties accurately.

“We can’t count the number of the dead in the rubble. When we pull someone from the rubble, we don’t know if they were killed today, yesterday or before,” Fouad said by phone from a basement in Baba Amr. “They are using helicopters and mortars and tanks, T-72 [former Soviet] tanks. Hundreds of homes have been demolished and they have come down on the heads of their owners.

“Communications have been completely cut off between neighbourhoods. The army have blocked access to the city. Some people tried to escape but they found all the roads were closed. There is no food left in the city. We don’t have milk. All the water tanks have been targeted. We don’t have medicines. If you go to the shops and try to get in, the snipers up on the roofs will shoot you,” he said.

“The children will die here. All the people want is to escape. They can smash this place if they want. We just want to get out of there. But they won’t allow us.”

Powerless to fight back
Another Homs resident, Abu Karam, watching from the nearby Karm al-Zeytoun district, said: “From my roof, I can see rising smoke from Baba Amr. It is surrounded. They can’t get anything in or out.”

Another man from Baba Amr, identifying himself as Lieutenant Omar of the Free Syrian Army, said the rebel force was powerless to fight back against rocket and shell fire. “All we do is to pull people from the wreckage.”

Dani Abdul Dayan, a resident of the Insha’at neighbourhood, next to Baba Amr, claimed the army had taken over the al-Hikma hospital, expelled the doctors and was using the patients as human shields. The claim could not be verified.

Writing in the Guardian, the Chinese ambassador to the UK, Liu Xiaoming, defended Beijing’s decision to veto the UN resolution setting an ultimatum for Assad to step down.

“Chinese people abhor the violence and bloodshed in Syria as much as those in Britain and other countries. China voted against the resolution for a simple reason: the resolution as drafted will not help cool down the situation. It does not facilitate political dialogue. It does not address distrust, or bring peace and stability to the region,” Liu argued.

In Homs, Fouad claimed the Security Council veto had given the regime a green light to commit genocide against the Syrian people. “The whole world is against us. Nobody is helping us,” he said, before the electricity failed. “There is nothing left to pray.” —