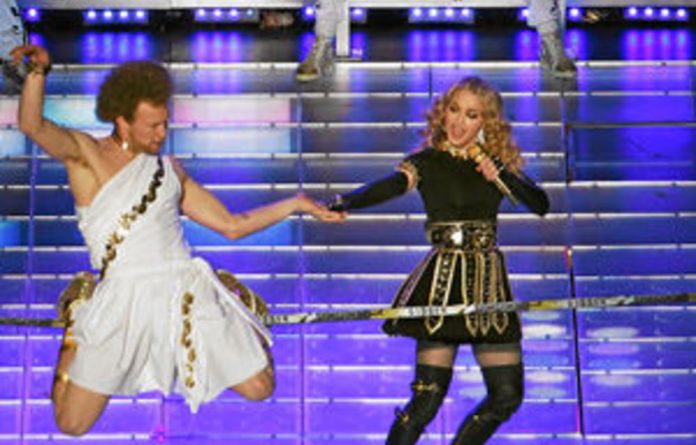 The first public appearance of Madonna’s MDNA album campaign was a low-key affair: just the biggest night of the American football calendar, more than 100-million viewers, a collision of some of the planet’s biggest pop personalities, and a budget that makes your average James Cameron effort look small. The half-time Super Bowl show prompted much chatter, but here are the five Madgic Moments:

The entrance
It’s hard to mistake Madonna’s fantastically overblown arrival — pulled by centurions, flanked by a pair of sphinxes — for anything other than a direct homage to Elizabeth Taylor’s entrance as Cleopatra in the 1963 film of the same name. Unless one happens to be a Kylie fan.

Pop fandom in 2012 is characterised by a frenzied desire to pit female artists against each other in their own gladiatorial battle of who-copied-who, and Minogue fans immediately started squealing about similarities to Kylie’s Aphrodite Les Folies tour. Why can’t we all just get along?

The outrage
During her guest spot, MIA “flips the bird”, offending America’s easily offended and prompting an almost immediate apology from the National Football League. Hipster music website Pitchfork, not well known for its appreciation of fun times, is so confused by whether or not to be angry about MIA’s involvement in a Madonna song that its moralitymeter apparently shortcircuits, resulting in a ludicrously puritanical opinion piece criticising MIA for the “obnoxious moment”.

The miming
Though fans of the live vocal will have been pleased by Cee Lo Green completely oversinging his contribution, they may have been disappointed that most of the show’s vocals were clearly mimed. Fear not, there’s not long to go until Ed Sheeran takes to the stage at this year’s Brits, and if you are the sort of person who wanders away from a Madonna Super Bowl show shaking your head about lipsynching, you may need to work on managing your expectations. (Or at least examine last year’s painfully unmimed Black Eyed Peas Super Bowl performance.)

The best move
One dancer’s ludicrous legwobble aside, the most notable move of the whole performance came when Madonna performed with self-styled “party-rocking” dance pop duo LMFAO. After repeated viewings it’s still hard to tell whether it’s intentional, but having interfered with Redfoo’s cape, Madge puts both hands on the stage, places one foot in his hand and waves the other one around in the air before executing a backwards spin and declaring, triumphantly: “I’m sexy and I know it.” Her announcement does feel a little bit like that thing you do when you half trip over in the street then try to style it out as intentional, but expect one or two attempts to recreate it at nightclubs next Saturday.

The goodbye
What’s that noise? It’s the unmistakable sound of the world’s guns and bombs being melted down and recast as little ornamental kittens, and we have Madonna to thank. As the show finishes and Madonna descends through the stage (“BACK INTO HELL NO DOUBT!!!” — Pitchfork), the pitch lights up with a simple message: “WORLD PEACE”. Are you listening, Kylie fans? Are you listening, Pitchfork? Let’s hug this one out. —