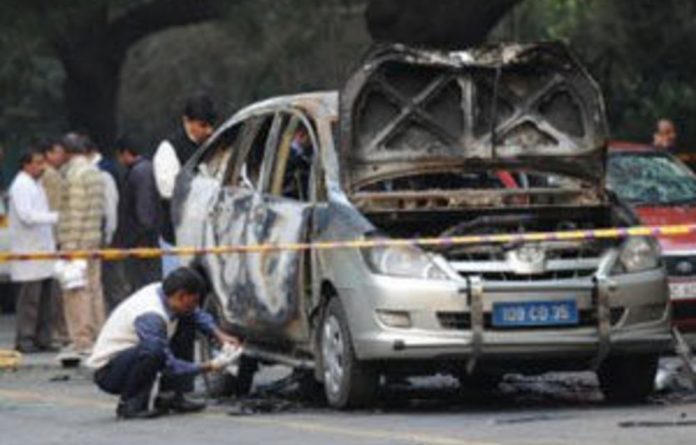 Israeli diplomats were targeted by bomb attacks in Delhi and Tbilisi on Monday, officials said, with two people injured in the Indian capital when an embassy car exploded in a ball of fire.

The car which blew up in a high security area of central Delhi, a short distance from the Israeli embassy and Prime Minister Manmohan Singh’s official residence, was badly burnt.

Police in the Georgian capital defused an explosive device found in the car of an Israeli embassy employee, the ex-Soviet state’s interior ministry said.

Ravi Singh, a petrol pump attendant who was standing on the other side of the road from the Delhi blast, said: “There was a huge explosion. There was a woman and a driver in the car which was burning and the woman was dragged out.”

Israeli embassy spokesperson in New Delhi David Goldfarb said that one of the injured occupants of the car was an Israeli diplomat but declined to comment further. An Israeli security official said the diplomat was a woman.

Indian police cordoned off the area surrounding the burnt-out station wagon and investigators were at the site.

Experts’ report
“We are examining the materials at the site and we are yet to get the experts’ report so we still cannot say how the blast occurred,” said New Delhi police spokesperson Rajan Bhagat.

He said there were no details about the condition of the two injured people but television reports said that one was in a critical condition.

A photograph on NDTV television showed flames shooting out of the vehicle when the explosion occurred.

“There was an explosion in an Israeli diplomat’s car but we don’t know how it happened, Goldfarb said.

“We are in constant contact with the local authorities.”

Israeli foreign ministry spokesperson Yigal Palmor said in Jerusalem that Israeli authorities were investigating the blast in New Delhi as well as the incident in Tbilisi.

Travel warnings
“We are looking into both of these incidents and cooperating with the local law enforcement agencies,” Palmor said.

The attacks came between the anniversaries of the deaths of two top Hezbollah militants, Imad Mughniyeh and Abbas Mussawi, which spark annual travel warnings from the Israeli government.

Top Hezbollah commander Mughniyeh was killed in a car bombing in Damascus on February 12 2008, while Mussawi, the group’s secretary general, was killed by an Israeli missile on February 16 1992.

Both attacks were blamed on Israel and sparked vows of revenge from the Shi’ite militia group.

A Jewish centre run by the ultra-Orthodox Lubavitch movement was among the targets in the November 2008 attacks in Mumbai, which India blames on the Pakistani-based Lashkar-e-Taiba, in which 10 gunmen killed at least 188 people.

The last militant strike in New Delhi was last September when a bomb outside the High Court killed 14 people — the latest in a series of blasts that has shaken public confidence in the Indian government’s counter-terror capabilities. — AFP