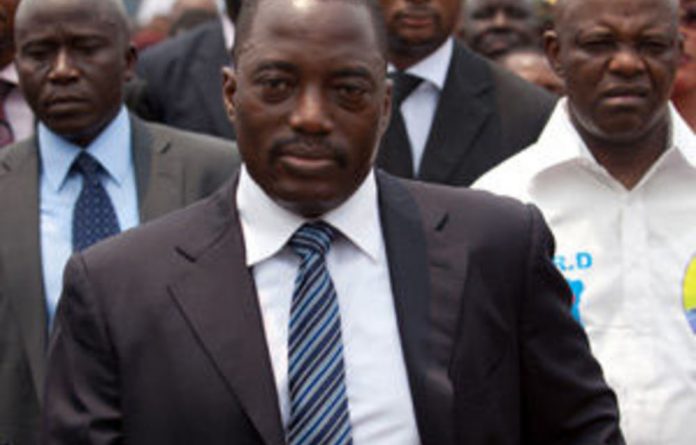 A close aide to Democratic Republic of Congo (DRC) President Joseph Kabila was killed and the country’s finance minister seriously injured in a plane crash on Sunday in the east of the country, the president’s office said.

Two US crew members also died, as well as two people crushed by the plane as it came down at Bukavu airport.

The statement identified Kabila’s aide as Augustin Katumba Mwanke (48) considered a key member of Kabila’s entourage, who had the ear of the president.

Finance Minister Augustin Matata Ponyo was in a serious condition, while Sud-Kivu governor Marcellin Tshisambo had suffered fractures in both legs, said an airport official.

The plane overshot the runway at Bukavu airport, the president’s office said.

“The toll is three dead among those on board the plane: Mr Katumba Mwanke, the US pilot and copilot,” Interior Minister Katumba Mwanke told reporters.

“There were also two farmers, whose bodies were found under the plane,” he added. The plane was carrying nine people, including the crew, he said.

Mwanke and the pilot had “died on the spot,” a source at the presidency said.

Misjudged runway
The twin-engine Gulfstream 200 had flown in from the capital Kinshasa via Goma and apparently missed its landing at Bukavu airport, in the vast country’s east.

“It touched down only halfway down the runway and went skidding into a ditch beyond the runway. The plane is damaged,” a Bukavu airport official said on condition of anonymity.

“The weather was good, I think [the pilot] might have misjudged the runway because [this is] the first time this crew was flying to Bukavu,” he added.

The accident happened at around 2pm (midday GMT).

Antoine Ghonda, a lawmaker who had previously served as a roving ambassador for Kabila, was also among the injured, the airport official added.

Mwanke had won re-election last year as an MP from southern Katanga for the ruling People’s Party for Reconstruction and Democracy (PPRD), of which he was a co-founder.

He was criticised in a report by UN panel of experts as having used his leverage in Kinshasa to obtain substantial tax exemptions for a mining company of whose board he was a member.

Sanctions
This network had transferred assets worth $5-billion from the state-owned mining sector to the private companies they controlled, without paying any compensation to the treasury, said the UN report.

The UN panel had recommended sanctions including travel bans, freezing personal assets and barring access to banking facilities against Mwanke and several other officials.

They were all suspected of links to criminal cartels, which included Congolese and Zimbabweans, that were plundering the country’s mineral resources.

Tshisambo was a political adviser to Kabila before his election as Sud-Kivu governor in 2010.

Plane crashes are frequent in the DRC.

Some 50 airlines operate in the vast Central African country, all of which are on a European Union blacklist barring them from operating in the EU because of their safety record. — AFP