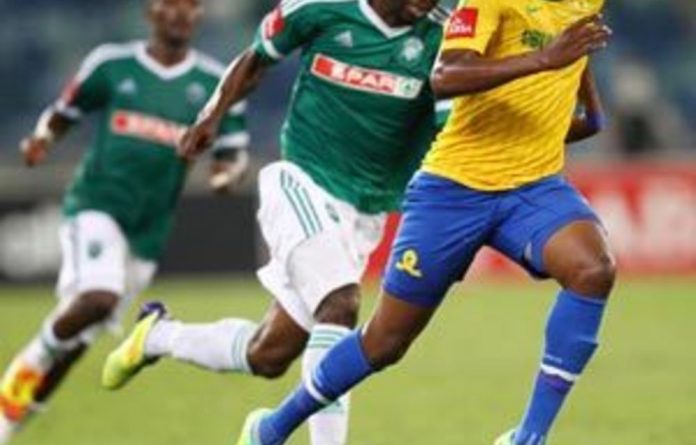 While Sundowns coach Johan Neeskens was pleased with the three points from the 1-0 away win over AmaZulu courtesy of a Tsweu Mokoro own-goal — he felt that his charges were far from perfect in the encounter.

“I can only say that I’m happy with the three points, but not with the performance,” he said.

They now carry 34 points after 16 matches with a four point lead over second-placed United (29 points), who drew 1-1 with plucky Free State Stars in Atteridgeville.

On the same number of points are Kaizer Chiefs, who were also held to a 1-1 draw by Jomo Cosmos in Port Elizabeth and Moroka Swallows, who beat Santos 3-2 in a thrilling goal-fest in Dobsonville.

Saved some blushes
Chiefs were seven minutes away from a shock loss before striker Lehlohonolo Majoro equalised to save his side some blushes after Mark Haskins had given Ezenkosi a second-half lead.

While three points would have given Cosmos some breathing space in their relegation battle, they still move up a place to 15th on the standings, albeit because of a better goal difference.

“We are playing good football and after the way we played against Chiefs, I think I will sleep well and I’m more convinced that we will not be relegated at the end of the season,” said the side’s coach Jomo Sono after the match.

At Orlando Stadium, Pirates beat Black Leopards 1-0 to maintain fifth spot on the table, though, the defending league champions were rusty in their performance.

“We had two or three more opportunities to increase the lead but our final pass and finishing was not adequate,” Pirates coach Julio Leal, said.

“Importantly we got a result and three points that will help us. But we still need to improve our capacity.”

Consolidation
The loss saw Leopards move down a spot to the bottom of the log.

“In the first half we looked shaky but I do believe we were better in the second,” said the Limpopo outfit’s coach, Vladislav Heric.

“We need consolidation at the back, but you see, the defence wasn’t good because the midfield did not work properly.”

Both sides now prepare for their respective continental club competitions this weekend.

The Buccaneers play in the Caf Champions League, while Lidoda Duvha will venture to the Caf Confederations Cup tournament.

Wits played to a 0-0 draw with Maritzburg United at Bidvest Stadium. — Sapa