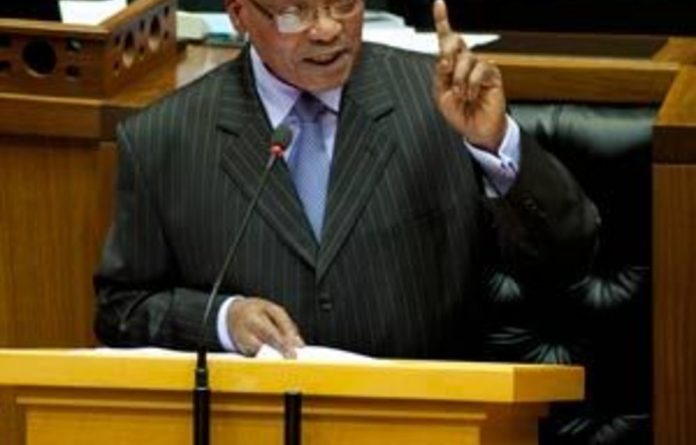 Responding to the the debate on his State Of The Nation address, Zuma said Mulder had “stunned the whole country” with his “bold denial of historical facts about land dispossession”.

“The land question is one of the most emotive issues in our history and present, and must be handled with utmost care, and not in the careless and callous manner that Honourable Mulder handled it,” said Zuma.

Mulder on Wednesday raised the ire of many South Africans by claiming “black ‘bantu-speaking’ people had no historical claim” to 40% of the country’s arable land.

“There is sufficient proof that there were no bantu-speaking people in the Western Cape and north-western Cape,” Mulder told Parliament.

He was responding to the president’s statement that the willing-buyer willing-seller option had “not been the best way to address” land redistribution.

The president then followed this up with a quote from John Langalibalele Dube — the first president of the ANC around the time of the implementation of the Natives Land Act of 1913.

“Europeans will never know the pain Africans felt by being forcibly driven off the land of their birthplace,” he read.

The Natives Land Act has been seen by many as the beginnings of apartheid as it effectively created a system that deprived South Africa’s black majority of the right to own land.

Zuma’s utterances were met with warm applause from ANC MPs and shouts of “Sack him!” and “He’s your minister, president — fire him!” from opposition MPs.

Mulder serves in Zuma’s Cabinet as deputy minister for agriculture, forestry and fisheries.

These quasi celebrations were halted though, when FF+ MP Pieter Groenewald asked speaker Max Sisulu if he could interrupt proceedings with a “pertinent question”.

“Do you think it is wise for ANC leaders to say white people stole the land and accuse them of being thieves?” Groenewald asked.

Zuma offered a wry smile and suggested Groenewald needed a lesson in history.

“I am sure you don’t want me to get to the real reason the land was placed in the hands of the minority. This is an emotive issue but that doesn’t change history,” Zuma said.

“We will follow the constitution and we are dealing with the land issue responsibly,” said Zuma.

Land ownership is a thorny issue in South African politics, with government claiming that up to 87% of South Africa’s agricultural land still in the hands of white farmers.

Government’s original plan to have 30% of this land diverted back to the black majority by 1999, failed.

Special report html code: For news and multimedia on the State of the Nation address visit our special report.