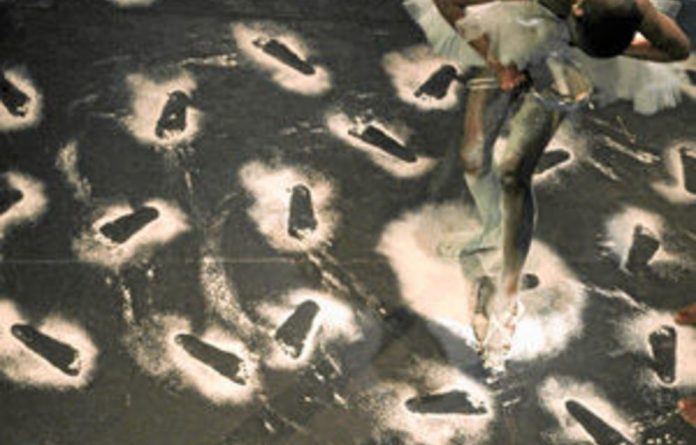 South African theatre dance retains its international reputation for cocking several snooks at conventions and political correctness in its pursuit of fresh expression.

Yet all too rarely in this maelstrom — often caused by issue-based experimentation — is there salient critical commentary or engagement about the ethics involved in the production of theatrical or site-specific performance. The late John Matshikiza set this ball rolling with his article headlined “White art, black themes” (Mail & Guardian, May 6 1999).

The introductory blurb poses the question: “The use of black iconography by white artists has angered many people. Is it exploitative or informative?” The writer focuses on Robyn Orlin’s Life after the Credits Roll — a Piece for Five Performers and the Spirit of Makana, staged that year in the Market Theatre Laboratory.

Dropping names
Matshikiza takes issue with the director choreographer’s use of the 19th-century Xhosa warrior and prophet for her own artistic whims. He quotes the text in which the characters are searching for the spirit of Makana and asks the questions: “But how does this justify using Makana’s name at all? Is it for the shock value once again? Orlin’s audience is mostly white and middle class. What is Makana to them, apart from an exotic provocation?

Matshikiza then addresses the ­ritualistic work of theatremaker Brett Bailey and quotes Orlin asking what black artists are doing about historical icons.

Fast forward to Dance Umbrella 2012 for some answers. Gregory ­Vuyani Maqoma may be a descendant of Chief Jongumsobomvu Maqoma, but drawing on that history is no less controversial. The theatre-dance work Exit/Exist is a collaboration by Maqoma, theatre director James Ngcobo, fashion designer David Tlale, composer Simphiwe Dana (who transposed her music for a capella), animator Mileta Postic and set designer Oliver Hauser.

Existential questions
A programme note states: “The core of this piece is memory, rephrasing the notion of existence and notion of simply existing in order to exist. Exit/Exist takes a moment to pause, look back; to rewind the tape to the days when the tapestry of South Africa was about the collision of biographies.”

True to Maqoma’s research-based choreographic approach, this creation is not simply a regurgitation of historical facts or oral history, but also a ­reinterpretation born out of deconstructing what the artists have encountered and perceived.

They have ­created a performance piece woven out of language (both recited and sung), myth, improvised and set movement, and ritual and symbolic design. Spectres of appropriation, authenticity and respect hover in the wings.

New questions to add to Matshikiza’s list: Who has the right to explore any country’s history or living heritage? Is it acceptable for non-South Africans, or non-Africans, to be involved in exhuming the past? Exit/Exist entails Maqoma’s border wars with the British in 19th-century Eastern Cape over the right to land and the ownership of cattle. One of these storytellers is the smoking-hot Italian rock guitarist Giuliano Modarelli. The choreographer is adamant that it is his right to work with whomever he chooses to serve his artistic vision.

Dismantling old forms
Similarly, is it appropriate to play the race or gender cards when artists tackle the annual reed dance? In her installation Uncles & Angels, Nelisiwe Xaba is joined by filmmaker and professional animator Mocke Jansen van Veuren, a white male who collaborated with the fearless provocateur on her Black! — White?

In the experimental voyage of discovery, do artists have the right to go the non-literal route to dismantle old forms, play with them and then produce fresh iconographic language and performance prototypes, no matter the cultural context?

Technology is also firmly part of this equation — video, film, live video feeds, motion capture and animation are contemporary dance staples. While Xaba is dealing with sensitive issues such as virginity testing and the mass objectification of the black female, Van Veuren is manipulating software to multiply Xaba’s supremely articulate body in an interactive video montage.

Curiously, in his deliberations Matshikiza ignored Orlin’s other 1999 piece, Daddy, I’ve Seen This Piece Six Times Before and I Still Don’t Know Why They Are Hurting Each Other, which premiered in the Wits Downstairs Theatre at the FNB Dance Umbrella on March 13.

Uber-manipulator
On reflection, perhaps it is not odd that Daddy was omitted from “White art, black themes”, because the performers and characters all speak for themselves, using their real names — aggrieved post-1994 South African artists. And central to that racially charged aesthetic fracas is the director-choreographer — the uber-manipulator herself — who never appears but constantly dictates by cellphone.

There is a serious subtext to this anarchic extravaganza that references Hollywood, the classical ballet canon and so forth. Politics of the body and of the skin are explored in vignettes captured by photographer John Hogg. One, of Xaba in a white tutu sifting white flour over her black, moving feet, won a 1999 World Press Photo prize. Who owns this iconic image? Bring on the debate.

The slain dancer and choreographer was so much more than an internationally celebrated artist. They were also a proud queer rights activist and a beloved child and friend
Read more
Coronavirus

With everyone settling into an indoors routine or starting to lose it because of cabin fever, this guide should remind you that creativity and beauty still exist, virtually represented but there, nonetheless.
Read more
Friday

Nyamza’s hatchling comes into his own

The choreographer transforms mundane acts such as chores, interacting with her son, self-doubt and receiving love into a 55-minute moving biography
Read more
Advertising
Continue to the category
Coronavirus