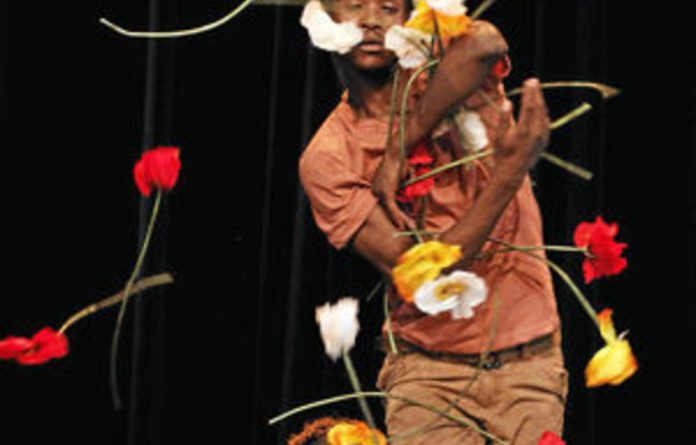 It is hard to bear witness; there is no sparing the trauma and its aftermath. Sometimes it is difficult to watch contemporary dance and often I leave a performance with my mind and soul in tumult. Our choreographers tackle sensitive, heart-breaking issues that ordinary South Africans are dealing with every day.

Why? Perhaps because it touches them on a deeply personal level and, in many cases, they are working with artists who have experienced major upheavals that have left lasting marks on their psyches.

On the programme of the 24th Dance Umbrella there are several works dealing with abuse, rape and Aids. I spoke to three choreographers whose commissioned works will premiere at the festival.

PJ Sabbagha has championed an outspoken, head-on approach to work that investigates Aids and its implications.

His Forgotten Angle Theatre Collaborative, relaunched last year as the Wits School of the Arts’ resident company, will present One Night Stand, a collaborative work with infection and invasion at its heart.

Chance, risk and spontaneity
“The notion of one-night stands and the fallout that comes from them was explored through a variety of really simple choreographic exercises and lots of talking,” said Sabbagha. “We interrogate concepts such as trust, promise, chance, risk and spontaneity. I wanted to access what these young people were thinking and the ­exercises gave rise to a stream of provocative images.”

He described the work as a departure for the company’s usual approach, with a strong move towards performance. Nicho Aphane has written the score and Tumi Maloka is responsible for the videography.

Sabbagha said that, initially, it was difficult to get the company to talk about their sexual behaviour.

“It’s a very private domain. There’s one young woman, Tertia Coetzee, and 10 young men, some who are openly gay and some who are massively macho. It is impossible to ignore their sexual expression. I asked them to push beyond their boundaries and familiar spaces.”

He said abuse in relationships went beyond the physical. “We’re always abusing the other person’s agenda and many seek only personal gain. The one-night stand has massive fall-out and often self-imposed torture, as well as the risk of infection, which is always heightened.”

Reeling from shock
In stark contrast, Mari-Louise Basson tackles her own demons in a work about the sexual abuse of children. I am still reeling from the shock of Basson (due to have her first baby in less than a month) revealing that she and her elder sister were abused by an uncle as children — hence the title, Uncle Stan’s Jane and John Doe.

She spoke openly about her ordeal and her need to highlight the plight of children who are abused and remain nameless and faceless. “We need honesty; sexual abuse of children just can’t be kept a secret. And yes, it’s a hard topic to translate into a dance work, but I am lucky to be working with Mzansi Productions, a big company of 12 dancers [including two Cubans and Aaron Smythe from Australia] who have been very sensitive to my approach.”

She has not followed a classical ballet approach, focusing instead on “release” work and finding the emotional content — the vulnerability, distrust and shivers when you feel breath on your skin and the memories it evokes.

She has introduced some aerial work that she learned from her partner, artist Pascal Angelier, who is based in France.

Mdu Mtshali, the third choreographer, spoke from Durban by phone about his new work, Imbokodo.

He was born and raised in KwaMashu and is a dance lecturer at the Durban Institute of Technology. “I hear so many stories about rape and Aids and a lack of acceptance in their communities. I need to tell those stories so people listen.”

Transposing pain to the stage
Mtshali is working with a largely female cast. How do these young women — students and graduates of the institute and the University of KwaZulu-Natal — feel about him transposing their struggles and pain to the stage?

“At first they were surprised when I brought my proposal to them, but we all work with respect and tolerance to uncover the silences, the distress, the sadness,” he said. Mtshali is also weaving poetry and song into his work and is known for his strong ritualistic and cathartic approach.

Choreographers may play with form, dabble with technology and flirt with design, but for these three and many others it is the explosive themes that they wish to put centre stage.

The slain dancer and choreographer was so much more than an internationally celebrated artist. They were also a proud queer rights activist and a beloved child and friend
Read more
Coronavirus

With everyone settling into an indoors routine or starting to lose it because of cabin fever, this guide should remind you that creativity and beauty still exist, virtually represented but there, nonetheless.
Read more
Friday

Nyamza’s hatchling comes into his own

The choreographer transforms mundane acts such as chores, interacting with her son, self-doubt and receiving love into a 55-minute moving biography
Read more
Advertising
Continue to the category
National