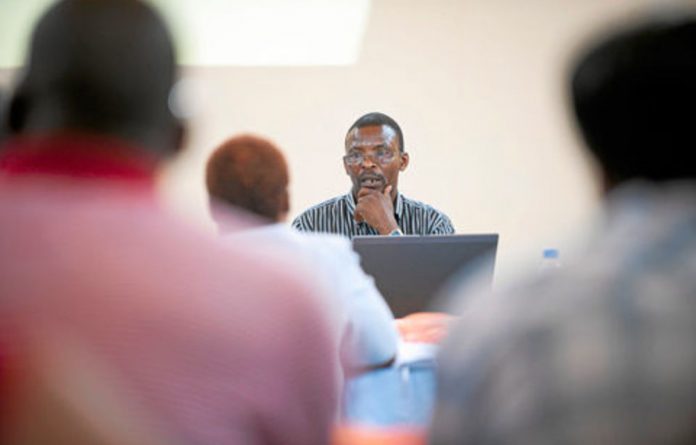 For refugees hoping to access South African universities, funding and deportation remain ­formidable barriers. This emerged at last weekend’s workshop at the University of Venda in Thohoyandou, Limpopo, convened by the University of Johannesburg’s centre for education rights and transformation. The workshop formed part of the centre’s ongoing research and advocacy on the education rights of refugees, which is also supported by the Foundation for Human Rights.

George Vukor-Quarshie, Cornelius Hagenmeier and Annette Lansink, members of the University of Venda’s law school and its centre for rural development and poverty alleviation, presented the preliminary findings of their yet-to-be published research on refugee students at the two-day meeting.

“Students [whose asylum applications have been rejected] are arrested outside universities and deported,” said Hagenmeier, a senior lecturer and co-ordinator of the university’s international relations office.

Hagenmeier later told the Mail & Guardian that some students were deported when they were about to graduate. “At the moment we’re in the process of determining how widespread this is. We have concrete evidence of cases at the University of Johannesburg and here at the University of Venda.”

Vukor-Quarshie, head of the university’s department of ­jurisprudence, said: “Should a student in second year or third year, whose asylum application is ­negative, be deported or allowed to continue his studies?”

“You can’t be told in the middle [of your studies] that you can’t be there [at a university] anymore. We cannot have Africa’s young people sitting around while they can gain education,” he said. Universities, too, had a legitimate expectation that “when a student has been vetted and accepted” they would graduate, Vukor-Quarshie said.

Bertha Chikuvare recounted how her supervisor for her master’s degree at the University of Johannesburg came to her defence when a permit limitation sought to bar her from enrolling last year. Chikuvare, a Zimbabwean national who lives and works in Musina, Limpopo, told the M&G she learnt that she could not continue her studies after her ­asylum application was rejected on the grounds that her safety was not threatened in her country.

Because she had a work permit she did not face deportation, but without a study permit and refugee documents she could not register at the university. “My supervisor had to take it further with the faculty and they managed to allow me to finish.

“My case was somehow better [than for others]. Home affairs did not give out a deportation order for me because I had a work permit. But I can think of others, especially at the undergraduate level, facing the same scenario and not having work permits,” said Chikuvare.

At the time of the centre for ­education rights and transformation’s Gauteng workshop on refugee rights late last year, two University of Johannesburg immigrant students, one from Zimbabwe and the other from the Democratic Republic of Congo, faced deportation and were held at the Lindela Repatriation Centre.

A lack of funding for tertiary education remains an even greater barrier for many immigrants, the workshop heard. “Refugee children don’t even have access to South Africa’s national student financial aid scheme,” said Ivor Baatjes, senior researcher at the centre for education rights and transformation.

Abdinasir Aden Mohamed, a Somali refugee and representative of the Somali Association of South Africa, appealed to businesses and public institutions to consider ­refugees when allocating bursaries and study loans. Scores of Somalis living in the country were excluded from university study because of financial hardship, Mohamed said, although language barriers and the lack of required documentation were also major problems.

Acquiring education would augur well for Somalia’s economy when the long-standing civil war ends, Mohamed said. “In future, my country will be stable and we’ll go back home. That’s why we need to get education. But most Somalis can’t afford ­education here. Bursaries can help.”

The organisation had managed to enrol only one immigrant matriculant at a university, Montsho told the M&G. “We appeal to the relevant authorities that if it’s possible for them to offer bursaries or scholarships to immigrant children as well, they should do so. If immigrants are educated here they can, in future, help in the development of their countries.”

Michael Tshivule, a teacher at Musina High School, told the workshop about a “brilliant” Zimbabwean pupil who did well in matric four years ago. “But when I saw her she was lingering in the street” because she could not afford tertiary ­education, he said. Tshivule enrolled her at Techniven FET College “where she graduated last year and is now looking for a job. As individuals we can also help, when possible.”

Although access to tertiary education dominated discussions at the Thohoyandou workshop, barriers to enrolling at primary and secondary schools were widely discussed too. Of 85 boys residing in Save the Children’s shelters, only 38 are in school. Montsho said this was largely because many did not have the relevant documents and not because they did not want to go to school. Another problem was that local schools were usually overcrowded.

American academic Carol Anne Spreen spoke about the centre for education rights and ­transformation’s research she presented at the United Nations Human Rights Council in New York last year on the use of indicators for ­monitoring education rights for refugees. “Education rights of ­refugees and migrants are not just about access to schooling, they are also about what happens inside of the classroom,” she said.

The workshop also heard about persistent xenophobia and sporadic attacks on foreigners. Thabe Mogoboya, an attorney at Lawyers for Human Rights, said the government had to classify xenophobic attacks as hate crimes and create “special courts to deal with them”.

Addressing documentation ­bottlenecks that make it hard for children to enrol at schools, a ­recurring theme at this and previous workshops, Simon Ramabulana, a Limpopo home affairs official, said several workshops would be needed to sort it out.