What are we buying into? 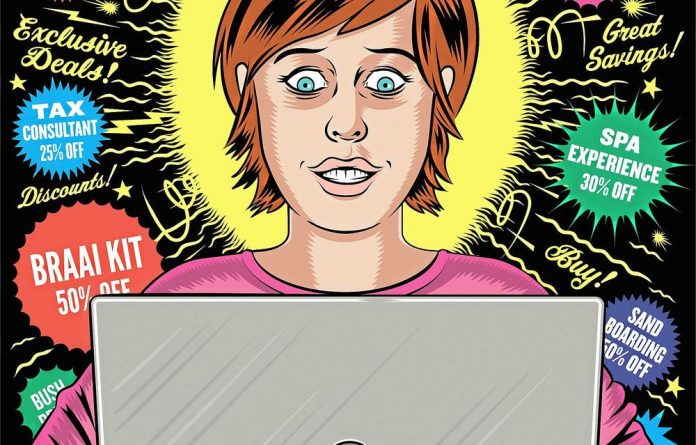 It usually starts off with a leg wax, or something equally practical. Maybe a facial — you have not had one in months and at your age and this price you really cannot afford not to “buy now”. It is not although you are purchasing it because of the 65% discount, or because you feel pressured by the digital clock counting down the minutes until the deal closes and you can finally count yourself among the 540 responsible consumers who paid R350 for a spa experience that would normally cost R700. Bargain!

Welcome to the world of online group buying where you never have to pay full price for anything ever again. Here is how it works: pick a group-buying website — Groupon, VuvuPlaza, CityMob, Daddy’s Deals, Wicount — then subscribe, view the deal on offer, purchase the coupon and wait for the deal to “tip”, which means enough people have purchased the deal to make it valid. It is social democracy at its online best.

Fancy a weekend in the bush at 50% off? How about a steak, a sand boarding experience or a tax consultant at a fraction of the advertised price? The daily deals are as inclusive as they are random, which is exactly what you will love about it. It is like a daily bucket list. Seasonal sales are just a gateway drug — this is where you can get a daily fix.

By 2am the first deals start rolling into your inbox, pimping their massive discounts and flaunting their glossy lifestyle images in that old-school, Peter Stuyvesant way.

I cannot remember how many of these social-buying websites to which I have subscribed. I used to think there was not a firewall strong enough to keep me from finding the best deals in town. But that was 10 coupons ago, about the same time I had my first bad experience. Let us just say that I thought a horse ride on the beach might actually involve an actual beach and not a few dunes at the end of a smallholding on the edgier side of the Cape Flats. I was half hoping a gun would go off just to scare our overworked horses into an extended trot. Clearly, the owner had overextended her limited resources — not the best marketing decision for her business, methinks.

That was the beginning of the end. Like a credit-card bill that forces you to account for your flaws and fetishes, my list of random coupons made me take stock of my bargain buys. I started wondering when I stopped purchasing practical items such as meal vouchers and started buying into the mass-discount mentality that regards impulse buying and rational thinking as two sides of the same consumer coin. Why else would a person think a skydiving experience for her boyfriend, who has verbalised his fear of heights, would make an excellent Valentine’s Day gift?

But then that is the point. You are not thinking with the left brain, even when you are clocking serious kilometres and billable hours just to save R200 on something in the East Rand.

Fascination with cheap and new extends to all generations
This fixation on cheap and new does not just happen to generation X experiential junkies like me. It happens to sane working folk like Johannesburg-based Megan Macgarry (28), a project co-ordinator who works for an international non-governmental organisation. She used to think it was about getting a better deal and now just thinks the better of it.

“I got marginally addicted to the whole ‘wow, it’s so cheap’ thing — this false belief that you’re getting a bargain,” Macgarry said. “At one stage I was buying a lot. Some were successful, innocent things like watches or meals out, but others, like a dentist’s teeth-cleaning session, not so much.
Needless to say, I hope I never see the Russian woman who scraped my gums away ever again.”

In 2010 Groupon became “the fastest-growing company in web history”, according to Forbes magazine. By the end of 2011 the company had gone public. It cannot be a coincidence that companies such as Groupon and its ilk have bucked the trend, growing in size and number during a worldwide recession.

David Reibstein, professor of marketing at Wharton University in Pennsylvania, agrees. “The reason some retailers might be willing to provide supply is because they have excess inventory,” Reibenstein told an interviewer in May last year. “As the economy picks up and there is less excess inventory, the availability of supply will go down. The willingness of the merchant to offer deep discounts will go down.”

But with the recession still in session, business is booming and you, the deal checker, only have to look at the large number of social-buying websites in South Africa (there are even sites that consolidate all the best deals such as Dealafrica and DealZone), a country not exactly known for its online buying culture, to realise that big discounts equal big business. For some.

Unlike what is billed to the consumer, most participating businesses do not seem to get the “best deal in town”. Many will tell you that marketing was the reason they were willing to take on such huge losses because, in the end, the business owner has to be willing to take a risk.

The owner usually gets a 50% cut of the discounted price, which works out to about 25% or less of the normal selling price. That means that, where the consumer gets a R200 haircut for R100, the salon only makes R50. The owner chooses how long the deal will run but the website sets the discount, which can be anywhere between 50% and 80% off the original price. And the trend in these competitive times is definitely towards offering bigger discounts and more deals.

Redeeming and claiming coupons
There is also the matter of how many consumers actually claim their coupons. My local yoga studio, the Gururamdas Kundalini Yoga studio in Cape Town, sold 108 coupons through CityMob, but less than 60 people redeemed their coupons within the three-month period.

“I was surprised by how few people used their coupons. It is strange that people will complain about paying R90 for a single yoga class, but think nothing of throwing away R99 on a coupon for a full month of yoga,” said studio owner Ilana Fintz.

Unlike its competitors, CityMob pays out for every coupon sold and not just for the ones used. Normally unredeemed coupons result in 100% profit for the website, a practice known as “breakage” in the industry, leaving the owner completely out of the deal.

Whether these deals are an effective marketing exercise is debatable. Businesses find themselves overstretched or turning away regular customers during the crazy discount period.

Besides, not that many of the discount customers bring repeat business. Most bargain hunters are known to chase the deal, not the service, which is exactly what these websites enable and encourage them to do.

Customer loyalty is just one of the many questions being raised. Quality control is another. The Guardian reported in November last year that Groupon China had to kowtow to the idea that it might have some quality control issues after it was found to be linked to a company selling counterfeit luxury watches.

Is this the death rattle sounding the end of days for the daily deal phenomenon? Has it gone too far, pushing businesses to the point where they no longer value their time or service quality? Encouraging consumers to believe that everything is negotiable, even their loyalty?

Technology writer Dan Frommer sees a different future for the industry. In September last year he wrote on a Silicon Valley-based news website, Business Insider, that he believed the industry would not actually die, but would evolve into a more refined, user-friendly version of itself.

“The future of group buying is on mobile devices,” he wrote. “Instead of paying today for a deal that you might use tomorrow or next month (or never), you can pay right now for a deal that you will use right now. This is more immediate satisfaction and can be a better advertising and lead-generation service for merchants too. If a restaurant has empty tables or if a hotel has empty rooms, it can fill them quickly. (And on a busy Friday night, it does not have to worry about cheapskates coming in with 50%-off coupons.)”

Like Facebook, I still visit these websites on occasion, only to regret later the anxiety that comes with feeling as though I missed out on something potentially life-changing.

Occasionally, I still buy deals, but not before I take myself through some rational questions first. Would I buy it if it was not discounted? Do I need it or just want it?

As for Macgarry, it may have taken her a “romantic” weekend retreat next to a platinum mine and an electro-charged acupuncture session to shock her back to reality, but she says her inbox is now free of daily deals — and she plans to keep it exactly that way.