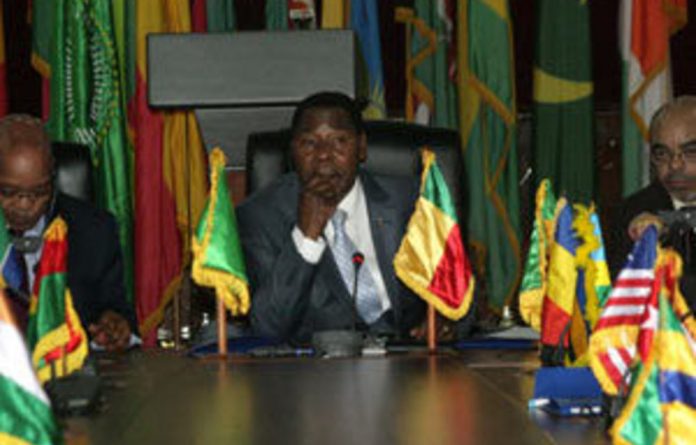 African leaders on Saturday began talks on insecurity in the Sahel region, where fresh violence in Mali has sparked what rights groups say is the area’s worst human rights crisis in 20 years.

As many as 25 government leaders were expected for the meeting, but more than a dozen, including the host, were present at the start of closed door talks in the small West African country of Benin.

It was the first Africa Union (AU) meeting convened by Benin’s President Thomas Boni Yayi, who took over the helm of the continental body last month.

“Africa is truly the continent of the future, of hope and expectations, but the great paradox is that our continent is not united in its march towards peace, stability, security, progress, prosperity and development,” said Yayi.

He bemoaned the “persistence of crises and the emergence of new threats to the security … such as endemic and persistent insecurity in the Sahel region.”

Special panel
Yayi also spoke of the upsurge in terrorism and narcotics trafficking in parts of continent, piracy in the Gulf of Guinea and off the Somali coast.

West African waters have seen a spike in piracy in recent months.

The leaders had been expected to discuss a dispute over the AU commission’s top post, after former South African foreign minister Nkosazana Dlamini-Zuma challenged Ping at a summit in January.

The 54-member AU was deadlocked and temporarily extended Ping’s term, but the contest exposed divides between geographical regions and French- and English-speaking Africa.

In his opening remarks at the talks in Benin’s commercial capital of Cotonou, Boni Yayi said a special panel had been set up to deal with that issue.

‘Worst human rights crisis’
“A committee of eight members drawn from the five regions of the continent supported by Gabon, South Africa and the African Union president”, will review the still-contested post, Boni Yani said.

But, he added, the subject “will not be a part” of the Saturday talks.

Amnesty International has said that a Tuareg offensive raging in northern Mali has sparked “the worst human rights crisis” in the area in 20 years.

Scores have been killed and thousands have fled into neighbouring countries since the rebels launched their offensive last month.

The International Committee of the Red Cross (ICRC) said on Friday that fighting had displaced at least 60 000 people inside Mali.

‘Deep concern’
More than 44 000 others had fled to neighbouring Burkina Faso, Mauritania and Niger, according to the UN refugee agency.

Tuareg rebels, boosted by the return of those who had been fighting for Muammar Gaddafi in Libya, launched an offensive on January 17 and have attacked several northern towns as they demand autonomy for their nomadic desert tribe.

The Economic Community of West African States (Ecowas) on Friday voiced “deep concern” at the deteriorating security and humanitarian situation in the Sahel region that stretches across Africa south of the Sahara.