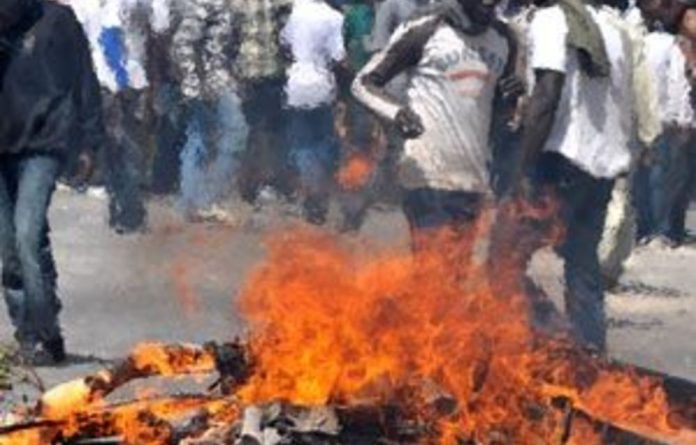 Senegalese riot police fired volleys of tear gas and rubber bullets at stone-throwing demonstrators after prayers at a mosque in Dakar on Sunday, in fresh violence a week before presidential elections.

Rescue workers took away one man who was unconscious after being hit by a rubber bullet, an Agence France-Presse journalist witnessed.

It was the latest violence in days of urban clashes between police and protesters trying to defy a ban and hold demonstrations against 85-year-old President Abdoulaye Wade’s plan to run for a third term in office.

Sunday’s clashes erupted outside a mosque, which demonstrators said had been “profaned” when it was hit by tear gas grenades thrown by a police officer on Friday.

Hundreds of angry protesters engaged in a tense, hours-long stand-off with riot police, throwing rocks as police fired tear gas and rubber bullets. Others set a massive fire using material grabbed from a nearby construction site and tables from market stalls.

Police began throwing rocks in return and at one point a Molotov cocktail flew through the air, hitting a police truck and causing a brief fire.

‘A house of God’
Cars were smashed and large rocks covered Avenue Lamine Gueye, where coffee shops, bakeries and shoe stores closed up shop and apartment residents looked on. Some protesters ripped boards off the windows of a boarded-up coffee shop to use as shields against police.

“A mosque is a house of God!” exclaimed shopowner Mansour Dieng, as he looked on. “Wade has to go, it is the only solution for this country. We are tired.”

“Really, this isn’t right. You don’t do that at a mosque,” said security guard Cheikh Gueye, leaning on his bicycle, unable to get to work.

Sunday’s gathering of the influential Tidiane brotherhood began peacefully, with the group reciting verses from the Qur’an and praying.

But it degenerated into violence as the crowd reacted to a rumour that a personality who was not named, but who was described as someone close to power, had arrived, witnesses said.

Leaders of the opposition coalition M23 joined in the fellowship’s gathering, which was also attended by singer Youssou Ndour, whose presidential candidacy was rejected by the Constitutional Council.

‘Grand Projects’
Despite having served two terms in office, a limit he himself introduced, Wade says additional changes to the Constitution in 2008 mean he can serve two more mandates, giving him more time to finish his Grand Projects.

The country’s highest legal body, the Constitutional Council, approved his candidacy on January 27, sparking riots in the capital and elsewhere that have already claimed five lives.

In the run-up to elections, Wade has swept across the country promising universities, roads, airports and massive agricultural projects to win over five million registered voters.

The 13 opposition contenders, which include three of Wade’s former prime ministers, have failed to find a consensus candidate before the campaign.

About 23 000 soldiers and paramilitary police had already begun voting on Saturday, with polls continuing into Sunday.

The African Union said it was sending a team of observers led by former Nigerian president Olusegun Obasanjo to Senegal to monitor the February 26 elections.

Some members of the 40-strong team have arrived on Saturday, with Obasanjo due to arrive in Dakar Tuesday, said the AU in a statement. — AFP