Now’s not a good time to bomb Iran, US tells Israel 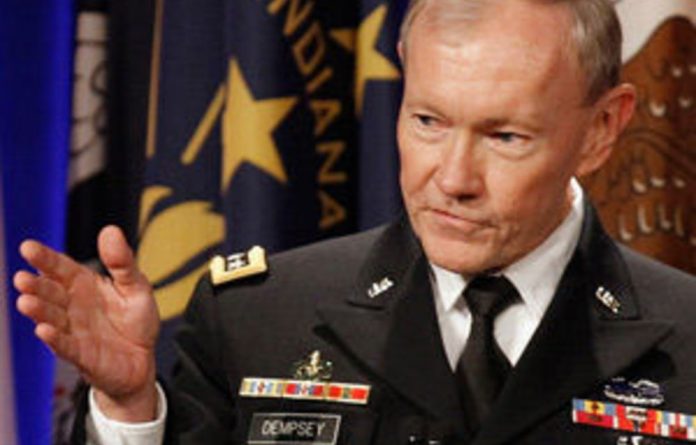 The United States is stepping up efforts to dissuade Israel from attacking Iran’s nuclear facilities, with a strong public warning by the US military’s most senior figure and the dispatch of two high-ranking officials to Jerusalem.

General Martin Dempsey, who chairs the US joint chiefs of staff, said in a television interview that it was “not prudent at this point” to attack Iran, and “a strike at this time would be destabilising”.

But in a comment likely to fuel speculation about Israel’s military plans, he added: “I wouldn’t suggest we’ve persuaded them that our view is the correct view.” The two countries were having a “candid, collaborative conversation” which was continuing, he said.

His concerns were echoed by William Hague, the British foreign secretary, who said it was “not a wise thing at this moment” for Israel to launch military action against Iran.

‘Negotiate with Iran’
Reiterating comments made in a newspaper interview, Hague told the BBC’s Andrew Marr Show on Sunday: “I think Israel, like everybody else in the world, should be giving a real chance to the approach that we have adopted, of very serious economic sanctions and diplomatic pressure, and the readiness to negotiate with Iran.”

On Sunday Iran’s oil ministry announced it had stopped selling crude oil to British and French companies, in apparent retaliation for EU sanctions imposed over Iran’s perceived nuclear ambitions, including an oil embargo set to begin in July.

A spokesman, Alireza Nikzad, was quoted on the Iranian oil ministry’s website as saying: “Exporting crude to British and French companies has been stopped — we will sell our oil to new customers. We have our own customers — The replacements for these companies have been considered by Iran.”

Iran had warned last week that it might cut oil supplies to the Netherlands, Greece, France, Portugal, Spain and Italy.

Monitors return
Officials from the IAEA, the UN nuclear watchdog, were due in Tehran on Monday for another round of talks on Iran’s nuclear activities, after they were denied access to certain nuclear sites and scientists on a visit last month.

Dempsey acknowledged Israel’s sense of urgency that action was needed before Tehran moved its nuclear facilities beyond reach, deep underground. Israel’s defence minister, Ehud Barak, who is believed to favour an early military strike, has termed this the “zone of immunity”.

Dempsey, who visited Israel last month to deliver a message of restraint, said it was premature to “decide that the time for a military option was upon us”. Economic sanctions imposed by the international community and diplomacy were beginning to have an effect.

Asked by the CNN interviewer Fareed Zakaria whether he would bet on Israel not launching an attack, Dempsey replied: “Fortunately I’m not a betting man.”

‘Propaganda warfare’
In Tehran, the Iranian foreign minister, Ali Akbar Salehi, dismissed western “propaganda warfare” and said Iran would continue with its nuclear programme “even in the worst-case scenario”.

“Since we believe that we are right, we do not have the slightest doubt in the pursuit of our nuclear programme,” he told reporters, according to Press TV. “Therefore, we plan to move ahead with vigour and confidence and we do not take much heed of [the West’s] propaganda warfare — Even in the worst-case scenario, we remain prepared.”

As part of the US’s continuing efforts to restrain Israel, Barack Obama’s national security adviser, Tom Donilon, was due to meet Binyamin Netanyahu on Sunday, as well as a clutch of senior government, military and intelligence figures during his two-day visit to Israel.

The purpose of the visit was consultations “about a range of issues, including Iran, Syria, and other regional security issues,” the White House said.

Later this week the US director of national intelligence, James Clapper, will arrive for talks with Netanyahu, Barak and the chief of Israel’s intelligence agency.

Sanctions unlikely to deter Iran
Both Americans are expected to impress on their interlocutors the need to give time for sanctions against Iran to have an impact. But, as the Guardian reported last week, there is a strong current of opinion within the administration that sanctions are unlikely to deter Iran and that their main purpose is to delay an Israeli strike.

Diplomatic traffic between Washington and Jerusalem has increased over recent weeks as Israel has agitated for tougher action against Iran, and the US has intensified efforts to persuade Israel against a military strike. As well as a string of US officials travelling to Israel, visitors to Washington have included Barak, Avigdor Lieberman, the foreign minister, and Tamir Pardo, the Mossad chief.

Netanyahu is scheduled to visit the US next month to attend the annual conference of the pro-Israel lobby group Aipac. He is expected to meet Obama while in Washington. —