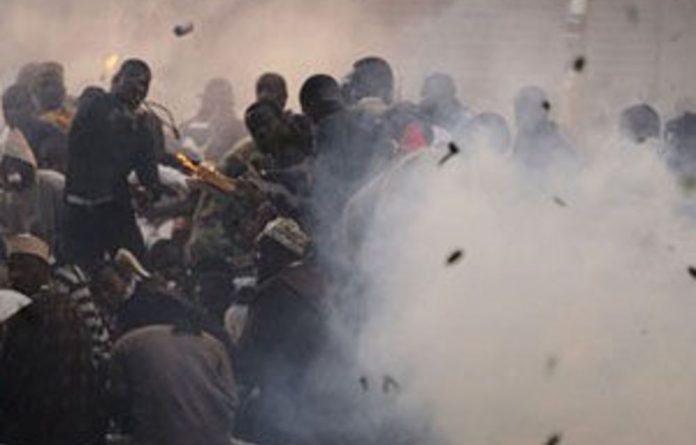 Protesters demanding the departure of Senegal’s aging president on Sunday seized control of a three-block stretch in the heart of the capital, erecting barricades and lobbing rocks at police as demonstrations intensified just days before a contentious presidential poll.

It marked the fifth day of violent protests ahead of the country’s crucial vote, and on Sunday the state-owned news service confirmed the death of a young man in a suburb of the capital where the demonstrations later spread. President Abdoulaye Wade (85) is insisting on running again, despite the deepening unrest and calls from both France and the United States to hand power to the next generation.

Sunday’s clashes marked a worrying development, because they took on a religious dimension in the normally tolerant Muslim nation. Hundreds had gathered outside a mosque as religious leaders met to discuss a Friday incident in which police used grenade launchers to throw tear gas down the wide boulevard, at one point hitting the wall of the mosque.

Footage of the incident shown on Senegalese TV indicated that the police had not shot inside the mosque, only outside where a crowd had gathered. But the cloud of gas enveloped worshippers praying both inside and outside the shrine, deeply offending Senegal’s largest Muslim brotherhood which owns the mosque.

On Sunday morning as the crowd outside the mosque grew larger, a truck of riot police took a defensive position at one end of Lamine Gueye Boulevard, and the dozens of youths erupted in jeers. They then began grabbing cinderblocks from a nearby construction site, smashing them on the pavement in order to make smaller projectiles which they hurled at police. Security forces responded with waves of tear gas.

They sparred for several hours until the protesters succeeded in seizing control of a three-block stretch of Lamine Gueye, one of two main commercial avenues traversing downtown Dakar. They grabbed market tables and pieces of plywood that had been nailed across shop windows, using them as shields to protect themselves from the tear gas grenades.

They then lined them across the road’s median, as police were momentarily pushed back, waiting for reinforcements.

Worry
Each time the youths charged the police, they screamed, “Allah Akbar” and “There is no God but Allah”; religious phrases that are rarely heard in his this nation that is over 90% Muslim but which has long embraced a secular identity.

“I’m worried — yes. What I’m seeing here could really degenerate into another kind of situation, a religious one,” said Moustapha Faye, a young member of the Mouride Muslim brotherhood, the second largest in Senegal, as he stood behind the police line watching the confrontation. “We must absolutely avoid violence.”

Later on Sunday, Interior Minister Ousmane Ngom apologised to the population, calling Friday’s attack on the mosque a “police blunder”. On state TV, he asked for forgiveness from the Tidiane community and all Muslims, and called on the politicians to not exploit this incident for political ends.

The protests spread from the downtown core of the capital to numerous neighbourhoods including HLM, Parcelles, Castor and Rufisque. In Rufisque, an adolescent was killed in the clashes on Sunday, while on Saturday, a demonstrator was killed in the regional capital of Kaolack, bringing to six the number of people killed in three weeks of protests, according to the Senegalese Press Agency, the state-owned news service.

The increasingly tense atmosphere on the ground has many concerned that there may be worse unrest if Wade is declared the winner of next Sunday’s vote. In power for 12 years, Wade oversaw a 2001 revision to the Constitution which imposed a two-term maximum, a move that at the time was hailed as proof of Senegal’s democratic maturity. He disappointed many when he argued that the new Constitution was not retroactive and so should not apply to him.

‘A light breeze’
Senegal has seen protests every few days since January, when the country’s highest court ruled that Wade was eligible to run for a third term. Wade has been dismissive of the opposition, characterising their protests as nothing more than a “light breeze which rustles the leaves of a tree, but never becomes a hurricane”.

The country is considered key to the stability of West Africa. It’s the only nation in the region and one of the only in Africa that has never experienced a military coup.

While most African countries began experimenting with democracy post-independence in the 1960s, Senegal’s democratic traditions date to at least the mid-1800s, when citizens in the former French colony were given the right to elect a deputy to the French Parliament. Among them was Lamine Gueye, whose name now graces the boulevard where the youths sparred with police and who served as a senator in France in the 1950s. — Sapa-AP

Africa: On a human rights mission