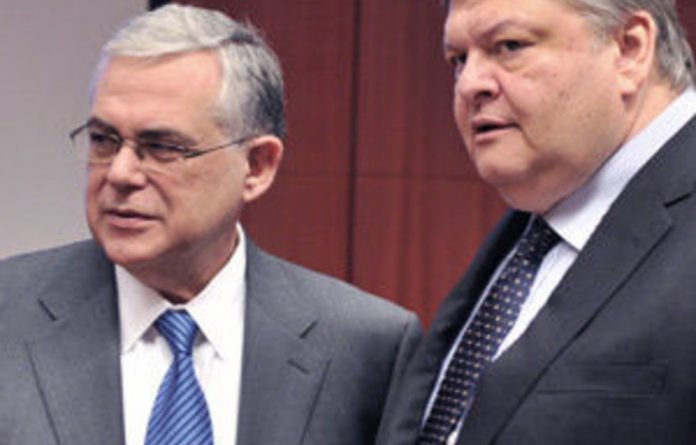 Eurozone finance ministers have sealed a second bailout for debt-laden Greece that will resolve its immediate financing needs but seems unlikely to revive the nation’s shattered economy.

After a marathon 13 hours of talks, eurozone officials on Tuesday morning said ministers had nailed measures to cut Greece’s debt to around 121% of gross domestic product by 2020, close to their original target of 120, after negotiators for private bondholders offered to accept a bigger loss to help plug the funding gap.

Agreement on a €130-billion rescue package with strict conditions attached will help draw a line under months of uncertainty that has shaken the currency bloc, and avert an imminent Greek bankruptcy.

“The financial volume (of the Greek package) is €130-billion and debt-to-GDP (will be) 121%. Now it’s down to work on the statement,” one official involved in the negotiations told Reuters. Another confirmed the two figures.

The euro jumped almost half a cent, reversing earlier losses, after Reuters reported a deal had been struck.

A report prepared for ministers by EU, European Central Bank and IMF experts, obtained exclusively by Reuters, said Greece would need extra relief to cut its debts near to the official debt target 2020 given the ever-worsening state of its economy.

Accident-prone
If Athens did not follow through on economic reforms and savings, its debt could hit 160% by that date.

“Given the risks, the Greek program may thus remain accident-prone, with questions about sustainability hanging over it,” the 9-page confidential report said, highlighting the fact that Greece’s problems are far from over.

The accord will enable Athens to launch a bond swap with private investors to help reduce and restructure its vast debts, put it on a more stable financial footing and keep it inside the 17-country eurozone.

Around €100-billion in debt will be written off as banks and insurers swap bonds they hold for longer-dated securities that pay a lower coupon.

Private sector holders of Greek debt are expected to take losses of 53.5% or more on the nominal value of their bonds. Previously they had agreed to a 50% nominal writedown, which equated to around a 70% loss on the net present value of the bonds.

Passing up profit
The debt sustainability report delivered to ministers last week showed that without further measures Greek debt would only fall to 129% by 2020.

The IMF had said if the ratio was not cut to near 120%, it may not have been able to help finance the bailout, putting the whole scheme in jeopardy.

To help fill the financing gap, one senior eurozone source said the ECB would pass up profits it has made from buying Greek bonds over the past two years under its emergency bond-buying programme.

The ECB has spent about €38-billion on Greek government debt that is now worth about €50-billion. By forgoing that profit and redistributing it to national eurozone central banks, the ECB can indirectly provide debt relief to Athens.

Whatever its constituent parts, economists say the deal may only delay a deeper default by a few months. A turnaround could take as much as a decade, a prospect that brought thousands of Greeks onto the streets to protest against austerity measures on Sunday.

Doubts over commitment
Sceptics question whether a new Greek government will stick to the deeply unpopular programme after elections due in April, and believe Athens could again fall behind in implementation, prompting exasperated lenders to pull the plug once the eurozone has stronger financial firewalls in place.

While there are doubts in Germany and other countries that Greece will be able to meet its commitments, including implementing €3.3-billion of spending cuts and tax increases, the threat of contagion from a chaotic Greek default always made a deal more likely than not, no matter how tortuous the negotiations.

The private creditor bond exchange is expected to launch on March 8 and complete three days later, Athens said on Saturday. That means a €14.5-billion bond repayment due on March 20 would be restructured, allowing Greece to avoid default.

The vast majority of the funds in the €130-billion programme will be used to finance the bond swap and ensure Greece’s banking system remains stable: €30-billion will go to “sweeteners” to get the private sector to sign up to the swap, €23-billion will go to recapitalise Greek banks.

Little direct help
A further €35-billion will allow Greece to finance the buying back of the bonds, and €5.7-billion will go to paying off the interest accrued on the bonds being traded in. Next to nothing will go directly to help the Greek economy.

Those numbers could change in the final analysis given the scramble to meet the overall objective of reducing Greece’s debts from 160% of GDP to around 120 by 2020.

The deal will provide immediate relief to Athens and financial markets but no one is pretending it will end Greece’s problems. Figures last week showed its economy shrank 7% year-on-year in the last quarter of 2011, much more than expected, with further cuts likely to make matters worse.

The troika of European Commission, ECB and IMF, responsible for monitoring Greece’s reform progress, carries out quarterly reviews and could decide Athens is not meeting its commitments at any one of them. — Reuters