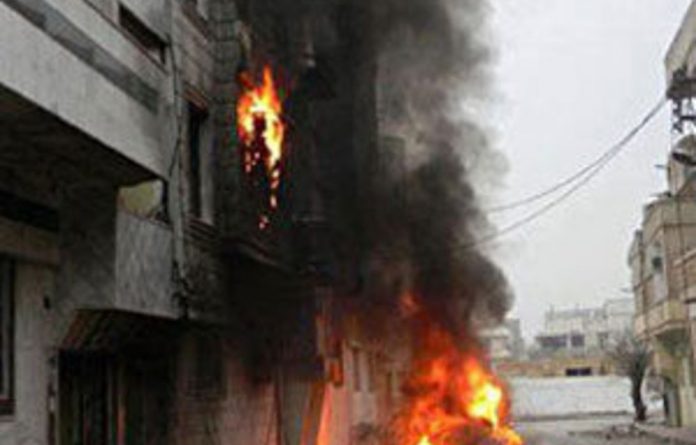 The deaths of veteran journalist Marie Colvin and French photographer Remi Ochlik, and the rising toll of civilian dead in Syria, have prompted renewed calls for an end to the regime of Bashar al-Assad.

The journalists’ deaths came on a day in which, according to activists, more than 80 people were killed in the besieged district of Bab al-Amr in the city of Homs, which has been under daily attack by the Syrian army for the past three weeks.

Syria: A nation at war with itself

The Syrian uprising has become increasingly violent and reports of human rights abuses are rife, as protesters continue to rally for the resignation of President Bashar al-Assad. We take a look at the current situation and how it has developed over the course of the past year.

The French president, Nicolas Sarkozy, described the deaths of the two journalists as an assassination, and said that the Assad era had to end.

“That’s enough now,” Sarkozy said. “This regime must go and there is no reason that Syrians don’t have the right to live their lives and choose their destiny freely. If journalists were not there, the massacres would be a lot worse.”

The British foreign secretary William Hague described the deaths as “a terrible reminder of the suffering of the Syrian people — scores of whom are dying every day”.

‘Redouble our efforts’
“Marie and Remi died bringing us the truth about what is happening to the people of Homs,” Hague said. “Governments around the world have the responsibility to act upon that truth — and to redouble our efforts to stop the Assad regime’s despicable campaign of terror in Syria.”

David Cameron paid tribute to Colvin, telling the House of Commons that the death of the “talented and respected foreign correspondent” was “a desperately sad reminder of the risks journalists take to inform the world of what is happening and the dreadful events in Syria”.

Colvin and Ochlik were killed in Homs after an artillery shell hit the house in which they were staying.

Three other foreign reporters, as well as seven activists from Bab al-Amr, were also wounded on Wednesday. One of the injured is freelance photographer Paul Conroy, who was travelling with Colvin.

Edith Bouvier, a freelance journalist working for the French paper Le Figaro, suffered serious injuries to her leg in the attack, and activists warned that she was at risk of bleeding to death.

Was Syria deliberately targeting journalists?
Jean-Pierre Perrin, senior foreign correspondent at the French daily Libération, said he had been with Colvin and other journalists at a makeshift press centre in Homs and had left with her several days ago after being warned that the Syrian army were preparing a major offensive and that journalists could be targeted. Colvin waited, decided the offensive against the press centre had not happened, so returned to Homs a few days later.

He said the reporters had discussed concerns about Syrian army deliberately targeting journalists.

Perrin told Liberation that the press centre, which had a generator and a patchy internet connection, was the only means of informing the outside world of what was happening in the city. “If the press centre were destroyed, there would be no more information out of Homs.”

Perrin said the Syrian army recommended “killing any journalist that stepped on Syrian soil”. He said the journalists had been aware of this, and of reports of intercepted communications between Syrian officers that recommended killing all journalists found between the Libyan border and Homs, and making out they had been killed in combat between terrorist groups.

He said of his departure from Homs with Colvin: “We had been advised to leave the town [of Homs] urgently, we were told ‘If they find you, they will kill you.’ So I left with the Sunday Times journalist [Marie Colvin], but later she wanted to go back when she saw the offensive hadn’t happened.”

Videos of killing and destruction
In the deadliest period for the media since the uprising in Syria began, at least three citizen journalists have also been killed in recent days, in an apparent attempt by the regime to prevent news emerging from Homs. The three Syrians had all played prominent roles in chronicling the army’s assault on Homs. One of those killed was the video blogger Rami al-Sayed, also known as Syria Pioneer, who had uploaded to the internet at least 200 videos of killing and destruction in his neighbourhood.

Colvin, a decorated foreign correspondent with more than 30 years of experience in conflict zones, and Ochlik, who last month won a World Press Photo award, died instantly when the shell struck the safe house that had been provided for them by local activists just after 9am. Colvin’s body, along with Ochlik’s, was recovered from the rubble just after 1pm.

Colvin’s editor at the UK’s Sunday Times, John Witherow, released a statement that said: “Marie was an extraordinary figure in the life of the Sunday Times, driven by a passion to cover wars in the belief that what she did mattered. She believed profoundly that reporting could curtail the excesses of brutal regimes and make the international community take notice. Above all, as we saw in her powerful report last weekend, her thoughts were with the victims of violence.

“Throughout her long career she took risks to fulfil this goal, including being badly injured in Sri Lanka. Nothing seemed to deter her. But she was much more than a war reporter. She was a woman with a tremendous joie de vivre, full of humour and mischief and surrounded by a large circle of friends, all of whom feared the consequences of her bravery.”

Colvin and Ochlik had been in Bab al-Amr for the past week reporting on the bloody siege of opposition-held parts of Syria’s third city, which has claimed hundreds of lives and led to a humanitarian crisis.

The house in which the reporters were based was located next to a hospital and had been the main refuge for all reporters who had made it to Bab al-Amr in the face of a relentless barrage by regime forces.

An activist for the campaigning group Avaaz who witnessed Wednesday’s attack said: “I left the house after it got struck and headed to a house across the street. The shelling continues and the bodies of the journalists are still on the ground. We can’t get them out because of the intensity of the shelling even though we’re only a few metres away from them.”

Another witness said rockets were continuing to rain down on the area as the wounded tried to escape the bombed house. A graphic video posted on the internet showed the two-storey house in ruins — a scale of damage that could only be caused by a heavy artillery round. Two bodies were visible in the rubble.

Three of the wounded are understood to be in a serious condition and in urgent need of treatment.

They face a long and perilous drive to the Lebanese border where Red Cross officials are preparing to meet them.

The foreign editor of the Times, Richard Beeston, released a short statement on Twitter that read: “Terrible news about Marie Colvin. First worked with her Beirut 85. Most courageous, glamorous foreign corr I have ever met. Tragic loss.”

Colvin used a web forum to make what is believed to be her last post on Tuesday. “I think the reports of my survival may be exaggerated,” she wrote. “In Baba Amr. Sickening, cannot understand how the world can stand by and I should be hardened by now. Watched a baby die today. Shrapnel, doctors could do nothing. His little tummy just heaved and heaved until he stopped. Feeling helpless. As well as cold! Will keep trying to get out the information.”

On Tuesday night, Sayed also lodged a final missive. “Baba Amr is being exterminated. Do not tell me our hearts are with you because I know that. We need campaigns everywhere across the world and inside the country. People should protest in front of embassies and everywhere. Because in hours, there will be no more Baba Amr. And I expect this message to be my last.” —