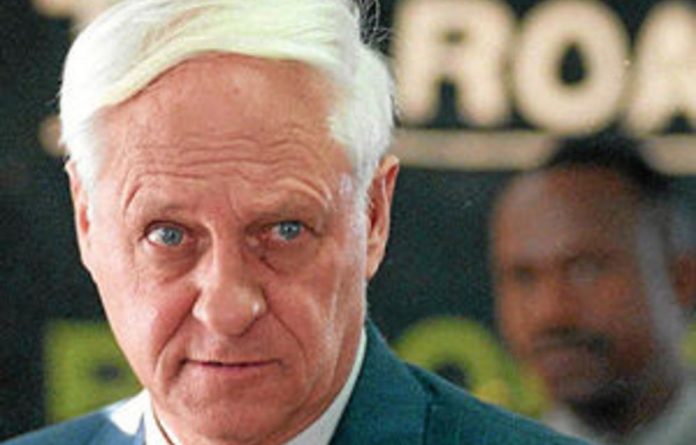 In some circles, the kind where everyone is white, speaks Afrikaans and owns a farm, there is no real debate about who the biggest volksverraaier (traitor of the people) was.

Sure, there is a perfunctory argument to be made for Pieter Mulder, the leader of the last political party standing that has any semblance of representing such white, Afrikaans farmers, because he accepted a Cabinet position in a government firmly controlled by the ANC. You could, perhaps, make cursory reference to Marthinus van Schalkwyk for abandoning the last vestiges of the once-powerful National Party by merging it with that self-same ANC.

But in the final analysis it really comes down to a tie between FW de Klerk and Constand Viljoen. One or the other is responsible for the sad state in which white Afrikaner nationalism, the flavour with racial ideology at its core, finds itself. Because, in these circles, the sharp decline since the early 1990s in support for the cause can indicate only that it was stabbed in the back.
De Klerk tends to be the villain for those who are more politically minded and regard the referendum on opening negotiations with the ANC, over which he presided, as leading unthinking white people to their doom.

The more militant, those associated with what remains of the Afrikaner Weerstandsbeweging, tend to favour Viljoen. He was, after all, the man who chose not to launch a white-versus-black civil war, that they think would have been a glorious affair and one which those of a peculiar religious bent believe would have ended in white victory.

In formal history Viljoen is credited both with convincing the military leaders of South Africa to bow to civilian authority and accept the transition from apartheid and for bringing white Afrikaner hopes and ambitions into the subsequent political process as co-founder of what is now the Freedom Front Plus.

For the far right, however, he was the general with a trained and determined force of perhaps 50000 men or more ready to take the battle to Umkhonto weSizwe and retake South Africa.
He was the soldier’s soldier, the deeply respected frontline leader who could have sparked the resistance but chose negotiation instead.

After that treachery, in this world view, the fight just went right out of white Afrikaners, allowing them to be slowly whittled away through crime and emigration in a process that will culminate in a South Africa free of whites.

But this ignores some rather interesting, if more nuanced, features along the road that has led to the far right as the fringe of the fringe: the failure of proto-homeland Orania to become a mecca of white capital and skill; the revulsion triggered among even moderately moderate whites by the AWB and the lack of any other organisation to challenge it; the grand mistake made by those who decided to withdraw from politics entirely rather than engage in a minority fight; and the failure, mostly because of internal divisions, to make political hay out of the death of AWB leader Eugene Terre’blanche.

Perhaps the real history of the far right in South Africa cannot be written until it is truly dead, rather than just in terminal care.

When it comes time to write the beginning of the end, however, that chapter will have to start at a point at least a decade and a half before 2012.