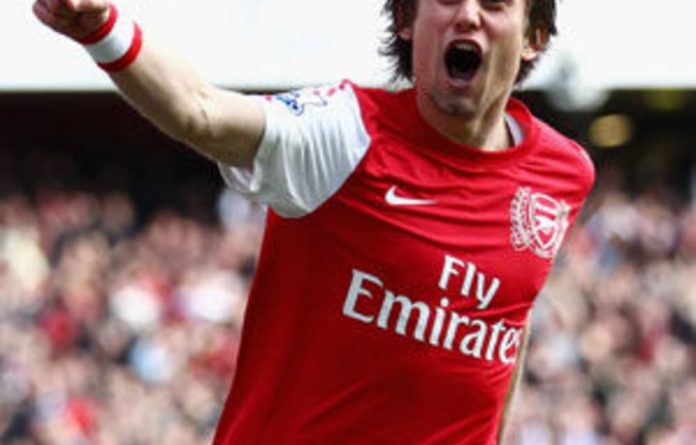 Theo Walcott struck twice as Arsenal staged a remarkable comeback to beat north London rivals Tottenham Hotspur 5-2 and reclaim a place in the top four while delivering a huge blow to their near neighbours’ fast fading title hopes.

Trailing to an early Louis Saha goal and an Emmanuel Adebayor penalty, Arsenal appeared to be heading for a third successive defeat.

But the home side responded superbly, drawing back level thanks to goals from Bacary Sagna and Robin Van Persie immediately before the break before Tomas Rosicky and Walcott secured victory in the second half.

The victory provided a welcome boost to Arsenal and their under-fire manager Arsene Wenger following the FA Cup exit at the hands of Sunderland and the humiliating 4-0 Champions League defeat to AC Milan.

Three points allowed them to leapfrog Chelsea and close the gap on third-placed Spurs to seven points who missed out on the chance to reduce the ten-point deficit on Premier League leaders Manchester City.

The stakes were undeniably high for Wenger’s side whose last realistic chance of success this season lies in holding onto a top four spot and claiming a place in next season’s Champions League.

Yet even that was insufficient to inspire a convincing defensive display and Arsenal’s porous backline was exposed after just four minutes when Adebayor and Saha combined to give Tottenham the lead.

Deflected shot
Adebayor — who scored eight goals in nine appearances in this fixture when he was an Arsenal player — spotted his team-mate running into the yawning gap in the heart of the Gunners defence and Saha sent a deflected shot past Wojciech Szczesny.

That set the tone for the opening 20 minutes with Wenger’s side appearing utterly disorganised while Spurs were clearly brimming with confidence.

Slowly though, the home side began to get a foothold in the game with van Persie sending a right foot shot narrowly wide before Rosicky forced a fine save from Brad Friedel with a near post header.

Despite those efforts, the momentum remained with the visitors who should have added a second when Kyle Walker fired into the side netting after Saha and Adebayor had again combined effectively.

However, that miss merely delayed the inevitable and Spurs eventually doubled their lead in the 32nd minute when Gareth Bale won a controversial penalty.

The Wales winger was released by a superb ball from Luka Modric and raced into the box before going down under a challenge from Szczesny.

Television replays suggested there had been no contact but referee Mike Dean pointed to the spot and Adebayor struck the ball inside the keeper’s left hand post.

This time there was no repeat of the grandstanding celebration that had infuriated Arsenal supporters when the Togo international scored against his former club while playing for Manchester City — although he couldn’t resist a quick jig in front of the home fans.

Arsenal had much bigger things to concern themselves than a celebration and at that point there appeared to be no way back for Wenger’s team.

But they responded positively, increasing the pressure on Friedel’s goal before taking advantage of some poor Tottenham defending to begin the comeback with Sagna’s 40th minute header.

That lifted the atmosphere around the Emirates Stadium and three minutes later they were back on level terms when the superb van Persie twisted and turned on the edge of the area before producing a finish of the utmost quality.

The match had been transformed with Tottenham ending the first half in the same state of disarray that had characterised Arsenal’s early efforts.

Redknapp made two substitutions at half time, withdrawing Saha and Niko Kranjcar and switching formation to accommodate Rafael van der Vaart and Sandro.

The changes had little effect and Arsenal carried on where they had left off when Rosicky turned home Sagna’s right wing cross to put Arsenal ahead in the 50th minute.

It was Arsenal now who were brimming with a self-belief that was epitomised by Walcott’s emergence after a torrid first half when he received unending stick from his own supporters.

The England winger found more and more space on the right and produced an excellent chipped finish to make it 4-2 after Van Persie had created the 65th minute opening by holding off Tottenham centre backs Younes Kaboul and Ledley King.

Then three minutes later Walcott again got in behind King to collect Sagna’s through ball before making it five. — AFP

Mourinho: ‘Special one’ or ‘surly one?’

Foxes building on a miracle

Almost four years on, Leicester City is one of the big teams and looking better than ever
Read more
Sport

Are the EPL standings lying to us?

Perhaps not. But it’s scary to think about just how deserving every team is of their current position
Read more
Sport

The absurdity of Premier nitpicking

Norwich won’t back down