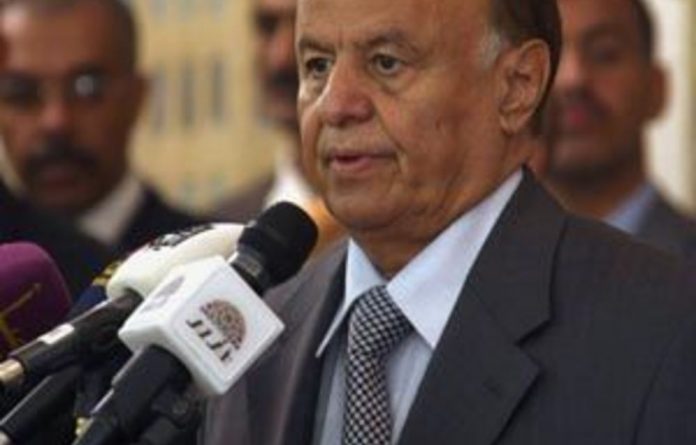 Yemen’s new president was inaugurated on Monday, saying the impoverished Arab state faced a “complex and difficult phase” as his predecessor stood down after 33 years in power.

Abd-Rabbu Mansour Hadi took office after elections last week in which he was the sole candidate to replace longtime ruler Ali Abdullah Saleh.

“We stand before a complex and difficult phase,” Hadi said at his inauguration, standing beside Saleh, who later handed him the Yemeni flag.

“The Yemeni people who turned out in their millions for early elections have sent a clear message of their desire for security and stability and change for the better. Today … we receive a new leadership and we bid farewell to a leadership,” he added.

The US-backed power transfer plan was hammered out by Yemen’s wealthy Gulf Arab neighbours, eager to end months of anti-Saleh protests that paralysed the country for most of 2011.

Months of weakened central government control have been exploited by a regional wing of al-Qaeda, which has expanded its foothold in the south of the country near oil shipping routes through the Red Sea.

A suicide bombing for which the militant network claimed responsibility killed at least 26 people on Saturday, hours after Hadi was sworn in as president.

“We call on all the sons of the nation to stand together alongside the political leadership … I call for national solidarity to confront terrorism, principally al-Qaeda,” said Saleh, who returned to Yemen last week from New York.

Saleh has said he will stay on the political scene as leader of his General People’s Congress (GPC) party, casting doubt on his commitment to relinquishing power.

Yemenis gathered outside the new president’s house on Monday demanding Saleh and his relatives be distanced from the military and security services, where they still wield influence.

“We came here to stress that the revolution is ongoing and to demand its second goal be achieved, namely the restructuring of the armed forces and the distancing of Saleh and his relatives from leadership of military and security units,” said Adel Abdullah, one of the protest organisers.

“We elected Abd-Rabbu [Hadi] to be president of Yemen, not to be an employee of Saleh”. — Reuters