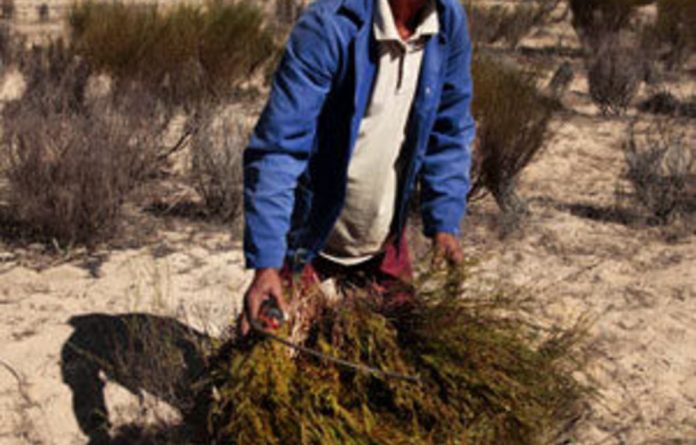 Farm workers swing their sickles through red branches, bundling them up before laying them out in the sunshine to dry.

The annual harvest at Groenkol Rooibos tea estate in the Western Cape helps quench the world’s growing thirst for rooibos tea, but farmers fear that climate change could destroy the delicate eco-system that their crop depends on.

Annual exports of rooibos have quadrupled in the last 13 years. The tea is popular for its perceived health benefits as well as its refreshing taste and has become a trendy drink in many countries. It contains no caffeine and just a tiny amount of tannin.

But rooibo only grows in this Western Cape region — nowhere else in the world.

“Rooibos is endemic to this area, it grows wild here and only here,” said Chris Du Plessis, who runs Elandsberg Eco Tourism.

Symbiotic survival
Very few plants can survive in the dry, sandy terrain but rooibos thrive in this area, living in symbiosis with micro-organisms in the soil. Farmers have tried to grow rooibos in Australia, the United States, even China — each time they’ve failed.

Willem Engelbrecht inherited Groenkol Rooibos Tea Estate from his father. Since taking on the farm, he’s noticed distinct changes in the weather.

“Over the last 10 years, there are more and more strange things happening,” said Engelbrecht.

The area already endures extreme weather conditions. The temperature drops to freezing in the winter, and reaches 48° degrees in the summer.

Now, summers are hotter and winters, drier. As a result, Engelbrecht has had to adapt his farming techniques.

Adapting to change
“In the past we used to plough the soil, these days we plough less and we keep material on the soil to act as isolation, basically to preserve the moisture.”

But if temperatures continue to soar, farmers like Willem will find it difficult to cope, posing risks to the R600-million rooibos industry.

Climate change experts warn that the Western Cape will be hit hard over the next 100 years.

“A plausible scenario is a further 48° temperature increase over much of this region,” said Francois Engelbrecht of South Africa’s Council for Scientific and Industrial Research.

Prospects dimming
“At the same time, this region is projected to become generally drier. So the general picture that is painted for all of the Western interior and coastal regions of South Africa is indeed not a very positive one.”

But those who depend on rooibos for their livelihood are trying to remain positive. The rooibos industry is booming, with the Cederberg area producing 12 000 tonnes of tea a year, half of which is sold for export. That’s enough to make 4.8-billion cups of tea a year.

Tea production also provides an estimated 4 500 jobs to the area, with much of the harvesting and drying done by hand.

“Rooibos is now gaining ground in a lot of countries and is grown from a very small base, so I think business can grow exponentially,” said Willem Engelbrecht.

The question for farmers like Engelbrecht, is how long this boom can last, before climate change kills off their crop. — Sapa-AFP

Alan Winde admits he is in a vulnerable group when it comes to contracting the virus, considering he is 55 years old, and a diabetic
Read more
Advertising
Continue to the category
Coronavirus