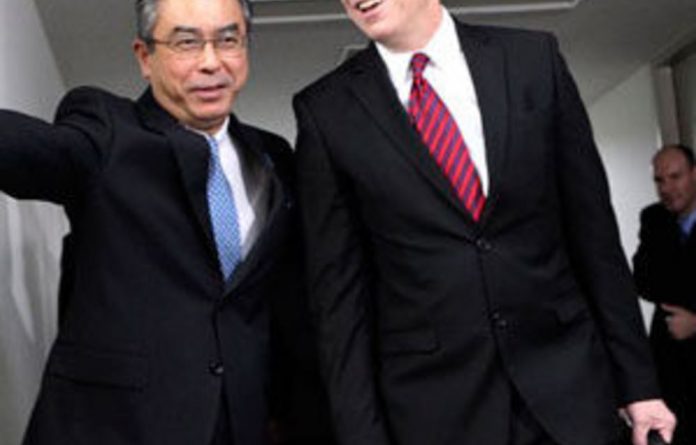 The United States said on Wednesday that North Korea had agreed to a moratorium on nuclear tests and long-range missile launches and to allow nuclear inspectors to visit its Yongbyon nuclear complex to verify a halt to all nuclear activities including uranium enrichment.

The announcement paves the way for the possible resumption of six-party disarmament negotiations with Pyongyang and follows talks between US and North Korean diplomats in Beijing last week.

“To improve the atmosphere for dialogue and demonstrate its commitment to denuclearisation, the DPRK [Democratic People’s Republic of Korea] has agreed to implement a moratorium on long-range missile launches, nuclear tests, and nuclear activities at Yongbyon, including uranium enrichment activities,” the US state department said in a statement.

“The DPRK has also agreed to the return of IAEA inspectors to verify and monitor the moratorium on uranium enrichment activities at Yongbyon and confirm the disablement of the 5MW reactor and associated facilities,” it said.

Aid in return
The state department said that in return the US was ready to finalise details of a proposed food aid package of 240 000 metric tonnes of nutritional assistance, and that more aid could be agreed based on continued need.

“The United States still has profound concerns regarding North Korean behaviour across a wide range of areas, but today’s announcement reflects important, if limited, progress in addressing some of these,” a state department statement said.

It said Washington reaffirmed that it did not have hostile intentions toward North Korea and was prepared to take steps to improve bilateral ties and increase people-to-people exchanges.

The announcement followed the sit-down negotiations between the United States and with North Korea last week in Beijing, the first such meeting since the death of its longtime leader Kim Jong-il in December.

The US special envoy for North Korea, Glyn Davies, told reporters those talks made some progress on issues including nuclear non-proliferation, North Korea’s demands for food aid and other issues at the heart of regional tension. The talks are aimed at laying the groundwork for renewed six-party disarmament negotiations with North Korea, whose ties with South Korea have deteriorated, especially after deadly attacks on the South in 2010. — Reuters