Carolina: Living in a town with acid water 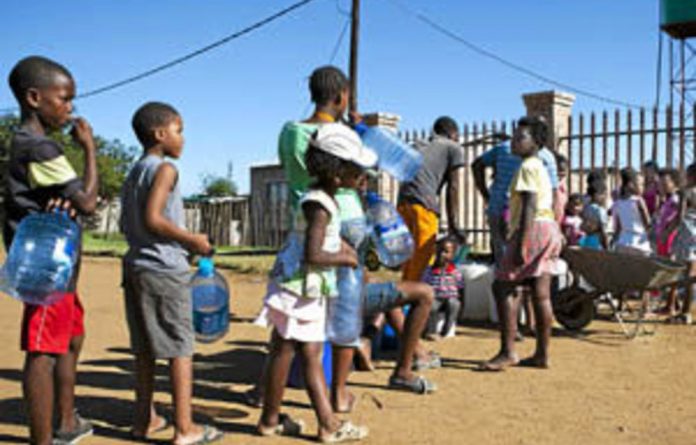 Oom Koos Swart has lived his whole life on the family farm just outside Carolina in Mpumalanga. Generations of Swarts have lived on the rolling slopes of the Boesmans River.

“Since I was young there were three mines here and we had no problem. But then we got these big open-cast ones. Now we have problems.” The rocks in the river where his cattle and sheep drink have been turning white from the acid mine drainage that is plaguing the town.

Things got serious when 82mm of rain fell in two hours in January. The dam water suddenly had dangerous levels of heavy metals. Now Swart cannot drink the water, but his livestock still has to. And although he does not know the long-term effects it will have on them, he suspects they will get sick. “I can only sit and wait to see what happens.” He knows the mines are responsible … they are the only thing that has changed in the area … but said it was too hard to prove.

A few meandering bends upstream from Swart’s farm is Carolina’s main water supply, the Boesmanspruit Dam. The overflow is stained red by polluted water. It was clean on New Year’s Day, said Swart.

Driving away from the dam along the mining dirt road is challenging. The double-trailer coal trucks hammering along throw up so much dust that the horizon vanishes. Every fold of earth reveals a wetland with lilies and ducks. But each one also has a ubiquitous coal mine. The land around each mine is stained black. The leaves on trees appear exhausted from fighting the weight of the mine dust.

A rail siding up the valley from the dam is piled high with coal. There are no walls stopping the coal from being washed away. This is what locals say is a major cause of acid mine drainage. Water, thick as treacle, is seeping from the siding into the nearby wetland.

One man who should be reaping the benefits of the unhealthy municipal supply is Jan Bezuidenhout, the owner of Janaqua Water. He uses reverse osmosis to clean his water before bottling it. But the heavy metals in the water are damaging his equipment. He keeps having to replace the membranes that catch the metals and needs to invest in heavy-duty equipment. Sales of his water have, however, increased considerably. “When I was young my father went to Italy. He said he was told to buy bottled water and not drink from the town supply. Then, we all laughed … we never thought we would be forced to buy water.”

He is sure the mines are to blame. “Twenty-five years ago we never had problems, but then these new mines started. Now we cannot drink the water. It is definitely the mines.” He tests his water every day with electrolytes and says there were days when the water from the municipal supply turns black … at worst it should be dark green. This was a “very bad thing”. When he still washed with the supply, a thick layer of slime would stick to his skin and the soap would not work. Now he uses his own water for most of his needs. Most people in Carolina — a town with one main street and about 17 000 residents — cannot afford this.

Standing outside his spaza shop in the baking sun, Jordan Mayaba holds a piece of paper from the local hospital. It says people should not drink the water, wash in it, or cook food with it. The community first noticed the problem on January 11.

“We didn’t understand the water taste, or the smell. So we went to the municipality,” he said. At first, they were told to boil the water before using it, but a white jelly would form on top when they did this. He ­compromised and bought drinking water and used tap water for everything else.

Now that this is also dangerous, he is faced with a conundrum. Water costs R12 for five litres.

“We have to use the town water; we cannot afford to buy water to wash and clean clothes. There is no choice.” The municipality has promised to provide water tankers, but they come only once a week. Pointing to a green JoJo water tank in the distance, Mayaba said that the only free … and clean … water comes from a fountain at the local mosque.

Finding the mosque is easy — just follow the children rushing along with empty water containers. Some have wheelbarrows, the containers bouncing about on the rough roads. The school next to the mosque is holding choir practice, voices filling the air as people around the mosque wait anxiously in a silent queue. They are worried the water will run out before they get to the front of the queue.

A few houses away from the mosque, Janice Mabuza is washing her dishes under her garden tap. Her bucket stands nearby, ready for the short trip. “We get only enough water to drink, but if we wash anything, we use this tap.” Her sister is at the hospital because she fell ill. “We know it is the water, but what can we do?”

Democratic Alliance councillor Helen McGinn has been showing groups of journalists around for weeks. “We need the attention. It is only after all the news reports that anything happened.”

McGinn is on the emergency task team that has been appointed to solve the problem.

“We need R250-million for another plant to handle the heavy metals and even this could take a year. For now, we have the interim measures [pouring lime into the town’s water to precipitate the heavy metals so they can be separated and removed], but we need to stop the pollution that causes this.”

Like most townspeople one talks to, she is certain the mines are responsible. But they are not talking. They come to meetings to know what is going on, but they have not yet “engaged”.

Until a long-term solution is found, the town is hoping for Eskom’s promised water pipeline from the Usuthu-Mhlathuze catchment. Even this was not a proper solution, said McGinn. It would leave the town dependent on another area that might have water problems. The only way is for the mining to stop.