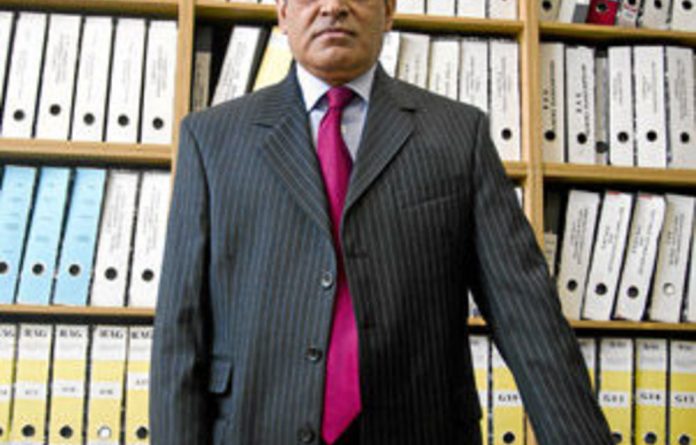 Controversial liquidator Enver Motala has secretly applied for a presidential pardon for fraud and theft – apparently as part of a bid to overturn the decision by the master of the high court to blacklist him.

And he has drafted ANC heavyweights to support him, including Winnie Madikizela-Mandela and party security boss Tito Maleka.

The master removed Motala from the panel of approved liquidators in September 2011, following an investigation prompted by his conduct as lead liquidator of the Pamodzi Gold group ­during the Aurora Empowerment Systems debacle.

Prior to this, Motala had used his political connections and empowerment status to build rapidly one of the wealthiest and most ­powerful liquidation practices in South Africa. He suggests that opposition to him has arisen partly from his success and that he has earned the “enmity” of trade union Solidarity because of his role as a Pamodzi liquidator.

A key issue for the master’s office was the fact that Motala had lied repeatedly about his 1978 conviction – under his previous name Enver Dawood – for credit card fraud.

Motala denied he was Dawood or that he knew of the credit card case, both in correspondence with the master and in evidence under oath at a hearing convened by the master.

When the deputy master driving the investigation, Christene Rossouw, pressed him to respond to allegations of the conviction and his name change, Motala withdrew from the hearing and, through his high-powered legal team, slammed the inquiry as an improper witch-hunt.

Rossouw then removed him from the liquidators’ panel, citing his dishonesty as well as other allegations of an irregular relationship with Aurora, the politically connected company whose board included President Jacob Zuma’s nephew, Khulubuse, and Zuma’s lawyer, Michael Hulley.

Now Motala has applied to President Jacob Zuma to expunge his criminal record and has called up his political connections to try to lobby his way out of trouble.

“Dear Phillip,” he writes, “I refer to the telephonic discussion which Comrade Tito Maleka [head of security at Luthuli House, the ANC’s Johannesburg headquarters] had with you this morning in reference to this matter. He requested me to forward the attached pardon application together with all its annexures to you — so as to enable you to kindly bring this to the urgent attention of the Honourable Minister, Mr Jeffrey Radebe MP — The Honourable Minister is aware of the pending application.”

Attached to the pardon application are various letters of endorsement, including ones from Maleka and Madikizela-Mandela.

Writing to Zuma on an ANC head of security letterhead, Maleka – a powerful and shadowy party figure – directly addresses “Dear Comrade President”, praises Motala’s integrity and concludes: “The application for pardon by comrade Motala is supported by this office.”

Despite this influential backing, Motala appears keen to keep his application under wraps. Somewhat comically, he flatly denied having lodged the application when ­questioned by the Mail & Guardian this week.

It could be that this is because the story set out in his plea to Zuma may not stand up to public scrutiny.

In his application Motala puts forward a remarkable alibi in which he claims that in the credit card case he took the rap for an activist uncle, advocate Yusuf Patel, who was supposedly abusing the card – which belonged to someone else – to gather funds for his escape into exile.

Motala states: “Patel was a practising advocate at the time and intimately involved in the struggle for a free and democratic South Africa — Following his arrest and brief detention, he was convicted of defeating the ends of justice and sentenced to undergo four years’ imprisonment. He had committed these offences as part of the struggle.”

Motala says that while awaiting the outcome of his appeal, Patel started drawing amounts on the credit card, which had been delivered to him in error.

When police traced the withdrawals, Motala says he stepped in.

“I immediately realised that should it become known that Patel was the real perpetrator he would be arrested — rendering his escape impossible. I immediately told the police that I was responsible.”

So far, so noble. But nagging doubts remain, not least because Patel is dead and cannot ­corroborate the story.

However, the M&G traced a highly respected struggle figure who knew Patel. The man, who asked not to be identified, was dismissive.

“Patel was never anywhere near the movement,” he said.

And if Motala thought he was going to get a free ride from the department of justice, he was mistaken. The department took the precaution of first referring the matter to the master’s office for comment.

In Christene Rossouw Motala appears to have met his match. The Pretoria deputy master delivered a blistering affidavit setting out the sequence of Motala’s lies about his conviction and exposing new queries about his honesty.

She notes: “I will demonstrate — that Mr Motala has not made full disclosure … Furthermore, it appears that he has deceitfully manipulated and twisted facts to support his story that his previous convictions were in fact committed by his now-deceased uncle, Mr Patel.

“Not only is this conduct insulting to the office of the Honourable State President but deserving of an immediate rejection of the application for pardon.”

Rossouw describes how, after The Citizen reported that Motala shared an identity number with convicted criminal Enver Dawood, she had directed inquiries to him about this.

Unconvinced, Rossouw summonsed him under the Companies Act to answer questions. His lawyers wrote back questioning her stance and again stating: “Our ­client does not have any fraud or theft convictions.”

Rossouw, meanwhile, established through her own investigation that Motala, in the name of Dawood, did have a 1978 conviction and had since legally changed his name to Motala. She persisted with the summons.

Under oath Enver Mohamed Motala was asked if he knew of Enver Mohamed Dawood. He denied knowing this and repeated his claim: “I don’t have any previous convictions.”

In her affidavit Rossouw says: “At no point did Mr Motala disclose or even allude to the facts on which he now bases his application for pardon. Mr Motala did not take the master into his confidence and admit firstly, that he had changed his name, and secondly, that he had a previous conviction for theft and 92 counts of fraud, albeit that the crimes are now for the first time attributed to his deceased uncle, Mr Patel.

“Mr Motala directly and through his attorney, had first, through a series of letters, evaded the master’s legitimate queries. Then he lied to the master point blank. This application for pardon is proof of the lie.”

She adds: “This is not a political matter. Our country has been a free and democratic country since 1994. There is no reason why Mr Motala, if it is indeed true, could not have made full disclosure of his uncle’s conduct years ago.

“There is no reason why Mr Motala could not have taken me into his confidence when I specifically sought this from him.”

Motala, through his attorneys and in his pardon application, alleges that Rossouw was not legally entitled to hold an inquiry, abused her position and should have disclosed the damning evidence in her possession.

In her affidavit she responds: “I deny that the inquiry was unlawful or unfair. Mr Motala lied freely and of his own accord. No third party influenced him to do so.”