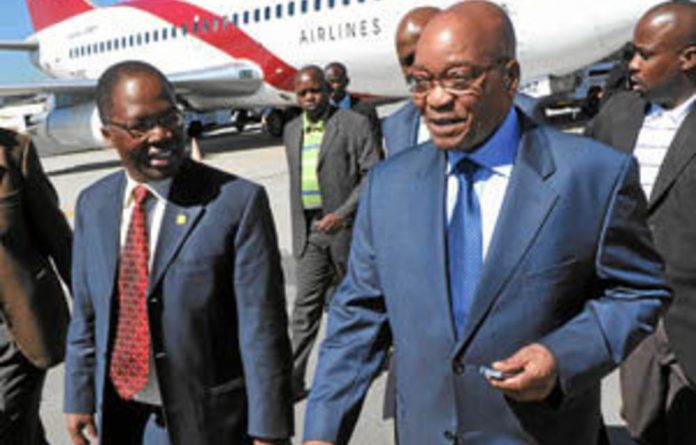 It is a matter of interpretation whether the South African National Taxi Council (Santaco) is using the troubles of Velvet Sky as a handy excuse to back away from its own airline plans, or whether things really have changed so much that is has no choice.

Either way, Santaco is considerably less gung-ho about launching regular flights between Johannesburg and airports such as Bisho than it was in mid-2011, when it said it would be operational by September. This changed to December and now even the latest target of being in the air by Easter is looking shaky.

“The public is eager to see us taking off. We get calls inquiring when we’re doing it all the time,” said project leader Nkululeko Buthelezi. “From where I’m standing that’s the only pressure. But from a business point of view we’re being very cautious about committing to a timeline … We need sufficient capital and sufficient resources before we start.”

Industry experts said the success of Santaco’s plan to fly to more rural destinations will likely depend on factors it cannot control, such as the price of oil, the speed at which Mthatha Airport can be upgraded and whether people will be willing to switch from the social experience of road travel to the more alienating atmosphere of air travel.

Succeed or fail, Santaco Air could represent the last opportunity for the expansion of local low-cost air travel, which is why competitors that would not touch routes such as Bisho hope Santaco pulls it off.

“Aviation isn’t like that movie Field of Dreams, where if you build it they will come,” said Mango chief executive Nico Bezuidenhout. “We took a cursory look at Bisho, for example, and that airport would need a lot of investment to make it viable.”

That said, Mango would not mind somebody else taking the risk and providing a new wave of customers who may also be interested in flying between Johannesburg and Cape Town, for example.

Low-cost airlines have to be in the business of stimulating demand, rather than trying to undercut established operators that have big brands, efficient operations and the kind of scale that keeps costs down, Bezuidenhout said, and Santaco might just achieve that.

In all other respects, the bus could be said to be dangerously overcrowded. “Actually, we expected to see failures starting to happen some months ago,” said Kulula chief executive Erik Venter. “It is remarkable to see how much credit some suppliers have granted some airlines to keep them flying. It’s just bizarre. We know of guys out there who haven’t been paid for six months, yet they still keep supplying. Some of the smaller suppliers may well go down if those airlines go down.”

Venter echoed what one hears from many players and experts: times are tough for budget airlines. Things are perhaps not as bad as they were after the 9/11 attacks in the United States or during the bird-flu scare, but those were isolated incidents that blew over and passenger numbers recovered. Right now, said aviation expert Linden Birns, airlines are facing a longer term “conspiracy of circumstances that make for a lethal cocktail”.

“You have this situation in Southern Africa where the fuel price has gone up by so much and maintenance costs have gone up, and in Southern Africa you’re paying for a lot of those overheads in dollars while your revenues are in soft currencies. Compound that with the economic downturn: there is only so much elasticity in the market in terms of what people are willing to pay for tickets.

“If you have old planes you leased cheap, you used to be able to offset the extra fuel they burn, but fuel is up so much there is no benefit at all from operating an inefficient aeroplane, no matter how cheap it is. Then you have a new entrant like Velvet which comes in and tries to buy market share with low fares. That’s just not going to work.”

In such circumstances, small or new players are going to run into trouble unless they have extremely deep pockets. The best proof, perhaps, is just how much the big, established operators are suffering. Comair, the holding company for Kulula and holder of the local British Airways franchise, reported its first loss ever last month. Mango is in its first unprofitable year since its launch. It is an open industry secret that 1Time is at the very least considering a restructuring that would involve retrenchments, although the company was not available for comment.

And then there is Velvet Sky. A troubled player in the market is doing nobody any favours, it would seem. Other operators may see a slight increase in average ticket prices without Velvet around, but that is about the best they can hope for. In the meantime they have to deal with the fallout. Santaco will almost certainly find it tougher to raise capital now than it would have in January.

Bezuidenhout said Mango’s association with parent company SAA did not necessarily reassure suppliers that they would be paid on time and in full, and passengers got more nervous buying tickets in advance in such an environment. Kulula’s Venter thought it necessary to send staff an email, in the last week of February, to reassure them that “Kulula is definitely NOT [sic] going out of business”. That was not the worst of his worries, though.

“When money is tight, you have some airlines that try to cut costs on long-term maintenance, where you can cut corners for a while,” Venter said. “If they don’t manage to catch up on that maintenance, well, the risk grows. If an airline goes out of business and passengers lose their money, that’s bad for all of us, but it’s not the same thing as a plane falling out of the sky.”

Although there is no proof that such risks are manifesting yet, the fear itself may be enough to put pressure on the Civil Aviation Authority to increase its vigilance and require guarantees that ticket holders will be refunded if an airline goes bust. Both will only further increase the financial pressure on operators.

But none of that may be enough to discourage new entrants from trying their hand. “There’s this glamour, this air of mystery about the airline business that seems to attract a disproportionate number of new entrants,” said Gidon Novick, former joint-chief executive of Comair and co-founder of Kulula.

“It’s a lot more commoditised now, but flying itself is still a romantic thing. That seems to keep this boom-bust cycle turning.”

It may be cheap, but the consumer carries a much higher risk
South Africa was fairly late in coming to the low-fare airline game, well after the concept had proved successful in the United States and Europe, but once launched, the likes of Kulula had a significant influence on the market.

But for all its success on the cheap end, the scheduled airline game has experienced its fair share of failed businesses.

There is still some debate as to whether Nationwide, the highest profile and most recent failure, was a victim of its business model or of over-eager regulation. Maintenance issues, including an engine falling off a plane during takeoff in Cape Town in late 2007, certainly didn’t help. But some industry watchers maintain that the planes it was operating simply weren’t big or efficient enough to break even at the high fuel price, even if its “all business class” model had worked.

Other outfits failed as a result of variations and complications on these themes and with various levels of impact on consumers. Sun Air, privatised in 1997, effectively went out of business twice, amid a huge wrangle about who was to blame. When Flitestar, popular for its early challenge to the state-owned operator, ceased operations in 1994, many blamed South African Airways for its demise. The perhaps ill-named Phoenix never made much impact, but provided another case in point. The various failures also point to an ongoing problem consumers face.

“When you enter into a low-fare contract, you forgo a lot of protection,” said industry watcher Linden Birns. “It is cheap for a reason. And every time an airline like that goes down, people expect other carriers to honour those tickets. That is like saying you bought a bottle of milk from a supermarket and it was sour and now another supermarket must replace it.

“It is not going to happen.”