The sounds of software 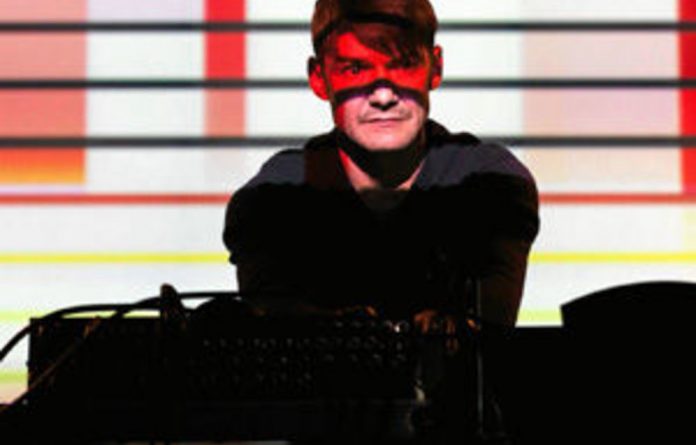 Don’t expect a “Hello Cape Town, are ya havin’ a good time?” when he performs there this Friday night at the Design Indaba’s music festival, A Taste of Sónar, he warns.

“I really like to be spontaneous and I know some show elements are important,” Bender says in a Skype interview from Germany, “but whenever I do this it goes wrong.”

He lives with his family in a farmhouse on the edge of Chemnitz, previously known as Karl-Marx-Stadt, in the former East Germany, from where he runs the revered experimental label Raster-Noton, which he co-founded in 1996.

“I’m a German,” he says. “We had to recognise that when we started the label … we really like black music, but on the other hand we had to say … ‘I’m not black’. We had to say ‘I never grew up in the Bronx in New York, I’m an East German’.”

Computer craftwork
Self-taught Bender creates his abstract, minimalist techno digitally by using sine tones, digital clicks and effect plug-ins. His main instrument in concert is a laptop — as it is in the studio — and he uses some controllers. “But in the end I play ­software.”

When he started Byetone (named after a Russian-made microphone) in the late 1990s he wasn’t sure whether he should play live because it is difficult for the audience to recognise what the laptop musician is doing on stage. “In the end I decided I really wanted to be on stage and when I go on stage I have to do something that is connected to the moment. So that is I why I don’t want to prepare too much. I have to take a risk on stage like every traditional musician. So when I am very good it can be much more exciting for the audience.”

Bender uses abstract visuals to enhance his shows — the rhythm of the music is transformed into a visual graphic equivalent and by using his computer Bender controls the abstract animations in real time on the screen behind him.

“As a laptop artist I am very static, so with the visuals the focus isn’t always on me, on my face or my body language, the focus is much more on the screen. But music-wise I do a kind of remix when I play live … I remix myself, so I have a lot of prepared sounds. I don’t know yet about a time structure, I don’t know yet about the dynamic in between the sounds — this I do live on stage.

“I have seen a lot of electronic artists — for me I really enjoy it when the music is born in the moment where you listen or see the act … it is really easy to recognise that, what is produced there on stage in the moment, versus what is preproduced.”

A critical point of view
Bender says his Cape Town show — his first in Africa — will be an up-tempo mix from his albums Death of a Typographer and Symeta, plus maybe one or two new tracks.

Bender acknowledges it can be hard to play in some of the northern hemisphere countries.

“People there are a bit disconnected. They have a critical distance. When you do a concert the audience takes a critical point of view — the artist has to do something first to make the listeners happy.

“I love playing in South American or Mediterranean countries because they are much more open — they don’t have this critical view so much.

“They come there to have fun and if you are not totally boring you have a good chance for them to have fun … you don’t have to deliver the fun!”

Bender grew up in Karl-Marx- Stadt and did an apprenticeship as a men’s tailor, but knew from early on music was to be his life, based on an unusual influence. “It was a radio station that influenced me. We could watch West German TV and listen to West German radio. There was a radio show, two hours every night, that had strange experimental music from the UK, the States and West Germany. I recorded it every night.”

That is where he heard new favourites such as Cabaret Voltaire, Joy Division, Throbbing Gristle, Spacemen 3 and krautrock pioneers such as Neu! and Kraftwerk.

Byetone’s hypnotic, futuristic techno descends from krautrock — sans the rock, but with the funk and the groove. “The most important thing for me is the groove of music. By repeating and by adding and layering there comes a kind of energy and this is for me shamanic — where I can stop my thinking and the music comes through my body.”

German experimental and mostly electronic music from the 1960s and 1970s was generically called Krautrock by the British musical press, and it included influential bands such as Kraftwerk, Neu!, Can, Tangerine Dream, Amon Duul and Faust. It was the internationalist soundtrack of Germany’s youthful revolution circa 1968.

Kraftwerk, for example, has strongly influenced both hip-hop and techno. The funky robots’ tracks Trans Europe Express and Numbers were the blueprint for 1980s hip-hop pioneer Afrika Bambaata’s seminal Planet Rock. As a black New Yorker he sensed the funk in this north European computer music and used it as the melody and rhythm for his own track. In the 1980s it spawned techno when three black teenagers from Detroit, Derrick May, Kevin Saunderson and Juan Atkins, paired Kraftwerk’s music with funk.

Krautrock also influenced artists in other genres, including David Bowie, the Fall, Joy Division and more recently Wilco, Radiohead, Tortoise and Stereolab, among others.