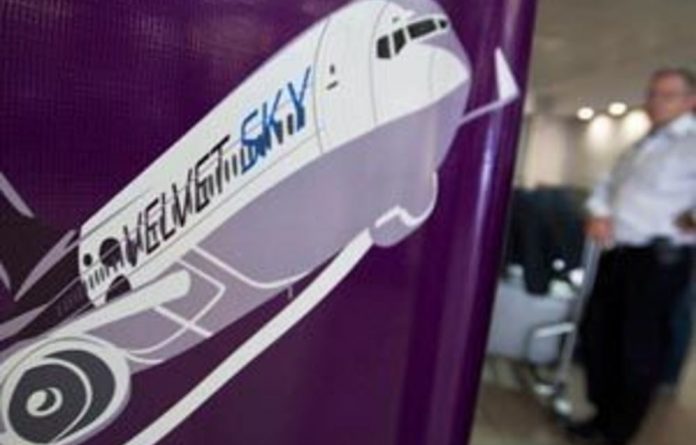 Velvet Sky, the troubled low-cost airline, has been accused by BP Southern Africa, to which it owes R29-million of resorting to “desperate cash-raising measures to stave off bankruptcy”.

BP made the claim in an urgent court application last week to have the airline provisionally liquidated, alleging that the company had failed to pay for aviation fuel despite a debt-restructuring agreement reached in early February.

Velvet has been in the spotlight because of its connection with key figures in the Aurora Empowerment Systems mining debacle. Its “business growth consultants” include Thulani Ngubane, a former Aurora director, and former consultants Solly and Fazel Bhana, and Tony Chammas, as well Yaseen Theba who did marketing work for Velvet and Aurora.

The airline, which has operated for almost a year, suspended operations on Monday until March 5 after several of its flights were cancelled when it failed to pay its service providers, including BP and SAA Technical.

In its application in the Pietermaritzburg High Court BP said the airline was surviving “from hand to mouth” and misleading the public with offers advertised on its website.

Customers were told that if they paid R400 before April 7, they would receive a R600 voucher to spend on their next flight with Velvet Sky.

BP said the company was now “raising cash from hopeful customers who believe they will be able to redeem their vouchers at a later date when they want to fly again. However, due to the respondent’s precarious financial position, there is every chance that the voucher will be irredeemable.”

Velvet Sky’s chairperson, lawyer Stephen Nthite, said this week only 20 customers had taken up the offer.

BP continued: “Steps need to be taken urgently to prevent this further misleading of the public – at this stage a liquidation is the only way to prevent the respondent from continuing with this course of action. The respondent is on the point of going out of business and the minute that it does so, its business reputation will be severely damaged.”

Excalibur also made a deal to buy a 29.6% stake in low-cost airline 1Time for R39-million, an arrangement that was cancelled after Excalibur failed to meet due diligence conditions.

Nthite told the Financial Mail in January that despite the initial setback Excalibur would continue to buy shares in 1Time. 1Time Holdings chief executive Rodney James said the company had partnered Excalibur “because, at the time, it had strong Dubai shareholders who wanted to invest and expand in Africa”.

Velvet Sky’s chief executive, Durban businessperson Dhevan Pillay, said initial funds from the Dubai investors had been “absorbed in expenses”, but the company had revised its financial structure and secured “fresh investment capital” that was being finalised with new investors. The identities of these investors are not known.

The Mail & Guardian reported last year that Ngubane and the Bhana brothers had become involved in the “day-to-day running” of Velvet Sky. Nthite said they were brought in as “business growth consultants”.

Velvet Sky’s Amod represented the Aurora directors at the inquiry into the liquidation of mining company Pamodzi Gold. Aurora took over Pamodzi’s mines in Grootvlei on the East Rand and Orkney in North West until liquidators removed it as the preferred bidder early last year.

Aurora’s directors as well as the Bhanas, Theba and Chammas have faced allegations that tens of millions of rands made from gold sales were diverted into their private accounts while mineworkers went unpaid and the mines’ assets were stripped.

Pillay told the M&G this week that Velvet Sky remained “positive” and had “every intention to fulfil all our obligations”. He blamed fuel price increases and “an unprecedented increase in airport taxes” for “hindering” the company’s efforts.

The liquidation application was postponed to March 7.

The coronavirus and the rise of the network society

Claws out over Cats unit