Clean-ups continue after deadly US tornado 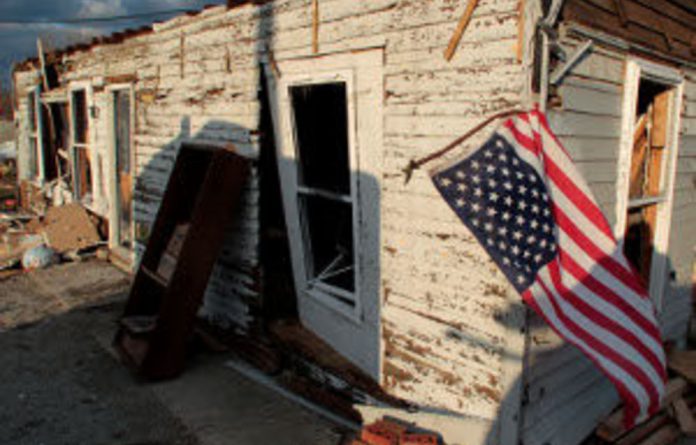 Rescue teams and residents combed through storm-wracked towns to assess damage on Saturday from a chain of tornadoes that cut a 1 600km swath of destruction from the Midwest to the Gulf of Mexico, as the death toll rose to at least 39 people.

The fast-moving twisters spawned by massive thunderstorms splintered blocks of homes, damaged schools and a prison, and tossed around vehicles like toys, killing 20 people in Kentucky, 14 in neighbouring Indiana, three in Ohio and one in Alabama, officials said. Georgia also reported a storm-related death.

“We’re not unfamiliar with Mother Nature’s wrath out here in Indiana,” Governor Mitch Daniels told CNN during a visit to the stricken south-east corner of the state.

“But this is about as serious as we’ve seen in the years since I’ve been in this job,” he said, standing against the backdrop of the hard-hit town of Henryville, which declared a nighttime curfew to prevent looting.

Friday’s storms came on top of severe weather earlier in the week in the Midwest and brought the overall death toll from the unseasonably early storms this week to at least 52 people.

President Barack Obama called the governors of Indiana, Kentucky and Ohio to offer condolences and assure them the federal government was ready to help if needed, the White House said.

Television footage from some of the worst-hit towns in Indiana and Kentucky showed houses ripped from their foundations, trees downed and stripped of their foliage, and rubble scattered across wide swaths of land.

In Georgia, light planes were lifted off the tarmac of a regional airport in Paulding County and thrown back on the ground. In Indiana, a school bus was slammed into a building.

Tony Williams (46) owner of the Chelsea General Store in southern Indiana, said four people died in the Chelsea area, including four-year-old Daylin Terry Jackson and his great-grandparents, Terry and Carol Jackson, both in their late 60s.

The boy and his mother, Amanda Jackson, were in a basement when the storm hit on Friday afternoon, and he was torn from her arms by the tornado. The mother survived, but her grandparents who were upstairs both died.

“She was in the cellar with the boy when the tornado hit. It blew him right out of her hands,” Williams said. “They found the bodies in the field outside,” he added, referring to Daylin and his great-grandparents.

Hurt, but alive
In one sign of hope amid the destruction, a two-year-old girl, orphaned by the tornado, was found alive but badly hurt in a field in south-east Indiana kilometres from her home after a twister cut through the area, authorities said.

The toddler, who remained in critical condition in a Kentucky hospital, was with members of her extended family. But her parents, a two-month-old sister and a three-year-old brother, were all killed, said Cis Gruebbel, a spokesperson for Kosair Children’s Hospital in Louisville.

“When she was brought down here, they didn’t know who she was,” said Brian Rublein, another Kosair spokesman. “At last report she was in critical condition.”

In Henryville, birthplace of Harland David “Colonel” Sanders, who founded the Kentucky Fried Chicken fast-food chain, ground zero for the storm was a downtown complex housing an elementary, junior high and high school, where 1 400 students gather on a normal day.

Nearly all them were evacuated on Friday before the tornado struck. But about 40 staff and students who were the last to leave on school buses turned back when they saw ominous signs of the approaching storm in the sky.

They took shelter in an inner office in the elementary school where they rode out the tornado, even as it ripped the front off the building, leaving a dangling mess of twisted metal and insulation. Astonishingly, only one resident of the town died, according to rescue officials.

“We could have been in big trouble,” said Pam Horton, the elementary school treasurer. “I will never take tornado warnings lightly again.”

One of the school buses was flipped on its side by the storm. Another sat with its engine sheared off the chassis and its rear end embedded in the front of Budroe’s restaurant, a diner across the street where other residents had taken shelter.

Insurance losses
The band of tornadoes, with at least several dozen sightings and touchdowns, has already been compared to the “Super Outbreak” of twisters of April 1974, one of the largest and most violent in the United States.

Friday’s storms came less than a year after a series of tornadoes caused some of the worst insured losses in US history, and the insurance industry is likely facing substantial costs again.

In the northern Kentucky town of Crittenden, where tornadoes ripped roofs off houses and damaged apartment blocks, low-security prisoners in orange jackets were brought in to help with clean-up efforts.

In another hard-hit Kentucky town, 48-year-old carpenter Kevin Stambaugh described how he survived a twister that killed his two neighbors, who he said were found dead huddled together in their kitchen. He said he also lost 25 horses in the storm.

“The Lord was looking out for me,” he told Reuters outside a Baptist church in the town of Morning View, adding that wind had pushed him down the stairs to his basement and pinned him between a bar and a wall. “The windows were shattered and shards of glass were swirling around near my head.”

At least 300 people came to the Piner Baptist Church, advertised as a relief centre, to volunteer after the storm.

“Being from here, born and raised, the hardest thing is knowing that the houses I grew up seeing every day are gone. There are no words,” said volunteer Amy Heeger (38) who works for a car auction company but headed for the church to help out.

In Georgia, an 83-year-old woman was found dead near a drainage pipe after she wandered from her home in severe weather on Friday, possibly to seek better shelter. A public safety official said she may have died after water rose in the pipe.

Alabama authorities said 40 homes were destroyed and 150 damaged in two northern counties on Friday. One person died in a home in Tallapoosa County, an emergency official said.

This week’s violent storms raised fears that 2012 will be another bad year for tornadoes after 550 deaths in the United States were blamed on twisters last year, the deadliest year in nearly a century, according to the National Weather Service. – Reuters