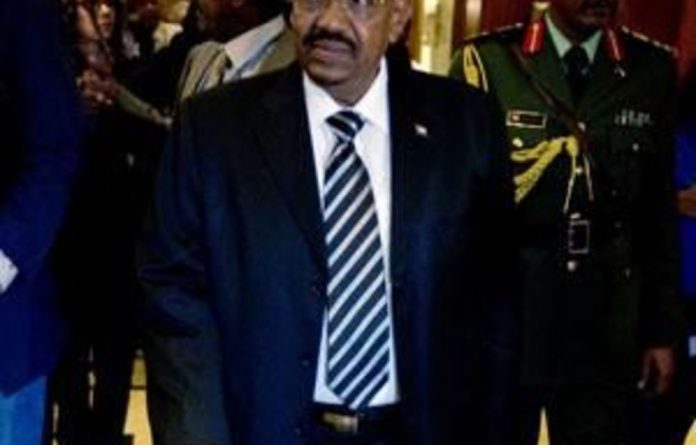 Sudan’s President Omar al-Bashir danced on Saturday with his defence minister at a rally for paramilitary troops two days after the International Criminal Court issued a warrant for the latter’s arrest.

“We will start a major campaign to face the enemies of God and the state,” Defence Minister Abdelrahim Mohammed Hussein told more than 1 000 members of the People’s Defence Force (PDF), formed during the country’s 22-year civil war.

The rally, designed to showcase the PDF’s fighting readiness, was the first of its kind since the 2005 peace deal that ended the civil war and led to South Sudan’s independence last July after an overwhelming vote to separate.

It came as analysts and diplomats warn that escalating tensions between the two countries threaten to erupt into direct conflict.

Bashir and Hussein, both in military uniform, danced together to a PDF rallying song after the president announced an expansion of the PDF forces.

“We will call these troops a ‘deterrence force’,” Bashir said at a Khartoum football stadium.

He said he was ordering all state governors to open training camps for fresh PDF recruits.

Each state is to form one brigade, with an additional seven coming from the capital Khartoum, the president said after rifle-toting male and female members of the militia staged a march-past.

The new recruits will “beat anyone who tries to disturb the security of Sudan”, Bashir vowed.

Defend ‘dignity of Sudan’
On Thursday The Hague-based International Criminal Court said it had issued an arrest warrant for Hussein, covering crimes against the civilian population in Darfur, in Sudan’s western region.

“We want to say to them: we will defend the dignity of Sudan” and its Islamist regime, Bashir responded.

Hussein (60) is the sixth person sought by the ICC or before the court for crimes committed in Darfur, where rebel groups drawn from the region’s non-Arab tribes rose up against the Arab-dominated Khartoum government in 2003.

Among those being sought is Bashir himself.

The court’s chief prosecutor, Luis Moreno-Ocampo, said in December when he asked for the warrant against Hussein that it would cover crimes against humanity and war crimes committed in Darfur from August 2003 to March 2004.

Hussein, who was interior minister from 2001 to 2005 and also Bashir’s special representative for Darfur from 2003 to 2004, is wanted for allegedly coordinating attacks against civilians in villages of west Darfur.

Sudan’s foreign ministry said the warrant against Hussein means “nothing” and Khartoum does not care about the decision.

At the rally, Bashir also responded to comments on Wednesday by US Secretary of State Hillary Clinton.

She accused him of trying to undermine the new South Sudan, and added that Washington would consider increasing pressure on Bashir to reverse course.

Sudan has been under US economic sanctions since 1997.

“The Americans always said they will treat Sudan with a carrot and stick. We want to say to them: we don’t want their carrot because their roots are poisoned and nasty. And we don’t fear their stick.”

Khartoum denied the claims, but the US expressed alarm. It called such incidents “unacceptable”, and said they threaten to raise tensions between the two states. – AFP