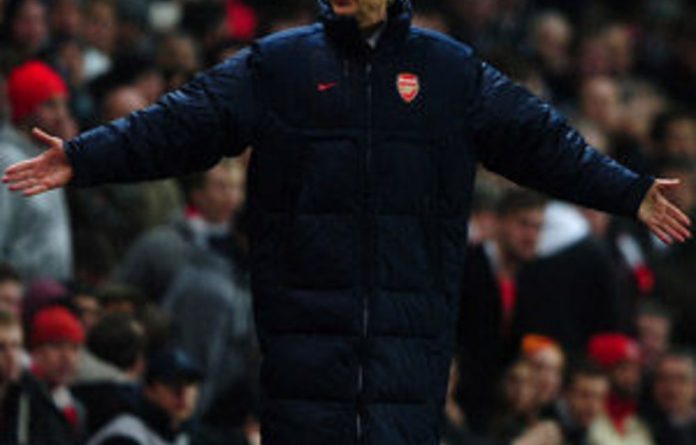 Former champions AC Milan squeezed into the quarterfinals of the Champions League on Tuesday, though not as comfortably as expected as they lost 3-0 at Arsenal to progress 4-3 on aggregate.

Milan were joined in the last eight by Portuguese side Benfica.

Benfica produced a professional performance to beat Russian champions Zenit Saint-Petersburg 2-0 (4-3 on aggregate) on the night to end a three-game winless streak and make the quarters for the first time since 2006.

“Did I lose weight during the match? My players have already told me that I must lose weight,” he said, laughing.

“Often one believes that it is going to be too easy … I am upset about the defeat, but the objective was to reach the last eight in Europe’s top competition, and with the players we will get back from injury we could go further.”

Arsenal get the perfect start
Looking for a five-goal winning margin, the Gunners got off to just the start they hoped for, grabbing an early goal as defender Laurent Koscielny rose unmarked to head home.

Their spirits soared when Czech international Tomas Rosicky, passed as fit just before the game, doubled their lead after tucking the ball home inside the near post and then again when Robin van Persie scored from the penalty spot.

But Van Persie spurned a superb chance to level the game on aggregate early in the second-half, but with the Milan keeper on the ground and the goal at his mercy he chose the wrong option. Christian Abbiatti was able to recoup the ball and clear the danger.

Milan, too, had a rare chance to put the tie to bed but Antonio Nocerino shot tamely at Polish keeper Wojciech Szczesny.

“They can only be proud of their performance,” Wenger said.

“The team has fantastic spirit and showed some fight after the first tie, but unfortunately we go out. We had the chances for a goal. We have paid the price for a bad first game. But we have given everything. That is all you can do at the top level: give everything and then you accept the result, he added.”

Benfica go through with relative ease
The match in Lisbon was a far calmer affair but the hosts went in cheered after taking the lead on the stroke of half-time as Uruguayan Maxi Pereira shot home after a brilliant back heel by Axel Witsel set him up to put them level on aggregate but ahead on away goals.

Benfica should have taken a 2-0 lead early in the second-half but Jardel headed over the bar when well placed to score.

But a solid second half performance from the hosts was capped when Nelson Oliveira, who had only come on with 10 minutes remaining, scored their second in time added-on time to secure their place in the last eight.

Pereira and coach Jorge Jesus now believe Benfica could go all the way and win the trophy for the third time — their first since 1962.

“We deserved to win and I’m really happy with this result, said Pereira. Now we’re in the quarterfinals and we can beat anybody.”

Jesus said: “We now go in to the quarterfinals with the same ambitions we had at the start of the season and, whoever we get in the draw, we think we can go far.” — Sapa-AFP