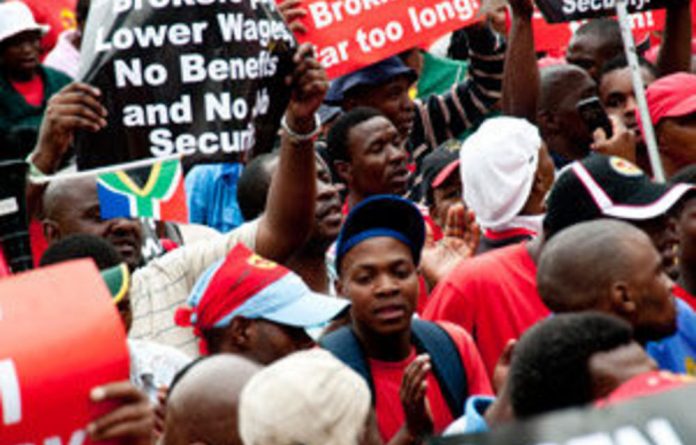 Insisting the march against labour brokerages and e-tolling was not an anti-ruling party demonstration, ANC Youth League president Julius Malema has told thousands of protesters that he was there with them to remind the government to focus on the needs of workers — and to implement the resolutions of Polokwane.

At the ANC’s elective conference in Polokwane in 2009, Cosatu backed Jacob Zuma in his successful bid to replace former president Thabo Mbeki as the ruling party’s leader, but has since become frustrated with the failure of Zuma’s government to implement the ANC’s Polokwane resolutions, which called for radical policy changes.

“This is not an anti-ANC march. It can never be. You are the ANC as am I. We will die the ANC!” Malema told protesters outside the offices of the Gauteng labour department in Braamfontein.

Before handing over a memorandum to a labour department representative, Vavi — Cosatu’s general secretary — told the crowd that the union federation’s campaign had “only one reason: We are defending the living standards of South Africans … we are fighting shoulder to shoulder with you, comrades, to remind those who forgot the power of the working class.”

“Yes, we have political freedom, and many have houses,” said Vavi. “But white monopoly capital has benefited the most since 1994. Today there are 45% of our working people living on R10 a day. This is unacceptable. People go to bed hungry while those in power have money to drink the whole night, regardless of our people’s poverty.”

“We live in a deeply unequal society,” Vavi told the crowd. “This not a narrow issue of e-tolls and labour brokers: this is a class war.”

Young Communist League leader Buti Manamela was on hand to deliver a jab at the middle-class protesters and civic organisations who had joined the march primarily to protest against the government’s plans to introduce e-tolling on national roads this year.

“Those opportunists joining the march only because of e-tolls must now share the struggle of the worker!” said Manamela.

Mzwakhe Mbuli, the “people’s poet”, was next up, taking the microphone to underline to worker’s struggle against labour brokerages: “It’s not labour brokers, it’s labour breakers! Down with slave labour!”

The SACP’s representative was more terse: “Capitalism is the problem in SA. The labour brokers are blood-sucking f***ng capitalists.”

If it’s brokers, fix it
Cosatu says it first raised the issue of labour brokers as a force of oppression set against workers in 2010, initially in private and through proper channels, but received no satisfactory response.

As it grew clearer that the government was not considering, at least not in the short term, the outright ban Cosatu has demanded, the union organisation’s condemnation of the entire sector grew more fierce, culminating this week in an unequivocal likening of labour brokers to slavers who force South African workers into economic bondage.