Prince Harry and the Bolt of lightning 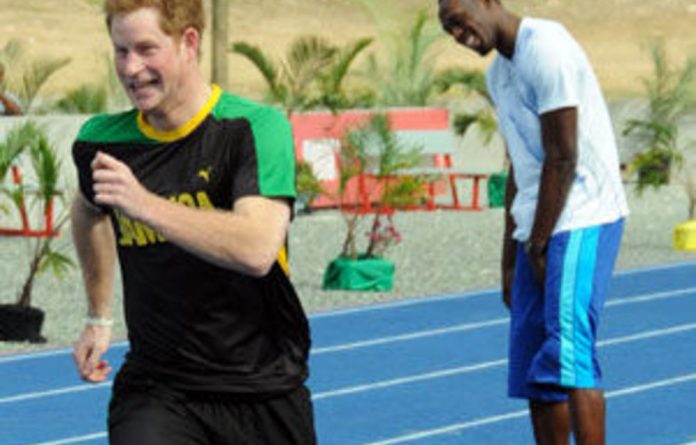 It wasn’t much of a race, but then it really couldn’t have been as the world’s fastest man and Britain’s Prince Harry met up on a track on Tuesday in the Jamaican capital.

Wearing a track suit emblazoned with Jamaica’s colours of green, black and gold, the prince got off to a false start and was about 50m down the track as Usain Bolt bent over with laughter. The Olympic medalist then jogged up to a grinning Harry, making one of his signature skyward points for a crowd of onlookers at the University of the West Indies in the Jamaican capital.

Harry then joined Bolt for a few pointing poses to an appreciative crowd.

Later, the two exchanged pleasantries and talked about running for a small audience, including many athletes. The prince noted Jamaica’s international reputation as a track and field powerhouse and said it was impressive for a small nation of nearly 3 million.

“Don’t go running off to America because you have a clear talent your country needs,” he told a group of up-and-coming Jamaican athletes as he sat beside Bolt.

Harry is touring the Caribbean as part of a Diamond Jubilee tour in honour of Queen Elizabeth II as she celebrates 60 years on the throne. The 27-year-old prince, who made earlier stops in the Bahamas and Belize, arrived by private jet and received a 21-gun salute from members of the Jamaica Defence Force.

Harry also met with the new prime minister, Portia Simpson Miller, who repeated her position that Jamaica should sever ties with the British monarchy after a lighthearted lunch with Harry and several guests at a 19th-century Georgian-style mansion. Jamaica has been independent from Britain since 1962 but still recognises the queen of England as the titular head of state.

“This is just another phase in our political history,” she told reporters after the lunch, without offering a deadline for a possible change.

But she stressed that Jamaica would continue to have very close ties with Britain and that she harboured no bad feelings toward the queen.

“She is so warm. We’re all in love with her,” she said. Minutes before, she quipped that she was charmed also by Harry, telling reporters: “We might not let him go.”

About a decade ago, former Prime Minister PJ Patterson made a similar call to replace the queen but the effort fizzled amid political bickering. In 2002, Jamaica’s parliament moved to sever ties with its former ruler by changing its oath of allegiance from the queen to the Jamaican constitution.

The change to a republican form of government requires a public referendum and amending Jamaica’s constitution.

Harry arrived for their lunch in a black Range Rover under heavy security. The two embraced and warmly chatted on the steps of the Devon House mansion, where they ate citrus salad with mango dressing, jerked pork, curried coconut shrimp and Jamaica’s Blue Mountain coffee.

In an interview Thursday with The Associated Press, Simpson Miller said political change is necessary to eliminate the vestiges of colonialism.

“I think the fact that August coming will be 50 years since we have gained our independence, that it’s time for us to sever the ties,” she said.

Women love the prince
At the track stadium, though, there was nothing but enthusiasm for the prince, especially among the young women in the crowd. Female university students waved enthusiastically and cheered for him, calling for him to come out of his motorcade.

“It’s the first time I have ever been this close to royalty,” 23-year-old medical student Shikera Fearon said as the prince pulled away.

Among other Tuesday stops, Harry visited a children’s hospital and the headquarters of an educational centre that works with at-risk youth in gritty downtown Kingston, where he energetically shimmied with youngsters showing off their dance moves and met Bob Marley’s widow, Rita.

About a dozen demonstrators called for Britain to pay reparations for slavery outside one of Harry’s stops in downtown Kingston, not far from the restive neighbourhood of Denham Town where six people were killed during a Monday gun battle between police and alleged criminals.

The youngest son of Lady Diana and Prince Charles was by far the biggest royal draw in the Caribbean, but Buckingham Palace also sent the Duke of Gloucester to the British Virgin Islands and the Earl of Wessex to Antigua.

In Tortola, the main island in the British Virgin Islands, throngs of schoolchildren waved the Union Jack flag for the Duke of Gloucester, a cousin of Queen Elizabeth II.

In Antigua, Prince Edward and his wife Sophie, the Countess of Wessex, stopped at Nelson’s Dockyard, a marina named after Admiral Horatio Nelson, who headed the British naval operations in the late 1700s. The island also recognizes Queen Elizabeth II as its official head of state. — Sapa-AP