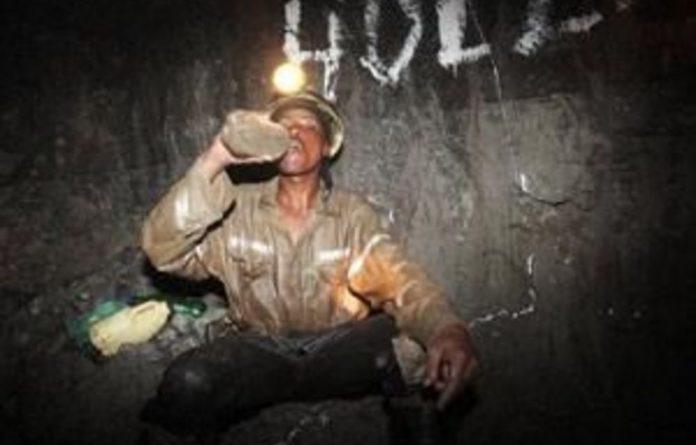 South African miners are falling victim to tuberculosis (TB) at an alarming rate, with deaths from the disease outstripping those from fatal accidents in mines. Some studies suggest that as many as 13 times more miners die of TB than mine accidents each year.

To counter this, the health department will roll out an ambitious year-long plan to screen and test the country’s 600 000 mine workers for TB.

Mametja was speaking to journalists at a workshop held in Johannesburg this week by the Stop TB Partnership, a global alliance that includes the World Health Organisation, governments, research organisations, private sector parties and NGOs.

TB ‘ripple’ effect a threat
The rate of TB infection in South African mines — in particular gold mines — is among the highest in the world. The national incidence of TB is around 900 per 100 0000 individuals, and the rate in gold mines is as high as 3 000 per 100 000.

Mametja said the country has a major problem on its hands because of the “ripple effect” that undiagnosed and untreated TB can have on communities.

A single TB case in a mine setting can affect 10 to 15 people. This can have serious implications on community health and on the functioning of the mines, as highly skilled workers drop out of the work force.

Because of the scale of the testing required, the state would need to form partnerships with the private sector, as it had for the HCT campaign. Government would also work closely with mines, many of which offer in-house health services to their employees, to roll out the testing.

Mametja brushed off concerns that the drive to identify TB patients would cause a sudden influx of TB patients into the health system.

He said doing nothing was already overwhelming the system because diagnosing patients later often meant that they developed more complicated cases of TB that are more costly to treat.

“The system is already paying the price,” he said.

SADC makes a stand
Nine SADC countries, including South Africa, Lesotho and Botswana, have formally declared tuberculosis to be an emergency.

But their response to the TB epidemic will be stymied by the cancellation of the 11th round of funding from the Global Fund to Fight Aids, Tuberculosis and Malaria.

Because of the global recession, many donor countries failed to make good on their pledges to the fund, leaving a $1.7-billion shortfall in needed funding, which may result in the loss of 1.7-million lives.

Regional leaders are committing to a stricter approach to diagnosing and treating cases of TB. In April, health ministers from the SADC countries will hold an extraordinary meeting to discuss regional measures to counteract the spread of the disease in the region. The migrant labour system, which sees thousands of workers cross regional borders each year, is one of the factors that leads to increased TB risk.

Dr Llang Maama-Maime, who heads up Lesotho’s National TB Programme, said a simple cross-border referral system for migrant workers who have HIV and TB could help patients continue with their treatment plans, even when they move, and so reduce infections. About 33 000 Lesothoans currently work in South African mines.

A workplace hazard
Tuberculosis rates in mines have exploded since the early 2000s, as silicosis and HIV multiplied the risk of TB for miners. Silicosis, an irreversible respiratory disease caused by exposure to silica dust, makes breathing difficult and dramatically increases one’s risk of contracting TB. Gold miners are particularly vulnerable to silicosis.

Dr Thuthula Balfour-Kaipa, head of the health department of the Chamber of Mines, called silicosis the “bane” of the mining industry. She said that miners operate at the nexus of several factors that increase the risk of both HIV and TB, including migration, silicosis exposure, and age.

Professor Jill Murray, head of pathology at the Institute for Occupational Health, called on mining companies to develop technology to reduce the levels of silica dust in mines. “Many countries have managed to engineer out dust,” she said. “Nobody’s saying we need to stop mining. We just need to put in place those controls.”

She also called on mine unions and management to draw more attention to the problem of TB within the mines and for the disease to be given the same kind of focus as the HIV/Aids epidemic.