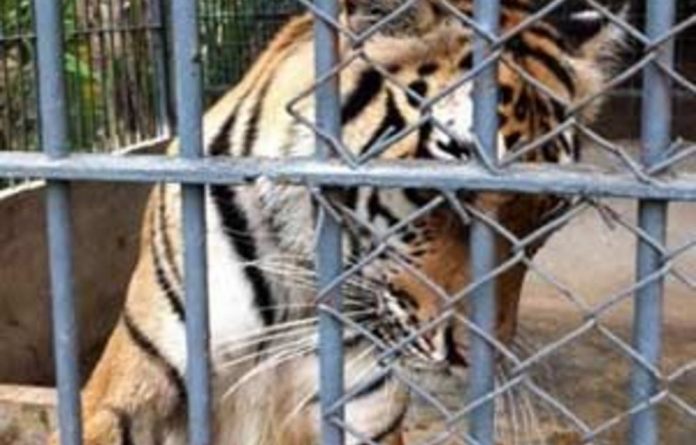 Thai authorities seized more than 200 live animals, including tigers and lions among other rare species, in a raid on an illegal wildlife supplier on Wednesday, police said.

“The owner cannot provide legal documents for the five tigers, so he was charged with violating the Wild Animal Preservation and Protection law,” Lieutenant Colonel Adtapon Sudsai of the Nature Crime Police said.

Police said they were verifying the owner’s claim that he had the necessary permits for the other animals.

If convicted, the suspect — named as 52-year-old Yutthasak Suthinan — faces up to four years in prison and a fine of $1 300, he said.

As well as the five tigers, police found 13 albino lions, two orangutans, two red pandas, four flamingos and two camels, along with many other species.

Illegal sale
The animal protection group Freeland Foundation, quoting Thai police, said the supplier was part of a global network importing protected animals from countries in Africa and elsewhere and breeding them for illegal sale.

The discovery at a compound in eastern Saraburi Province was based on evidence gathered following a raid last month on a house in Bangkok where officers caught four men in the act of chopping up a tiger.

“From our extended investigation into the butcher case, we suspected some animals could come from this place” in Saraburi, said the deputy commander of the Nature Crime Police, Colonel Kiattipong Khawsamang.

Elephant, zebra, wildebeest and lion remains were found last month at the Bangkok home, as well as meat kept in a refrigerator that police and wildlife activists said could have been destined for human consumption.

Thailand, a hub of international smuggling, is one of just 13 countries hosting fragile tiger populations. Worldwide, numbers are estimated to have fallen to only 3 200 tigers from approximately 100 000 a century ago. — AFP

He’s apologised now, but my week was ruined when I had to delve into his past
Read more
Education