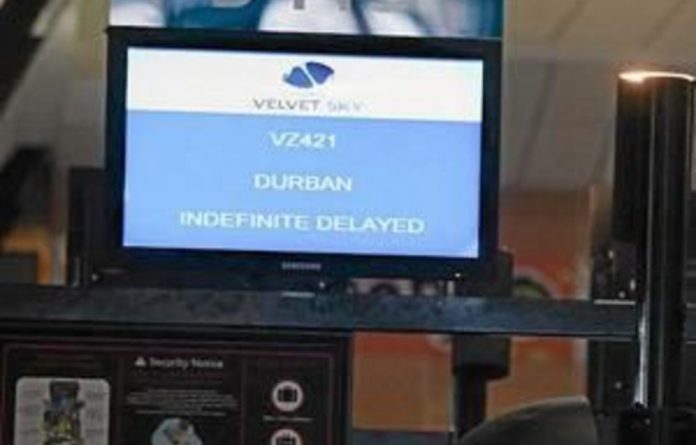 The possible rescue of grounded low-cost airline Velvet Sky has been clouded by the emergence of people associated with the Aurora mining debacle as key players in the period before the airline went down.

Velvet Sky has disclosed debts of nearly R100-million, but has applied to the KwaZulu-Natal High Court in Pietermaritzburg to be placed under supervision in terms of the business rescue provisions of the new Companies Act.

Now it has emerged in court papers that Suliman “Solly” Bhana served as a contact person for creditors and that Bashir Moosa and Tony Chammas were described respectively as the chief financial officer and a “financial manager” of Velvet Sky.

Solly Bhana and his son, Fazel, also emerged as “consultants” to Aurora Empowerment Systems during the company’s controversial management of the liquidated Pamodzi gold mines.

Since August last year Fazel Bhana has also been active as a consultant to Velvet Sky. Moosa, a business partner of the Bhanas, served as Aurora’s financial manager, while Chammas was also described as such.

The role of the Bhanas and their associates in the collapse of Aurora’s purported rescue of Pamodzi is the subject of an inquiry by the Master of High Court and a separate probe in terms of the Companies Act.

Evidence before the master’s hearing alleged that Fazel Bhana was party to drawing up a lawyer’s letter that falsely claimed that R20-million in funding from Aurora’s Malaysian partner had been deposited in the lawyer’s trust account.

Bhana told the Mail & Guardian that these allegations, made by former Aurora attorney Callie Smit, were “false, malicious and fabricated”.

Attorney Ahmed Amod, a shareholder in Velvet Sky, has represented some of the Aurora role players at the insolvency hearing.

This week Amod was implicated in alleged irregularities relating to a transaction between Aurora and listed empowerment company Labat, which was going to allow Aurora to reverse list.

Pamodzi joint liquidator Johan Engelbrecht issued a statement that the liquidator intended laying fraud charges based on the “apparent manipulation” of Amod’s trust account to back up the Labat transaction, which was later aborted.

Amod declined media comment, saying he would respond “in the appropriate forum”.

Lebanese-born Chammas was involved in the controversial collapse of a flower-exporting business, Intuitions Quality Flowers, into which the Development Bank of Southern Africa pumped about R35-million.

In late February Amod and Chammas represented Velvet Sky in attempts to reach a settlement with its biggest creditor, fuel supplier BP, according to an affidavit by BP’s legal adviser, Thulani Mciwa.

Solly Bhana told the M&G he had been engaged as a consultant by Velvet Sky chief executive Dhevan Pillay in December to assist the company with developing African routes.

He said he had helped the company to manage the liquidation application when BP went to court to recover some R29-million in unpaid fuel bills. Moosa was also apparently brought in to help stave off liquidation.

Velvet Sky handed a letter in at court at the first hearing of BP’s liquidation application in which one Miriam Ismail, claiming to represent a creditor called Floxizone, argued that Velvet Sky’s “potential earnings are increasing daily” and that the company should be allowed to trade its way out of trouble.

The M&G has established that Miriam Ismail is Moosa’s daughter.

The opening up of African routes — supposedly more lucrative than internal flights — formed the backbone of Velvet Sky’s submissions to the court this week, in support of the business rescue application by a friendly creditor, Lingam Peter.

However, the pedigree of the company’s consultants will raise doubts about the other crucial aspect of Velvet’s turnaround plan — the injection of new working capital.

Chief executive Pillay said in an affidavit that the company had concluded a “preliminary agreement” with a “world-renowned equity fund” for a capital injection of $50-million.

Pillay declined to name the white knight until the equity fund had “complied with the regulations of the Singapore stock exchange”, but he will have to disclose more details when the matter returns to court on April 10.

Aurora also held out promises of interest from a series of investors who, in the end, failed to materialise.

BP’s affidavit disclosed that another creditor, Menzies Aviation, which is owed R11-million, had complained that Velvet Sky had obtained additional credit under false pretences.

The company allegedly claimed to have made electronic deposits into Menzies’s account — and obtained further services on that basis — but in fact the deposits had been in the form of cheques, which later bounced. BP complained that the same modus operandi had been used to obtain fuel on credit.

And although Velvet Sky has promised passengers that flights will resume shortly, the M&G has established that the lease on its three main aircraft was terminated on February 27, due to the non-payment of insurance and leasing fees.

Fastjet flies just fine, but can it soar?