Conspiracy of silence over abortion 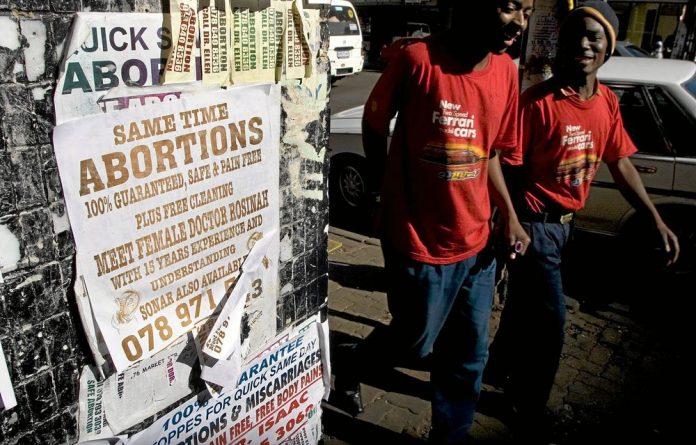 March 10 is Abortion Provider Appreciation day, a day that began in 1996 in memory of Dr David Gunn, the first abortion provider to be murdered (on that day in 1993) in the United States. It is a day to honour every provider who dedicates his or her life to help women and make reproductive choice possible. Without abortion providers, there is no access to abortion and no “choice”.

Within South Africa about 70% of first-trimester abortions are provided by nurses or midwives. They are undervalued and unsupported and clearly a class of provider under threat. Being an abortion provider is not what one talks about candidly when asked what one does.

Similarly, when faced with an unwanted pregnancy, one is faced with a deep conundrum that does not make for easy conversation. It is easier to talk about being HIV positive. I know of colleagues and friends who are open about their HIV status but who find talking about their unintended pregnancies difficult.

South Africa’s new national HIV strategy has no indicators to address fertility management, the quality of contraception or abortion care in relation to HIV as part of prevention programming. Society is deeply troubled by the reality that 50% of pregnancies are unplanned and that many choose to have an abortion.

In March 2011, in a response to parliamentary question, the health department revealed that the number of abortions in state facilities had declined dramatically between 2009 and 2010. Of the 545 525 abortions at state institutions since 2004, 84 478 were performed in 2009 and 38 321 in 2010. Access to abortion services is decreasing because the number of pregnancy clinics designated for termination has declined.

One of the overwhelming facts that led to changing South Africa’s abortion legislation in 1996 was a medical research study in 1994 that showed that 425 women — all black — died from illegal and unsafe abortions in that year. South Africa changed the law in 1996 to provide access to abortion. Death from unsafe abortions decreased by 90%, with only 34 deaths recorded in 2004. But, on December 19 2011, the health department loaded the full version of the maternal mortality report from 2005-2007 on to its website. The data is chilling.

High number of abortion-related deaths
“There is a 44% increase in death due to abortion, with about 598 women dying from abortion and pregnancy-related sepsis in the period 2005-2007. Eighty-nine percent of women who died from abortion and were tested for HIV were found to be seropositive … The figures for septic abortion in this chapter may be an underestimate, because there were another 58 deaths associated with abortion where Aids was considered to be the primary cause. According to health-department figures, choice of termination of pregnancy services may be in decline and this could be a factor in promoting unsafe abortion practices and an increase in septic abortion mortality. This needs further investigation.”

The data from 2008-2010 have not been released yet. Given the correlation between declining services and maternal mortality from illegal-abortion, there is cause for grave concern.

This all takes place within the bigger picture of a health system that has enormous challenges in terms of the availability of human resources, management expertise and quality of care. The health department has made significant and meaningful strides in response to the country’s HIV epidemic and in the provision of antiretroviral treatment.

The attention given to re-engineering its primary healthcare system and to implementing better stewardship through a national health insurance are excellent initiatives.

But what about women at the bottom of the ladder who choose to have an abortion? The silent wave of death from unsafe abortion caused by declining services needs to be brought back into focus.

Abortion by tablets the safer option
One solution is the adoption of medical abortion in which tablets bring on the abortion. Until recently, South Africa offered only surgical options for termination. The health department has the chance to support efforts to implement medical abortion guidelines, some of which have already been adopted in provinces.

Medical abortion might be easier for health workers to implement because it involves dispensing medication and the woman has the abortion in the privacy of her own home. There are initiatives to provide SMS messages of information and support during this time.

Make a difference on March 10. Find out who your local abortion provider is and send a box of chocolates or some flowers. Your mother, wife or partner, daughter, sister or aunt may have needed them in the past and will be sure to need them in the future. Also, report any illegal providers you find and tear down those adverts for backstreet abortions on lampposts.

Marion Stevens is a midwife and the coordinator for Women in Sexual and Reproductive Rights and Health (WISH) Associates.
For more information about maternal and child health, go to the department of health’s website: doh.gov.za

Being a child in South Africa is difficult, but there are programmes that help them to survive and thrive
Read more
Videos

Nomthandazo* thought her and her partner were happily expecting their first baby together. She was wrong.
Read more
Opinion

Pregnancy in South Africa is getting safer, but still not safe enough. Here’s what the health department says they’re doing about it.
Read more
Advertising