Vavi takes his toll on the ANC 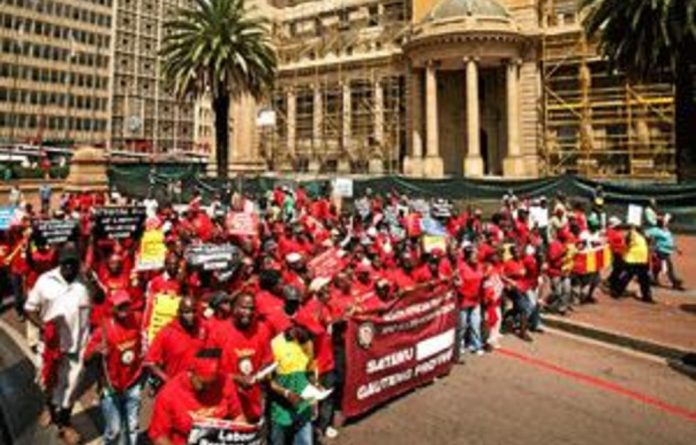 Cosatu general secretary Zwelinzima Vavi emerged as the biggest winner after this week’s massive strike, while the trade federation’s president, Sdumo Dlamini, expressed anger about the way it was conducted, indicating fault lines that are mainly rooted in the ANC’s Mangaung battles.

Cosatu’s decision to embark on a nationwide strike this week to protest against labour brokers and the e-tolling system has angered some leaders within both the federation and the ANC, who see the action as an attempt to embarrass President Jacob Zuma and his government.

The strike action was seen as a political show of strength by the Vavi-aligned group ahead of the federation’s national congress in June, the ANC policy conference, also in June, and the party’s crucial elective conference in December.

While Vavi continues to enjoy popular support among ordinary members of Cosatu he appears to have lost significant support within the federation’s central executive committee, largely because of his hardline stance towards the ANC and the government under Zuma.

Cosatu president not pleased with Jo’burg march
Dlamini, who led a march in Durban, was critical of the way the Johannesburg march was conducted, saying the decision to go on strike was a collective Cosatu decision, not a Vavi initiative. And he lambasted the ANC Youth League for using Cosatu platforms to fight factional battles in the ANC after Julius Malema addressed the Jo’burg marchers on Wednesday.

Malema stole the limelight as the marchers cheered: “Juju, juju, juju!” Although he was initially not on the list of speakers, Cosatu leaders were forced to afford him the opportunity to address the marchers, who impatiently chanted his name.

“People were desperate to get Julius to speak, in spite of the decision that the league’s secretary general would speak,” said an angry Dlamini.

“That was out of order. Cosatu is not going to be used. We are going to discuss the matter internally. We cannot allow ourselves to be divided by the youth league. It disrupted the march. It came there to boost its situation in the ANC.”

Cosatu’s top dogs no longer speaking
Once a close ally of Zuma, Vavi has now become one of the key critics of the ANC president, while Dlamini has said publicly that Zuma should be re-elected. This has led to a breakdown of trust between Vavi and Zuma, who are no longer on speaking terms, according to reliable sources within the alliance.

The M&G has been told about behind-the-scene attempts by a powerful section within the ANC’s national executive committee led by ANC secretary general Gwede Mantashe to isolate Vavi from the rest of Cosatu’s leadership .

Mantashe has denied that he was part of a group that wanted to control Cosatu.

“I left Cosatu in 2006,” he said. “When I was there, I did not want anyone to interfere. So I would not do that now. We are not expecting Cosatu to be silent. We want it to be radical but reasonable.”

Mantashe criticised leaders for putting the integrity of Nedlac — the chamber in which government, business and labour negotiate — in question by going on strike while negotiations over how best to deal with the issue of labour brokers were still taking place. He said Cosatu was involved in discussions about e-tolling with the Gauteng government.

Most of these leaders also serve as members of the South African Communist Party’s central committee, led by general secretary Blade Nzimande and Mantashe, who is the SACP chairperson. Under Nzimande’s leadership, the SACP has been widely criticised for its soft stance towards Zuma’s administration.

The Vavi contingent believes the ANC under Zuma has failed to implement the resolutions taken at Polokwane, including abolishing the labour brokering system and creating decent jobs in the country. The Vavi group is also pushing for radical policy change in the ANC and supports the ANC Youth League’s call to nationalise mines and other key sectors of the economy.

While SACP leaders, including Nzimande, joined Cosatu’s march, the party does not agree with Cosatu’s argument that the tolling system should be scrapped, saying tolls will affect only the wealthy.

Speaking to the M&G this week, Sadtu’s Ntola acknowledged a fight was taking place for the control of Cosatu because it was a significant factor within the alliance.
“There is a tendency that when people pass policy, they want to be supported,” said Ntola. “Cosatu is independent and should remain the instrument for fighting for the rights of workers.”