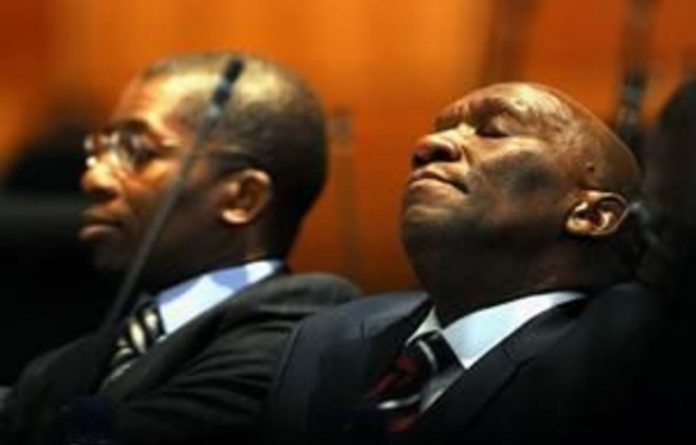 Suspended police commissioner Bheki Cele on Monday could not explain the coincidence that both buildings identified for police accommodation in Durban and Pretoria were owned by one man.

“I can’t explain the coincidence … the visits [by some SAPS officials] had taken place without me knowing,” Cele told the inquiry, sitting in Pretoria, into his conduct.

He was asked about the coincidence that property mogul Roux Shabangu owned both the Sanlam Middestad and Transnet buildings in Pretoria and Durban respectively.

When asked about the person who had to be held accountable when it came to compliance with tender processes, Cele said: “That would be me.”

He agreed with the inquiry’s chairperson Jake Moloi that it appeared as though Shabangu knew in advance about the police’s accommodation needs and that someone was keeping him informed.

Cele said he did not know the motive behind his former deputy and police procurement head Hamilton Hlela’s testimony that “a person” would call him to discuss new office space for police headquarters in Pretoria. According to Hlela, the only person who called after that was Shabangu.

Questionable work ethic
Cele previously insisted he relied on “experts” such as Hlela to advise him before signing any documents. This was after admitting he sometimes did not scrutinise documents presented to him and Hlela. He said he lost trust in Hlela due to his questionable work ethic.

Public protector Thuli Madonsela found the building leases had been concluded in an unlawful and improper way. Shabangu is challenging the matter in court.

Madonsela, whose report was being used as evidence at the hearing, was instrumental in President Jacob Zuma appointing the board of inquiry late last year.

Last week, board members had to try more than once to elicit clear answers from Cele, accusing him of being evasive in answering questions.

“It leaves a terrible impression on this board,” said Moloi on Thursday.

Cele’s defence team made it clear he would deny any wrongdoing outright.

In a brief appearance before the board in Pretoria, SAPS chief financial officer Lieutenant General Stephan Schutte said under normal circumstances funds for police projects were raised before committing to a transaction.

He said even re-prioritisation normally preceded signing of a deal.

According to a June 2010 memo by Schutte: “As the national police commissioner approved the lease already, funds have to be made available which means something else has to be foregone and re-prioritised”.

During cross-examination last week Cele admitted approving funding for the R1.1-million Durban building lease, knowing there was no money for the project in police coffers.

“As a matter of fact, there were no funds available. But I also knew there could be re-prioritisation when needed,” said Cele.

He however could not say which areas were re-prioritised to pay the lease for the building, claiming he could not remember.

Expiring lease
Cele told the inquiry there was a pressing need for police accommodation because the lease for the Servamus building in Durban, worth about R1-million a month, was about to expire.

At the time, what mattered was the availability of the building, rather than funding, he said.

The inquiry is trying to establish whether Cele acted corruptly, dishonestly or with an undeclared conflict of interest in relation to two police leases, signed with Shabangu; his fitness to hold office and his capacity to efficiently execute his duties.