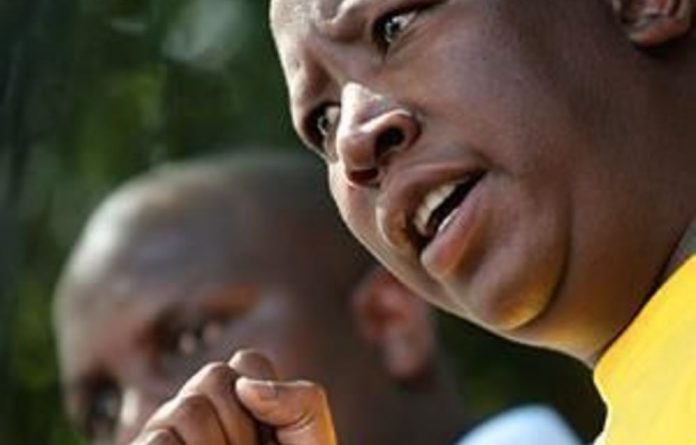 Suspended ANC Youth League leader Julius Malema apologised to leaders of the ANC on the SABC Asikhulume talk show on Sunday night, in an hour-long interview during which he also called for the “democracy-destroying” media to be regulated.

“I want to also apologise to the leadership of the African National Congress for anything that they think I have done wrong,” he told presenter Vuyo Mvoko.

Malema was expelled from the ANC in February for bringing the party into disrepute and sowing division in its ranks.

“I did not do it deliberately. I was making a contribution. I thought it was strengthening the movement as required by the constitution of the ANC Youth League to support the movement,” he said during the discussion.

Malema also called for the regulation of the media, “because this media will destroy the democracy,” he told Mvoko.

‘The media didn’t make me’
“They have no respect for anyone except the madam [Democratic Alliance leader Helen Zille].”

When asked if the media helped to create his profile he said: “I was never produced by the media.”

“I grew up in the African National Congress. I am not a product of editorial comments. I am a product of the struggles of the poor.”

He said the press ombudsman had failed dismally.

In 2007 the ANC complained about media coverage and made proposals at its national conference to set up a Media Appeals Tribunal to replace the existing self-regulation of the media.

“We need a body which has got teeth, which will bite,” Malema said.

Turning to the possibility of a criminal investigation of his business interests Malema said: “I have no fear of anything, but I am politically conscious and know very well that state power can be manipulated to produce any outcome.” — Sapa