Over 100 dead in Bangladesh ferry disaster 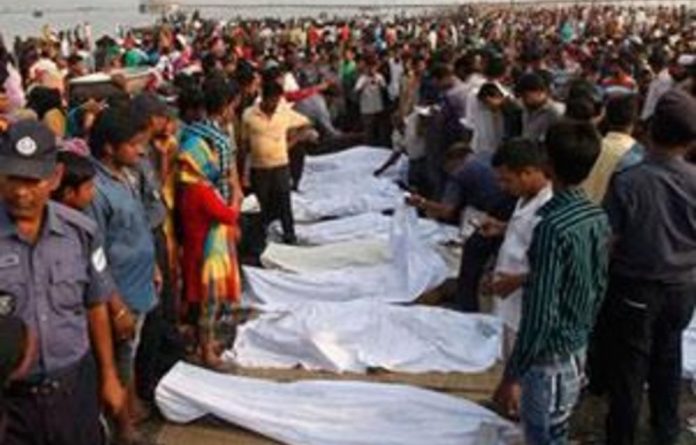 The death toll in this week’s ferry disaster rose to 116 on Thursday when villagers found four more bodies floating in the water, authorities said.

The decomposing bodies surfaced near the scene of the accident hours after the double-deck ferry was salvaged and the rescue operation was called off, local police chief Mohammad Shahabuddin Khan said. Rescuers recovered 112 bodies from inside the sunken boat on Tuesday and Wednesday.

The ferry carrying about 200 people collided with a cargo boat and sank early on Tuesday, sending scores of people into the Meghna River, just south of Dhaka. Khan said about 35 survivors were plucked from the water, while local media reported that another 40 managed to swim to shore.

Hundreds of anxious people, many of them weeping, gathered near the scene of the accident to look for their loved ones. Some were angry, saying they blamed local authorities for the slow pace of the rescue operation.

Parul, who goes by one name, said she had been waiting at the shore since Tuesday night for news of her newly married brother, who was returning on the ferry with 16 others from his wedding party.

‘Bring my brother back’
She said only four of the 17 had apparently survived. Two bodies had been recovered but the bridegroom and others were still missing.

“Bring my brother back. Give them all back,” Parul wailed as she beat her chest. “I want to see their faces. Please take me to them.”

Rescue workers and divers called off the search late Wednesday after raising the wreckage, but police planned to stay in the area.

“There are no more bodies inside the ferry but police will remain deployed to check if there are any more bodies around,” Khan said.

Ferry accidents are common in Bangladesh, a low-lying delta nation crisscrossed by more than 230 rivers. They are often blamed on overcrowding, faulty vessels and lax rules. In 2009, about 150 people died in three ferry accidents.

Khan could not specify how many people were still missing. Many passengers buy their tickets on board, and ferry operators rarely keep accurate passenger lists.

The MV Shariatpur-1 was traveling to Dhaka from Shariatpur district to the southwest. The accident occurred in Munshiganj district, about 32km south of Dhaka. — Sapa-AP

More than 17-million children around the world are involved in domestic labour. The recent death of 17-year-old Salome Zacharia in Tanzania highlights their plight
Read more
Africa

By pushing their usually valid complaints onto the streets and the courts, opposition leaders deny governments the popular goodwill and international credibility they need to govern effectively
Read more
Education

Access to cellphones is not an end in itself. Rather, it is a way to level the playing field not only through knowledge, but also through connection
Read more
World

Facial hair of sunset tones is now the go-to look for older men wanting to take off the years, with an array of henna options available
Read more
Sport