A nation born must not be allowed to die 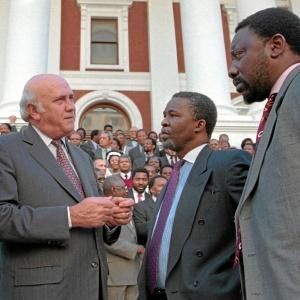 At the end of 1991 the National Party (NP), of which I was then leader, lost a key by-election in Virginia to the Conservative Party (CP). The CP crowed that we had also lost our mandate to continue the constitutional negotiations with the ANC and other parties and demanded a whites-only election.

Their claims were greatly amplified on February 19 1992 when the NP lost another key by-election — in Potchefstroom. Its majority of 2000 in the 1989 election was wiped out and replaced by a CP majority of 2140 votes. The CP’s claim that we had lost our mandate to negotiate seemed to have been vindicated.

We had promised that we would hold a referendum to enable the white electorate to express its views on the negotiations. Our defeat in Potchefstroom convinced me to do so as soon as possible.

Accordingly, I announced my decision to hold a referendum to the NP leadership and caucus the next morning. I did not put the question to a vote, which I might well have lost, but decided to use my powers as party leader to decide the issue myself.

The question we put to the electorate on March 17 1992 was: “Do you support the continuation of the reform process that the state president started on February 2 1990 and which is aimed at a new Constitution through negotiations?”

In the run-up to the referendum, I told audiences that I was not asking for a blank cheque. I said that we had already reached broad consensus on a number of key points regarding the future constitution. These included a multiparty democratic system, a Parliament comprising an upper and lower house, the need for a Bill of Rights, the separation of powers, the independence of the judiciary, proportional representation, a strong regional basis for the future government, the maintenance of language and cultural rights and community-based education for those who wanted it.

I said that there were a number of issues on which we were still seeking consensus. They included the prevention of domination and the abuse of power, effective protection of minorities, the protection of property rights, career security for public servants, a market-based, free-enterprise economy, constitutional protection for regional and municipal government and the dispersal of the powers that were then concentrated in the hands of the state president.

I believe that it was on March 17 1992 that the great majority of white South Africans finally turned their backs on 350 years of white domination. In my victory speech on March 18 I said that they had finally closed the book on apartheid: “The white electorate has reached out, through this landslide win for the ‘yes’ vote, to all our compatriots, to all other South Africans and the message of this referendum is: today, in a certain sense, is the real birthday of the new South African nation.”

The mandate that we received enabled us to proceed with the negotiations and to nail down virtually all the goals that I listed in my pre-referendum speeches.

Now, ironically, almost exactly 20 years later, many of the funda-mental provisions of the Constitution we subsequently negotiated and adopted are under threat.

On March 5 this year the ANC released policy discussion papers claiming that the “first transition” had served its purpose and should now make way for a “second transition”. The discussion papers proposed that the present provincial system be amended and the property rights be reviewed to facilitate land reform.

This followed the announcement the previous week of the government’s plan to “review” the judgments of the Constitutional Court, accompanied by dark rumblings from the president regarding the need to review its powers. It coincided with the South African Languages Bill, which would -effectively strip Afrikaans and seven black indigenous languages of their official status.

Our failure to make substantial progress against poverty, inequality and unemployment cannot be ascribed to any shortcoming in the Constitution, but rather to inappropriate policies. The Constitution is under pressure not because it is standing in the way of transformation, but because it is limiting the power of the executive and the legislature to do as they please.

The time has come for all our communities — not just white South Africans, as was the case 20 years ago — to stand up for the values and rights on which our new society has been based. Their response will, in a very real sense, determine the sustainability of the new South African nation that I believed was born on March 17 1992.