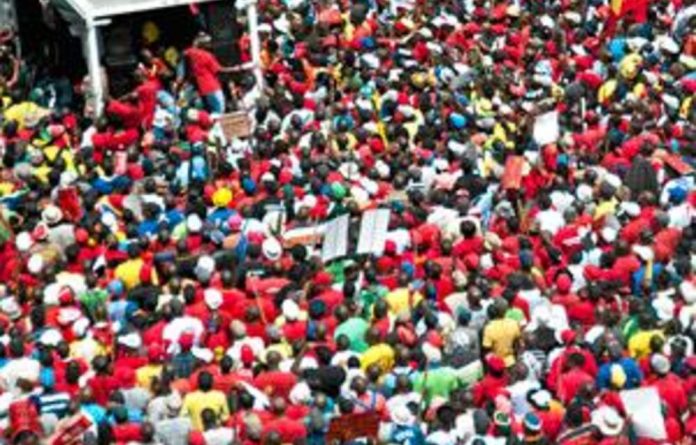 Feuding between the ANC Youth League and Cosatu president Sdumo Dlamini intensified this week as the league accused him of having broken ranks with “progressive working-class struggles to appease the interest of the ruling class” after he objected to league president Julius Malema being given a platform at the Cosatu march in Johannesburg last week.

In a letter written by league secretary general Sindiso Magaqa to Cosatu general secretary Zwelinzima Vavi the league has demanded that the federation apologise after Dlamini publicly accused the organisation and Malema of hijacking Cosatu’s march to settle internal political scores in the ANC.

Cosatu’s march against labour brokers and e-tolling, which attracted tens of thousands of people across South Africa, has divided the alliance. Some leaders in Cosatu and the ANC said the protest action was intended to embarrass President Jacob Zuma’s over his leadership style ahead of the ANC elective conference in Mangaung in December.

Vavi is believed to be leading a faction in Cosatu that wants to remove Zuma as president, whereas Dlamini’s faction prefers his re-election.

In a letter to Vavi, Magaqa wrote: “We were shocked to see a statement attributed to the president of Cosatu, comrade Sdumo Dlamini, that the ANC Youth League disrupted a peaceful march by workers. The insinuation in the statement is that we as the ANCYL, particularly the president of the ANCYL [Malema], want to garner support or seek the sympathy of the workers through the march for reasons unrelated to the march.

“We took a decision to participate in the march and support the cause as raised by Cosatu as we did in previous years [and] not for narrow political aspirations and purpose, as insinuated and suggested by the president of Cosatu,” said Magaqa.

“We request that the statements attributed to Dlamini be retracted because it sends a wrong message to the public. We consider Cosatu a reliable ally in the struggle to attain all aspirations of the Freedom Charter and believe that no amount of ideological degeneration will result in utterances and insinuations attributed to comrade Dlamini. If comrade Dlamini wants to break ranks with progressive working-class struggles to appease the interests of the ruling class and its representatives, he should do so openly and not use the ANC Youth League as a scapegoat. Many others, who used to be the most militant and radical working-class heroes, have sold out before, so he will not be the first and last to do so,” said Magaqa.

Approached for comment this week, both Vavi and Dlamini said they had not seen the league’s letter.

Dlamini told the Mail & Guardian that even if the youth league did send the letter, it would have no impact because he did not report to Vavi.

“I am the president. I report to the central executive committee. If they [the youth league] send it to Vavi, they are giving him a difficult task. They cannot get any help.”

Dlamini remains unapologetic
Dlamini insisted that he stood by his remarks about Malema and rejected suggestions by the youth league that he had attacked its president because he supported the Zuma faction in the ANC.

“It is nonsense to suggest that I support Zuma. I never spoke about Zuma when I said Cosatu was not supposed to allow Malema to speak.”

Dlamini said he was insulted by Magaqa’s remarks at a rally in KwaZulu-Natal this week, calling him a liar.

“Julius called me and I explained to him Cosatu’s position on the matter,” Dlamini said. “He never complained. I’m insulted by what Magaqa said. He told people that I was a liar and that he could not understand why Cosatu choose to elect me.”

When asked why Cosatu gave a platform to Zuma [then ANC deputy president] when he was barred by the ANC from speaking in public because of his troubles with the law between 2005 and 2007, he said: “We are not faced with a similar situation. There was no disciplinary action against Zuma [in the ANC then]. There was a great sympathy for him in Cosatu. I am not saying there is no sympathy for Malema. We remain vindicated that the state apparatus was abused to deal with Zuma.”