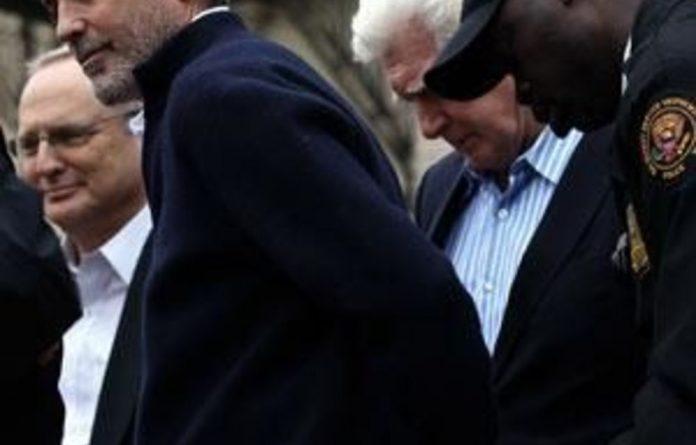 Hollywood movie star George Clooney was arrested at Sudan’s embassy in Washington on Friday during a protest against an escalating emergency as the country blocks humanitarian aid from reaching a volatile border region where hundreds of thousands of people are short of food.

Clooney, his father Nick and other Sudan activists ignored three police warnings to leave the embassy grounds and were led away to a Secret Service van in handcuffs, a Reuters journalist covering the demonstration said.

“We need humanitarian aid to be allowed into the Sudan before it becomes the worst humanitarian crisis in the world,” Clooney told reporters just before his arrest.

“The second thing we are here to ask is for the government in Khartoum to stop randomly killing its own innocent men, women and children. Stop raping them and stop starving them. That’s all we ask.”

Clooney, who on Wednesday was a guest at the White House banquet in honour of British Prime Minister David Cameron, and several others were expected to post bail and walk free later on Friday, a spokesperson for the protest organisers said.

“We gave them each $50 for bail,” said Matt Brown of the Enough Project, an activist group which helped to organise the protest as part of a “day of action” to highlight the situation in Sudan’s volatile South Kordofan and Blue Nile provinces.

Activists have drawn parallels between the current crisis and the violence almost a decade ago in the western region of Darfur, where Khartoum sparked international condemnation by violently suppressing a rebellion in a conflict that the United Nations estimates killed some 300 000 people.

US concern
The United States has voiced serious concerns about the deteriorating conditions in the border region, where Sudanese troops are fighting rebels aligned with its newly-independent neighbour South Sudan.

Clooney, who recently visited the area, told a Senate hearing this week that Sudan’s forces were launching repeated attacks on unarmed civilians and preventing aid from reaching a region where US officials say as many as 250 000 people face severe food shortages.

Clooney, who has long been a prominent celebrity activist critical of the Khartoum government, had been widely expected to provoke police into arresting him.

Tom Andrews, president of United to End Genocide, another group involved in the protest, said it was time for the US government to turn up the heat on Khartoum to stop the violence and allow humanitarian access.

“It is unacceptable and inexcusable that Sudan’s President Omar al-Bashir — an international criminal wanted for war crimes and genocide — is getting away with bombing, starving and displacing hundreds of thousands of innocent men, women and children in Sudan’s Nuba Mountains and Blue Nile State,” Andrews, who was also arrested, said in a statement.

The Sudan Embassy in Washington could not immediately be reached for comment. — Reuters