No need to be Ruud: Beating the Buccaneer blues 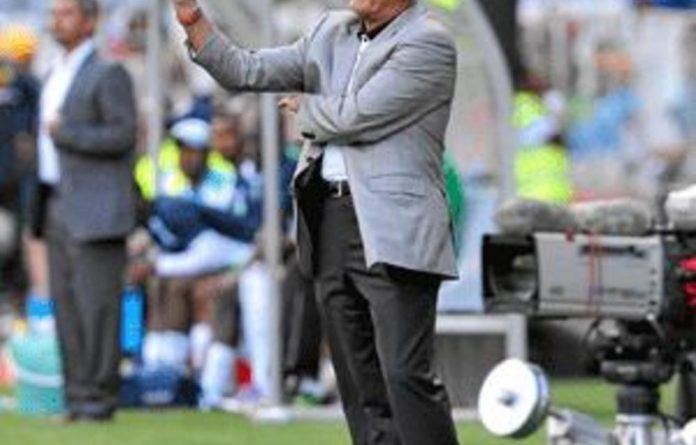 Ruud Krol is about as sentimental as a fridge but he will watch Saturday’s Soweto derby with a pang of nostalgia. The treble-winning Orlando Pirates team he built are not happy people at present and the Dutchman still believes his adventure at Bucs ended too soon. “I could have built it further, to a different level,” he said this week. “But I did not get the time.”

Not that Krol is wallowing in self-pity. Though reluctant to comment on his immediate future, he is likely to take the Platinum Stars job in coming days, replacing the embattled Owen da Gama.

Nor can the Sea Robbers’s current malaise be accurately described as a crisis, despite their gruesome 3-0 drubbing by relegation battlers Santos on Wednesday. Under the now “suspended” Julio Leal, Pirates have already gathered two cups this season and remain credible contenders for the league title.

And the aggravating sight of Vladimir Vermezovic’s Amakhosi prancing on the Soccer City turf on Saturday should clear the fog of hesitancy that haunted Pirates at Athlone. Even the hapless caretaker coach, Augusto Palacios, a bamboozled escapee from the early Nineties, could get a grip on proceedings.

But a much-needed derby win would not solve the problem of Bucs’s long-term stewardship. Zambia’s French wizard, Herve Renard, is understandably less than thrilled by the prospect of a Premier Soccer League (PSL) gig, what with a World Cup beckoning for Chipolopolo. It is easy enough for the Gauteng giants to recruit washed-up carpetbaggers provided the severance clause is hefty enough, but proven young coaches tend to have bigger fish to fry.

And it strikes Krol as odd that Bucs boss Irvin Khoza’s primary reason for deleting Leal from his desktop this week was the Brazilian’s early failure in the African Champions League, given that Krol himself is well qualified to succeed north of the Limpopo. Krol captured the continental title with Egyptian giants Zamalek in 1996. “I had plenty of experience of African competition when I arrived,” he said. “But I did not have experience of the PSL, so it took me time to adjust.”

For some PSL club bosses, firing coaches is a pleasurable pastime akin to popping bubble wrap. But Khoza drew little satisfaction from this week’s events. He had gambled heavily on Leal, hoping to introduce a dash of Brazilian fluidity that never arrived. By all accounts, Leal was a much worse man manager than his flamboyant presence would suggest.

With Krol it was the other way around. He is not a charmer; he starts his answer to most questions with “no”. But he commands respect, notably by imposing his will on any unwitting prima donnas who cross his path — Teko Modise was no match for him — and by showing loyalty to effective and disciplined performers.

Many onlookers were puzzled that Khoza took a chance on hiring Leal, having just tasted the delayed gratification of coaching continuity. While being preoccupied with his 2010 World Cup role, Khoza allowed Krol three uninterrupted seasons to build a cohesive, disciplined generation of Sea Robbers, and his patience was rewarded with a spectacular treble in the third campaign. It was a textbook lesson in the value of inaction.

Boring style yielded results
But the football Krol delivered rarely approached the heady heights of exuberance and flair that the Ghost craves. His Buccaneers did not crush many opponents; they usually edged them out by a goal or two. Fans muttered longingly about the tenure of Serbian Kosta “Bill Clinton” Papic, under whom Bucs played beautifully and lost often.

The 2011 treble campaign was aided by occasional doses of good fortune, but it takes an organised, motivated side to capitalise on any blessings the diski gods may bestow. “Title or no title — and winning a title is much more difficult than it looks — my task was to build a competitive team,” said Krol.

His trump card was consistency of selection and formation, which translated into consistency of performance. And he is more befuddled by the overhauling of his all-conquering side by Leal than by his own exit.

“I was quite surprised to see only four players from our championship-winning team on the pitch recently against Platinum Stars,” he said.

“Of course, you have to bring in replacements for injured players. But if you look through the world, never will you see a team that wins a title and then changes seven of the players in the very next season.”

Krol plans to stick around in South Africa this year, whether or not he is given the Platinum Stars assignment. His daughter is finishing her schooling and he gets a kick out of Johannesburg. “I like the people of this country and I believe in the local game. It has lots of potential to improve. If I can contribute one stone to that building process, I will be happy.”

He has already done that.