Solar company left out in the cold 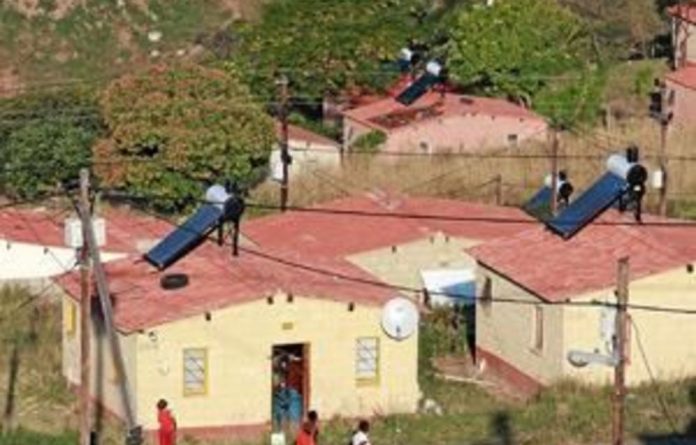 Cutbacks in Eskom’s solar heating programme have torpedoed a major solar geyser manufacturing operation that would have produced 30 000 units a year and provided permanent jobs for about 100 workers.

Matla partnered with a Taiwanese consortium and a source, who had worked closely with the project but asked not to be named, said he understood that the partners had fallen out, leading to the company importing the product from Taiwan. The company denied this.

Two years after the 7 500m2 factory opened amid much local fanfare, a local businessman, who had been inside the building, said almost no production was taking place.

“When the company was launched, we did promise those jobs because we thought the factory would operate fully. But we were only able to assemble the panels, not the heater itself.”

Sisulu said Eskom had introduced quotas last year after exhausting the R1-billion in funding it received from the National Energy Regulator of South Africa (Nersa) for rebates under the programme.

The revised system meant new companies could claim only for a quota of 30 low-pressure systems a month. Thirty staff were retrenched, including four who had been sent to Taiwan for training.

Matla managing director Chia-Chao Wu denied there had been a disagreement between the partners. He said the company provided services to three Eastern Cape municipalities and was buying locally manufactured units.

He also said the factory had been forced to close because it could no longer sustain itself on the number of heating units Eskom could procure or install as part of its solar water-heater project.

“No factory can sustain itself on an order book of 30 units a month. Not even the increased order, from December 2011, to 100 units per month is enough. Matla needs to produce a minimum of 1 000 units per month to break even and 2 000 to be profitable.”

Wu said Matla saw an opening in the renewable-energy market after Energy Minister Dipuo Peters had declared that South Africa should aim to install one million solar water-heating units by 2014.

“Eskom rebates are currently the only source of funding for low-pressure solar water heaters, the ones that go into low-cost housing. The success of the project and that of the companies involved in the value chain relies almost entirely on the Eskom rebates.”

The Mail & Guardian asked to see a copy of the agreement between Matla and the corporation and asked how much of the loan the company had repaid. Both requests were refused on the grounds that the deal was confidential.

Sisulu said: “I can assure you there are no irregularities in the agreement we made with the corporation. We as directors took out a loan from them, which we have been servicing every month since last October.”

Corporation chief executive Sithembele Mase confirmed lending the company R10-million on the strength of the existence of a manufacturing operation.

“We approved R20-million in two phases, one being the working capital portion of the business in respect of the establishment of the solar geyser manufacturing plant, and phase two for the implementation of the project in respect of the installation or roll-out of solar water geyser systems across the province.

“To date, only the first tranche of R10-million has been disbursed. The remaining funds are to be disbursed once certain conditions are met.”

Eskom spokesperson Hillary Joffe said that, as part of the tariff determination, Nersa had given Eskom R1-billion a year over three years, from 2010 to 2013.

“The huge success of the programme during 2010-2011 meant, however, that we started to reach the limits of this funding.

“In January 2010, the solar water-heating rebate was increased to stimulate the uptake of the solar system in the market. However, due to funding constraints in 2011, a quota system of 30 units per month was implemented on low-pressure systems.” With additional funding, this had been increased to 100 a month in December, lasting until March, Joffe said.