Syria struck by deadly blasts ahead of UN mission 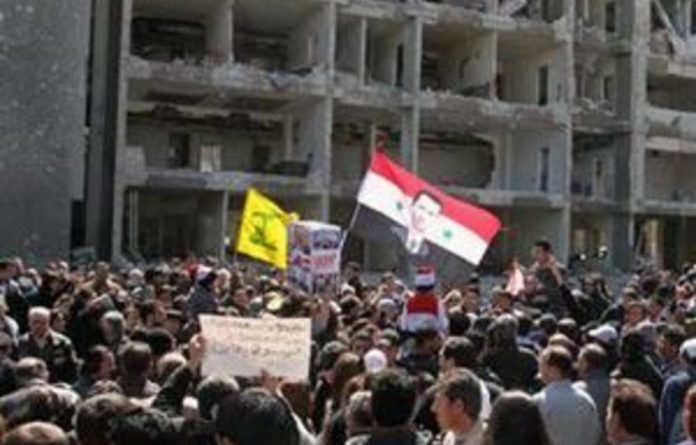 Syria was hit by the third lethal car bombing of the weekend on Sunday as UN teams readied for a government-led humanitarian mission and to work to launch a monitoring operation to end a year of bloodshed.

The Syrian Observatory for Human Rights, in a statement, said the latest blast targeted political security offices in the northern city of Aleppo, killing three civilians and wounding more than 25 others.

State media, charging that such attacks are aimed at sabotaging efforts to find a political solution to Syria’s crisis, said the bomb exploded near residential buildings and a post office.

It left dead and wounded, causing heavy damage to apartment buildings, state television reported, without giving a precise toll for the latest attack in Aleppo, the target of car bombings on February 10 that killed 28 people.

On Saturday, twin car bombings killed 27 people and wounded 140 others in the heart of Syria’s capital, mostly civilians, the interior ministry said, blaming “terrorists” for the attacks near police and air force headquarters.

The capital and Aleppo, Syria’s second largest city, are both seen as having high levels of support for President Bashar al-Assad, and have been relatively unscathed by the brutal crackdown on anti-regime protests.

“Yesterday’s explosions were carried out by terrorists supported by foreign powers which finance and arm them,” charged Al-Baath newspaper, mouthpiece of Assad’s ruling party of the same name.

“The two attacks … aim to disrupt Annan’s mission and to foil international efforts to find a political solution to the crisis,” it said, referring to UN-Arab League peace envoy Kofi Annan.

Lethal bombings
Ath-Thawra, another official daily, pointed the finger at Qatar and Saudi Arabia which have called for rebels fighting the Assad regime to be armed.

A rally and prayers were held on Sunday at the site of the biggest explosion, in the Al-Qasaa district that is home to many members of Syria’s Christian minority.

State television, which said victims were being buried on Sunday, has repeatedly broadcast how the Al-Qasaa blast totally gutted the facade of a multi-storey building, wrecked family homes and spattered pavements with blood.

Opposition activists accused the regime, as in past lethal bombings, of having stage-managed the attacks.

Technical experts from the UN and the Organisation of Islamic Cooperation, meanwhile, were to take part in a mission to assess the humanitarian impact of the regime’s crackdown on protests since March 2011.

UN humanitarian chief Valerie Amos, who held talks in Damascus this month, said they would at the weekend join the assessment mission to Daraa, Homs, Hama, Tartus, Latakia, Aleppo, Deir Ezzor and rural zones around Damascus.

The UN estimates more than 30 000 Syrians have fled to neighbouring states and another 200 000 have been displaced within the country by the past 12 months of deadly violence.

Activists say the year-long conflict has cost more than 9 100 lives.

International Committee of the Red Cross chief Jakob Kellenberger is to hold talks with Russian Foreign Minister Sergei Lavrov in Moscow on Monday on the “extremely difficult” humanitarian situation in Syria’s protest hubs.

Evacuations
“A daily ceasefire of at least two hours is imperative to allow the evacuation of the wounded,” he said ahead of the mission to Moscow, an ally of Damascus which is seen as having influence on the Syrian leadership.

Former UN chief Annan, who met Assad in Damascus last weekend, has ordered a team of experts to Syria to discuss a possible ceasefire and international monitoring mission, his spokesperson said.

Annan’s team will head to Damascus from New York and Geneva on Monday.

On the ground, security forces mounted operations on Sunday in Aleppo, north-western Idlib, the east’s Deir Ezzor region and Daraa in the south, birthplace of the anti-Assad revolt, and Al-Raqqa in the northeast, activists said.

In the Aleppo region, Atareb town was shelled for the 33rd straight day, said Mohammed al-Halabi.

The Observatory said four soldiers were killed in clashes with rebels in the same region bordering Turkey, while security forces killed a civilian in Daraa, where deserters blew up a bridge near Khorbet al-Ghazaleh to cut a supply route.

It also reported that security forces beat up and detained opposition figure Mohammed Sayyed Rassas, a National Coordination Committee for Democratic Change leader, which is normally tolerated, and several youths at a Damascus protest.

On Saturday, two “terrorists” were killed as a booby-trapped car they were driving blew up in a Palestinian refugee camp in a suburb of Damascus, Syria’s state news agency SANA reported. — AFP