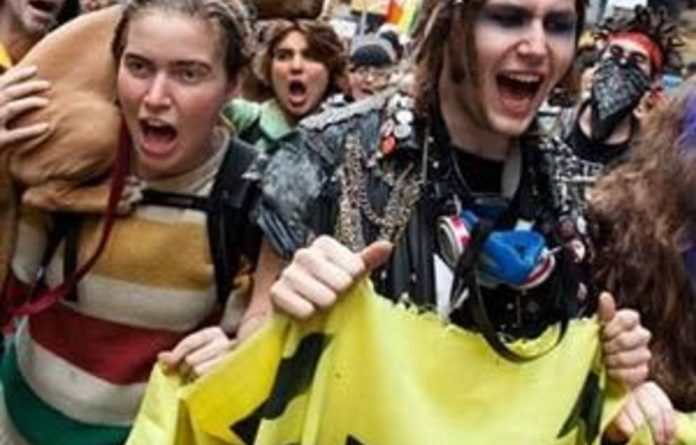 New York police arrested protesters celebrating the six-month anniversary of Occupy Wall Street by massing on a square near the stock exchange over the weekend.

Chaotic scenes unfolded at Zuccotti Park in Manhattan’s financial district overnight Saturday and Sunday when officers broke up the peaceful rally by about 600 people at the site where the Occupy movement started last September.

There were no immediate official figures on the total number of arrests but Agence France-Presse reporters saw more than a dozen.

Three women, hurt in the clashes, could be seen in an ambulance and several other ambulances were deployed to the site, their sirens joining the wailing of police squad cars that raced down the neighbourhood’s narrow streets.

By the early hours of Sunday, demonstrators had dispersed from the area but a heavy police presence remained and Zuccotti Park, which had earlier been filled with protesters singing, chanting and beating drums, was eerily empty and surrounded by metal barricades.

The rally, which began in the evening, grew bigger when reinforcements arrived, saying they were ready to stay on the square into the night. Shortly before midnight, protesters erected a makeshift tent of cardboard and tarpaulin in contravention of rules banning shelters in the park.

Rough treatment
As soon as police moved in, tempers rose, although there was little violence from protesters. Several people could be seen being roughly pushed and subdued by officers.

Witnesses told AFP that one woman suffered a seizure after being put into handcuffs but was not given proper medical attention for several minutes.

“It was a good 10 or 15 minutes before they got an ambulance. I thought, oh no, is this the moment when this woman is going to die right there?” said angry demonstrator, Leslie Kauffman (47).

Many at the rally accused police of being aggressive even when unprovoked.

“Just being in proximity to a police [officer] is all you need to be arrested,” artist Molly Crabapple said.

Lou Posner, an observer with the National Lawyers Guild, said he thought the number of arrested could be between 30 and 50, although he had no firm figures.

He called the raid a sign of “the toxic culture of our repressive police state that any public expression beyond a Boy Scout march is not allowed”.

Before rallying at Zuccotti Park, protesters had marched on nearby Wall Street, resulting in another unspecified number of arrests, police said.

Regaining momentum
Zuccotti Park was the focal point of the movement when it sprang up in September last year but a tent camp maintained there by the mix of anti-capitalists, anarchists and people simply disillusioned with their economic future was evicted after two months.

Since the eviction, the movement, which at one point spawned similar tent camps in cities across the US, has struggled to rally large numbers or find new ways to make its presence felt. However with warmer spring weather arriving, expectations are that Occupy leaders will try to regain their momentum.

One of the activists taking part in Saturday’s gathering at Zuccotti said he hoped the park would again become home for protesters.

“They’re hoping we’ll all go away because it’s cold,” said Rob (28) declining to give his last name. “The park’s become the symbol both for us and for them. We are going to take it back.”

Protesters seemed invigorated by their relatively large numbers compared to the small turnouts during street demonstrations over the winter. Some of their old chants were repeated and the former tent camp’s famous — to some, notorious — noisy drum circle was up and running.

“New York is a people’s town. Occupy, shut it down!” the crowd chanted, dancing at the same time.

Moore, the director of films including Capitalism: a Love Story and Fahrenheit: 9/11, said he was “excited to see what will happen.”

“We’ve never had anything like this in this country where we take on economic issues like this,” he said. — AFP