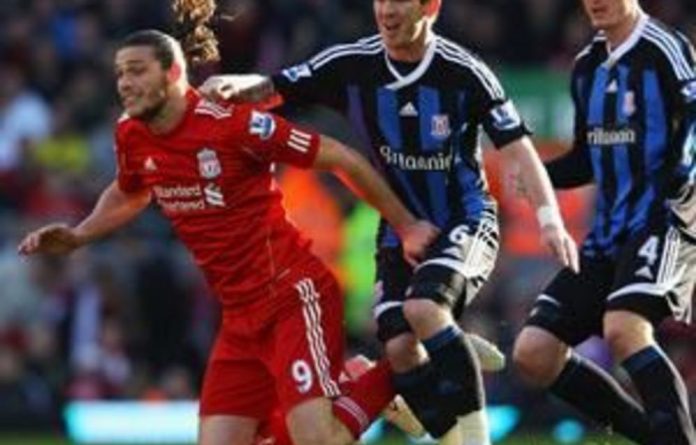 Liverpool booked their second Wembley appearance of the season by beating Stoke 2-1 in the FA Cup quarter-finals at Anfield on Sunday.

Stewart Downing’s second half strike settled the last eight tie after Liverpool striker Luis Suarez had seen his opener cancelled out within a matter of minutes by former Reds forward Peter Crouch.

Now Liverpool, who earlier this season won the League Cup final at Wembley, will be heading back to the north London ground for what could be a Merseyside derby semifinal next month if Everton win their replay with Sunderland.

After a clinical derby win over Everton on Tuesday, Liverpool came into their first FA Cup quarterfinal since 2006, when they last won the competition for the seventh time, in confident mood but they had to dig deep in what was a hard-fought victory over a resolute Stoke.

Tony Pulis’s side, last season’s beaten finalists against Manchester City, travelled to Liverpool for their fourth away tie of this season’s competition and were out for revenge after the Reds knocked them out of the League Cup in October.

Brighter start
And it was the visitors who got off to a brighter start with Crouch wasting a glorious opportunity to head Stoke in front early on.

Ryan Shotton easily broke away from Jose Enrique to cross for Crouch but the former Liverpool front man was caught in two minds about whether to head at goal or across the area and his tame effort was easily collected by Pepe Reina.

Liverpool had made just a solitary change from their impressive derby win over Everton with Jordan Henderson making way for Maxi Rodriguez and it was the Argentine who helped prize open Stoke’s defence.

After a somewhat scrappy start for the hosts, Suarez broke the deadlock in the 23rd minute as the Uruguayan played a tidy one-two with Maxi before finding the bottom corner with a perfectly-placed curling effort.

However, it only took three minutes for the visitors to pull the game level thanks to Crouch, who was left unmarked just six yards out to nod in a corner from Matthew Etherington.

Remonstrated
Reina remonstrated with referee Kevin Friend as he believed he was being blocked from going for the ball by Shotton but all the Spaniard got for his trouble was a yellow card.

Suarez then wasted a good opportunity to set up team mate Andy Carroll but, with the former Newcastle forward lurking in the area, the Uruguayan could only chip the ball into the grateful arms of Stoke keeper Thomas Sorensen.

And Suarez was at the centre of the action again shortly after the break when his glancing header from Downing’s free-kick flew across the area before finding its way beyond the far post.

Kenny Dalglish’s team then got a bit of fortune to put them ahead in the 57th minute as Downing’s pass to Steven Gerrard came off the Liverpool captain’s heels before falling back into the path of the former Aston Villa winger.

Downing then took a touch to take him past Ryan Shawcross before a powerful shot gave him only his second Liverpool goal, the other one also on FA Cup duty in the third round win over Oldham.

Stoke failed to muster up another clear opportunity to get back into the game as Liverpool continually cleared their lines late on and the Potters’ hopes of reaching a second Cup final in as many years slipped away. — AFP

Chris Mckenna
Chris Mckenna works from North West, England. From Drogheda, Ireland now a sports journalist based in England for the Daily Star. Cover boxing and Merseyside football. Views are my own. Chris Mckenna has over 4452 followers on Twitter.
Facebook
Twitter
WhatsApp
Linkedin