Rage against dying of the dream 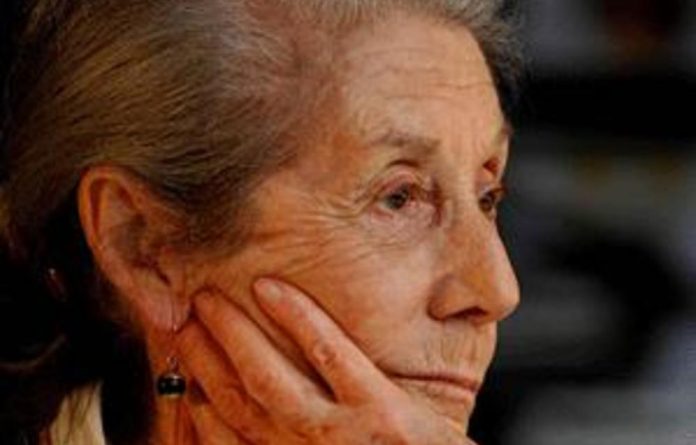 It is certainly not unusual to find a gloomy depiction of post-apartheid society in a new South African novel. A vein of melancholy runs through many recent works of fiction.

More often than not, it is associated with what is regarded as the failure of the far-reaching promise that the ending of formal apartheid made to the present and the future. The perceived betrayal of that promise tends to be associated with a range of emotions, including anxiety, anger and disillusionment.

Familiar as all this is, I found myself taken aback by the vehemence with which it is expressed in Nadine Gordimer’s new novel, No Time like the Present. Behind the enticing irony of the title lies a dark, even bitter denunciation of how the present time has reneged on the promise of social transformation.

No South African writer has had a career that has lasted as long as Gordimer’s, and there is no one who has offered as detailed and sustained an exploration of the turbulent decades to which she has borne witness. Her status as the chief literary chronicler — the keenest observer — of the vicissitudes of our history is unchallengeable.

This gives the dystopian vision of No Time like the Present an added poignancy. The disillusionment is made more affecting and the remonstrance more stinging by the long constancy of Gordimer’s profoundly engaged voice.

Here, she returns to her familiar theme of identity and its complexities and paradoxes. But here she frames it in the context of a quest for normalcy in a country that, a decade and a half after the end of formal apartheid, is supposed to be shedding its egregious abnormalities.

The central characters in the novel are Jabu and Steve, a mixed-race couple who were activists (and cadres) during the struggle, but who now seek what they could never have during the apartheid years: “the normal life, the one that never was”. In the “aftermath known as peace” they buy a house in a middle-class suburb, have two children and jobs that include an element of social upliftment: she a lawyer who offers her services to those who cannot afford legal representation, he an academic who devotes some of his time to establishing bridging programmes and assisting disadvantaged students.

But Steve and Jabu, “revolutionaries become citizens”, find themselves increasingly ill at ease in a present that they never foresaw. In the suburb where they live they have, with their like-minded friends, established a microcosm of tolerance: an “enclave of human variety where at last race, colour, gender are simply communal”. But in the wider society they discover that they cannot find their place in the “map of the new life” that is being drawn. They are disconcerted by the “clashing contradictions” they discover in the society they fought to forge. Eventually they contemplate what had once been unthinkable for them: emigration to Australia.

A model of meaningful human community and connectedness is alluded to in the novel, one that emanates from the ancient world. It comes from the teachings of Epicurus, who, although affirming “human freedom to pursue aspirations, live better, increase pleasure”, predicated that condition on “self-constraint in dealing with others, respecting the principles of justice which ensure that condition’s very existence”.

The dystopian vision of present-day South Africa presented in the novel reveals a society calamitously adrift from the Epicurean ideal.

Instead there is “distortion all round the country of the standard human behaviour it set for itself against that of its deadly past”. The novel spares nothing and no one in its exposure of corruption, political expediency, widespread poverty, xenophobia, violence — including against women — and lingering racism as manifestations of this “distortion”. South Africa, it is suggested, has not attained even a modicum of political maturity: “the country is in its adolescence”.

Possibly the most interesting relationship is that between Jabu and her father, Elias Siphiwe Gumede, known to her as Baba. He is a fascinating figure: sternly patriarchal, yet not wholly predictable in the imposition of his patriarchy — as seen, for instance, in his determination to educate his favourite child, Jabu, before her brothers. But Baba is an implacably chauvinistic Zulu who refuses to see any flaw in his hero, Jacob Zuma, and this places great strain on the relationship between father and daughter.

Gordimer has always dismissed the view that white writers should not write about black experience, and vice versa, and rightly so. In refusing these strictures, her fiction emphasises what people of different racial groups have in common rather than what separates them. In addition, the creation of characters from more than one racial group offers a constructive ideological assertion, which is that a shared humanity is more important and more deserving of the attention of writers and readers than the divisive categories of race.

The only consideration — as in the fashioning of any literary character — should be authenticity and, in this instance, I believe it to have been achieved: the black characters in No Time like the Present are satisfyingly complex and full in the rendition of their humanity.

Gordimer’s acclaimed keenness of observation is evident throughout the novel, but it is not unerring and there are several disappointing lapses. These include inaccuracies in the references to the structures, procedures and nomenclature of university life, as well as errors in the description of an orthodox Bar Mitzvah ceremony.

Depictions of gay people or gay lifestyles have never been her strong point and here a bizarre element is introduced in the long-discredited suggestion that homosexuality constitutes a separate or discrete “gender”, a “third sex”.

There is a more serious problem than these, however, in No Time like the Present, and it is one that is ­discernible in all Gordimer’s recent fiction. It has to do with the question of style. For me, truly memorable writing will always be a satisfying coincidence of content and style. No matter how absorbing the content, the writing fails to engage me fully if the style is not equally compelling.

In prose, style is achieved largely through the construction of individual sentences and the rhythm of sentences within paragraphs. One of the reasons I return again and again to the early Gordimer and certain works of the middle period is to delight in the virtuosity of her style. The near-perfection — diamond-like in its precision — of short stories such as those in Six Feet of the Country or Friday’s Footprint owes as much to stylistic accomplishment as it does to the acuity of the insights provided.

But this is no longer the case and it has long been a source of considerable disappointment to me. Gordimer in recent years has made very poor stylistic choices and the results of this are all too evident in No Time like the Present, as they have been in works such as Get a Life and The Pick-Up. Instead of the consummately crafted sentences and resonant rhythms that drew me at an early age to her prose, what we find now are contorted, jagged, clanging sentences, as far from being sonorous as cacophony is from music.

It is extremely difficult to make sense of many of these sentences. Some of them consist of clauses heaped upon clauses, so that one has to read them over and over again to try to understand them, and others are sentence fragments so truncated that they, too, are opaque.

Here are two examples, chosen from pages where the book happened to fall open: “She is not the eagerly confiding, open young one, his girl in the Swaziland discovery of sexuality as a natural part of political discovery: you were not white, she black in the risk of prison, torture threat to both on your short-lived existence that was set fighting to end existing categories of power, custom, what-have-you and create in their country a human one out of all the divisions bedevilling the hideous past.”

And: “Unaware of its significance between these two at the consultancy seminar on Thursday, a hotel one of whose five stars was a Thai sauna and karma massage centre neither had ever heard of.”

Faced with daunting sentences such as these, the reader has two options: either to spend time ­struggling to disentangle them, or simply to skip over them. The first interrupts the flow of the reading experience, and the second means the import of the sentences is lost. Neither response is what writers wish for in their readers.

Consequently, although No Time like the Present interests me greatly for what it has to say about our complex society, I do not find it aesthetically gratifying. I will always read any new work of Gordimer’s and will remain intrigued by what she has to say, but it is to her earlier writing which played such an important part in opening up my understanding of the country in which I live, even as it helped to introduce me to the pleasures of South African literature — to which I shall return.

David Medalie is a professor in the department of English at the University of Pretoria. His publications include The Mistress’s Dog, a collection of short stories (Picador Africa, 2010)