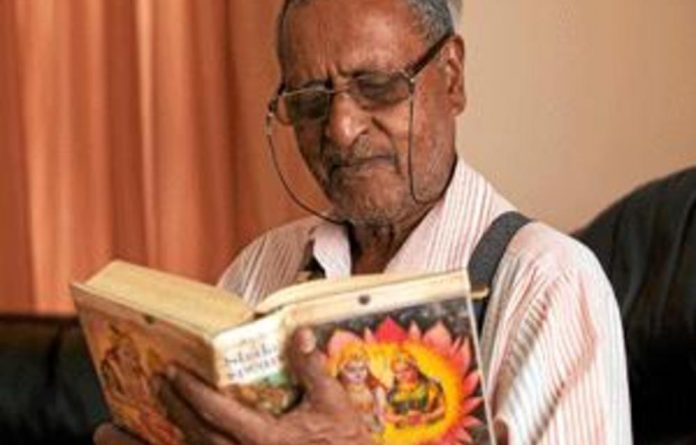 Ashwin Desai builds his book around a compelling story. Sonny Venkatrathnam had been, since his student years at the then University of Natal, so intrigued by Shakespeare’s plays that when he was incarcerated on Robben Island he was determined to keep his copy of the collected works with him in his cell.

Officially prisoners could keep only the Bible and so, covering his Shakespeare with pictures of Hindu deities taken from Deepavali cards, he claimed that it was his “Bible”. He kept his cherished book.

When Venkatrathnam was preparing to leave the island at the end of the 1970s, he asked his comrades in the single cells to sign his Shakespeare next to lines that spoke to them. His request resulted in a remarkable set of signatures and choices.

To round out this story, Desai has interviewed many of those who signed. They belong to several parties besides the ANC, suggesting that camaraderie on the island was born out of shared suffering and that mutual respect transcended party loyalties. Neville Alexander remembered the debates that he and others from the Unity Movement had with Walter Sisulu and Nelson Mandela on the meaning of “national groups” in the Freedom Charter.

Alexander contended that an emphasis on race and ethnicity clashed with the ideal of national unity. He said that their “Socratic dialogue” continued at weekly intervals over two years and that wide reading, such as Trotsky’s History of the Russian Revolution, supported their debates. Significantly, they eventually agreed to differ.

At the heart of Desai’s book is the view that “Reading changes our lives, and our lives change our reading”. Accompanying this interaction is the drama of personal meaning that Shakespeare’s poetry took on for each prisoner.

Eddie Daniels of the Liberal Party chose lines uttered by Macbeth: “Tomorrow, and tomorrow, and tomorrow/ Creeps in this petty pace from day to day/ To the last syllable of recorded time.” His choice may have arisen from the monotony of prison routine, but there is another possibility about which Desai speculates. Macbeth, who had killed his king in order to gain the throne of Scotland, now despairs and thinks that his deed has merely “lighted fools to dusty death”. Daniels, too, might have known despair when one of his fellow saboteurs in the African Resistance Movement turned state witness against him.

Mandela chose lines from Julius Caesar, another play about the use and abuse of power: “Cowards die many times before their deaths/ The valiant never taste of death but once.”

Here the speaker is Caesar himself, facing the possibility of betrayal and death with steady determination. Mandela’s choice suggests a much more positive sense of personal history.

There is evidence that Mandela knew Shakespeare’s plays well for some decades before Robben Island. Daniels, on the other hand, had had no secondary education and encountered Shakespeare for the first time in prison. His reading was, he said, a beautiful “voyage of discovery”. Both were drawn by the sheer pleasure of resonant words, as well as by the relevance the lines had for their beliefs and purposes.

Not all of the signatories have been politically prominent since their release and not all of them focused their prison reading on Shakespeare. After his release, Sedick Isaacs chose a career in medical biometrics. Ahmed Kathrada’s prison notebook recorded authors who ranged from Turgenev to LP Hartley, to the Bible, Thomas Mann, Elsa Joubert and Andre Brink.

This story of reading is also a story of the value the prisoners put on education and self-discipline as they, in philosopher Antonio Gramsci’s words, squeezed blood from a stone. Mzwandile Mdingi said that Shakespeare gave him insight into the ­society and politics of pre-industrial, pre-capitalist England. In turn, he, with several others, gave literacy training and basic political education to ordinary prisoners. He speaks, too, of the importance given to ethical standards in the daily life of the prison community, saying that it was a vital preparation for future freedom. Imagined here is life beyond apartheid as well as life beyond prison.

Desai’s story contrasts strongly with the one told by Jonny Steinberg in Numbers, in which notorious gangs rule prisons such as Pollsmoor. A brutal gang loyalty controls life outside as well as inside the walls. It is a world in which an alternative future cannot be imagined, in which the prisoners themselves participate in their dehumanisation, in which all hope is ruthlessly eliminated.

Both worlds exist, and so we owe much to Desai for bringing forward one in which reading, imagination and political ideals could go hand in hand.

Robben Island has simplified into legend, but Desai’s glossily illustrated book brings the daily achievements of those prisoners to life again. Their vision and fortitude reminds us of what is missing from our world of patronage, cronyism, greed and corruption.

GDP is stuck in the doldrums