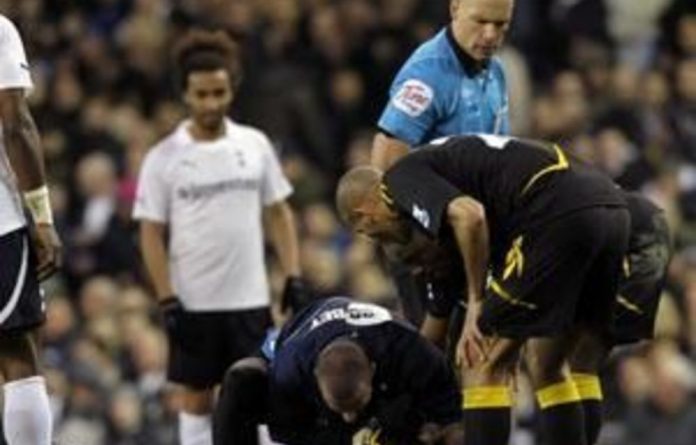 Manchester City will have the chance to revive their faltering bid for the Premier League title as the whole of the English, and indeed global, game continues to wish Fabrice Muamba well.

There has been a sense of the sport being “on hold” in England since Bolton midfielder Muamba’s frightening collapse with a cardiac arrest during last weekend’s FA Cup quarterfinal away to Tottenham Hotspur at White Hart Lane.

But although the former England Under-21 international remains in an intensive care unit, increasingly encouraging medical bulletins regarding his recovery should lessen the understandably sombre mood in the Premier League.

Victory for a City team beaten last time out at Swansea will see then close to within a point of champions and local rivals Manchester United at the top of the table.

Italian manager Mancini must now decide whether Wednesday is the right time to bring back temperamental, if talented, forward Carlos Tevez who went into a self-imposed three-month exile at home in Argentina after falling out with the City supremo in a Champions League clash back in September.

Sharpness and fitness
City defender Joleon Lescott insisted the squad would have no problems welcoming back Tevez into first team action.

“He’s like a new signing. He’s not been injured so he is not going to be struggling too much in terms of sharpness and fitness,” Lescott said.

“All the boys are excited and can’t wait for him to get playing again,” the England international added.

Roberto di Matteo takes a fifth-placed Chelsea side to Eastlands in search of a fifth straight win since he succeeded the sacked Andre Villas-Boas.

Fernando Torres has finally found the net with the Spain striker scoring twice in the 5-2 FA Cup quarterfinal win over Leicester on Sunday to end a goal drought of five months.

The battle for third and fourth, and the Champions League places they bring, is almost as intriguing as the title race.

Confident mood
Arsenal, whose position at one stage this season left many observers pondering on whether manager Arsene Wenger had been too long at the Gunners, are now just a point behind third-placed Tottenham and three clear of Chelsea.

They have won their last four games in all competitions and will travel to Everton on Wednesday in confident mood.

“We have had some really good wins, away at Anfield, at home to Tottenham and Newcastle, and AC Milan too even though we didn’t qualify,” said Arsenal teenager Alex Oxlade-Chamberlain.

“It drives you on to want more of that success.”

Tottenham, who were the team of the season early on, have had a slump of late with three straight league defeats preceding last weekend’s Cup tie, abandoned out of respect to Muamba’s condition.

Spurs players have all since had heart checks but it is their nerve that will be tested mainly when, in their first match since Muamba took ill, they face Stoke at White Hart Lane on Wednesday.

‘Augmented’ level three has me conflicted. I’m happy more people will be able to go back to earning a living, but case numbers will rise
Read more
Advertising
Continue to the category
Politics